Writing my first episode of EastEnders

Sophie Woolley is a graduate from our Writers' Access Group for disabled writers. She recently got the opportunity to be part of a new writers' scheme at EastEnders which has led to her writing her first full episode of the show. Sophie explains how the process worked below.

Watch Sophie's episode on Wednesday 16th June at 8.35pm on BBC One or on BBC iPlayer

At the first ever Writers Access Group workshop, Anne Edyvean (the former Head of BBC Writersroom) told us that we would get work at the end. She was right. My second TV credit, and first episode of EastEnders airs on 16th June.

EastEnders was part of my life growing up in Brent, and later East London. Soap operas were the first shows on TV to be subtitled, which meant my Deaf mum could watch with us. When there was a good doof doof ending, my mum (a TV actor/producer herself) would lead a round of applause long after the credits.

Until I joined BBC Writersroom, I mostly made my own work as a writer and performer, which helped me develop my voice and confidence. I wrote for radio and theatre and I got my agent (for acting and writing) after starring in Cast Offs on Channel 4 (produced by Eleven Films).

Thanks to the efforts of Amira EI Nemr and Marigold Joy in setting up the BBC Writersroom Writers' Access Group in 2019, my name was on the industry radar. In 2020, I had a Zoom panel interview with the executive producer of EastEnders Jon Sen and three producers. They asked me to train as a writer on the show – to write a shadow script, following the same process of a real episode. The trial was supported by the show’s brilliant development producer, Kieran Grimes. He worked with me to practice the leap from the story document into making the scenes my own, writing in the voices of the show, the subtext and actions and hitting the turning points.

When the trial ended, the producers offered me a commission to write an episode for real. I was so excited to be writing for EastEnders! 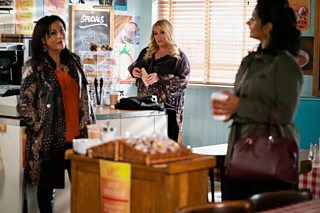 The job started with a commissioning meeting for the block, where the writers ask questions about their episodes. The executives, script editors, schedulers and researchers and writers are at this meeting, and the Story document for the block goes out a few days before.

With my first episode, there were lockdown Covid restrictions in place, and so I wrote a scene breakdown for the scheduling team to check. Actors were in silos, meaning the different groups could not cross in scenes.

As a new writer on the show, I was well supported by the development producer Kieran, and script editor for that episode, Sophie Peters. Different producers and editors read different drafts. The executive producers read the second draft along with the other episodes in the block. They have a one-day meeting about the week of episodes. That’s when there can be some big changes, based on how the stories are working across the whole block. There might also be changes for continuity with the other episodes in the block through the early drafts. 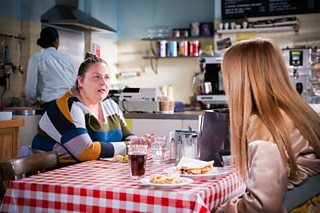 The length of notes usually gets less over the course of the five drafts. On my first episode I also had a fabulous EastEnders core writer mentor, Pete Lawson, who told me that we all get certain types of notes in the beginning. It helped to know that everyone goes through it as we learn the show. By the last two drafts there are just small tweaks and the turnaround is shorter.

The writing schedule is intense and fast. There are a few days off whilst waiting for notes for the first and second draft. In order to deliver, I learnt not to fill the days off with meetings for other work, and actually take some time off. Time management is important – sticking to writing a certain number of scenes per day. Ideally I want a day or so to read and tweak before the 9am deadline.

After getting notes on a draft it’s good to read them, put them away for a bit, have a think, note down any questions for the editor, make a plan and then get on with it. There isn’t time for anything else. I was grateful for the astute clarity and directness of the notes on EastEnders, as well as the trust and collaborative process. 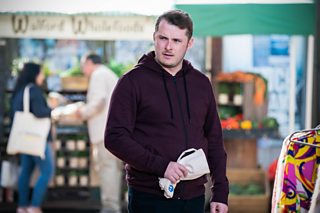 I loved being part of the huge gang that creates EastEnders. I also liked digging deep into my memory bank for different types of colloquial, London speech. Working on the show has stretched me and used my strengths as a writer in a way I’ve always dreamed of.

I also use my Deaf experience – of all the different Deaf identities that I’ve had over the years, as well as being from a Deaf family, speaking and signing, and now as a self-described deaf cyborg.

Tips for writing for continuing drama. Go for it – you can do it (by learning how to do it). Trust in the process. Do something nice whilst you’re waitingnotwaiting for notes.

Watch Sophie's episode of EastEnders on Wednesday 16th June at 8.35pm on BBC One or on BBC iPlayer

Find out more about Sophie Woolley on her website

Together - In Conversation with Dennis Kelly