Ben Rawson-Jones is a freelance Social Media Producer who started his career setting up and running the official feeds for The Apprentice and The Great British Bake Off. He then moved to BBC One as their Social Media Executive, leading campaigns for Doctor Who, Poldark, The Missing, Doctor Foster and Our Girl before leaving to run The Crown’s social accounts for Netflix and work as a part-time Social Media Creative Director on EastEnders.

Social media is seen by some as the scourge of good television drama. The battle to avoid spoilers for fans of shows like Line of Duty, Game of Thrones and Killing Eve has seen Facebook, Twitter, Instagram and the rest take on the role of the archetypal antagonist that seeks to thwart your goal. Yet social platforms are also playing an increasingly prominent role in connecting audiences – especially younger ones - to the narratives and characters of drama. Not through hubristic marketing pushes or tacky memes, but with creative extensions that aim to immerse the audience even further in the story.

The Rise Of Television Social Media

When I first began working in the social media industry (in the dim and distant world of 2010), it was very much the domain of entertainment and reality shows. Setting up and running social feeds for the likes of The Apprentice and The Great British Bake Off involved plenty of dubious punnery and whipping up excitement in a jazz-handed manner. But soon patterns emerged as posting plans started to take on a fixed narrative structure that would play out during and beyond the episode.

Potential heroes and the challenges they faced were foregrounded, with the hopeful audience only uncrossing their fingers to launch supportive tweets. One main protagonist would tend to emerge, often needing to overcome their self-doubt to stand any chance of success in the final act. If the hero/heroine were successful, the joyous audience would be treated to a self-reflective speech that highlighted their character growth since the beginning of the series. Such words are social gold that would travel far and wide…

The Move to Drama

In contrast, until a few years ago, coverage of dramas on social media tended to be limited to marketing pushes driving people to broadcasts alongside reproducing key moments, such as a nice character quote. It was more a case of replication than doing anything consistently creative alongside broadcast of the fictional material. However, a turning point emerged with the first season of Sally Wainwright’s BBC One drama Happy Valley.

Running the reactive social media campaign during the broadcast, I sought to turn the Twitter feed into an emotion-led individual rather than a detached curator. A viewing companion for those who can’t resist ‘second screening’ on their phones or laptops while a show unfolds.

My aim was for the commentary to really root for our heroine, Sarah Lancashire’s beleaguered Sergeant Catherine Cawood, and react in a way designed to relate to the feelings of viewers sat on their sofas watching at home. Through studying each episode in advance of the broadcast, I identified the key character moments and turning points in the plot, and shaped these into posts.

The tone of voice was crucial and derived from the empathy and determination of Catherine Cawood. It needed to have a sense of urgency and convey the high stakes of the drama unfolding on screen, while also knowing when to release the grip in line with the feelings of the audience.

This approach proved successful, with social posts being shared widely on young-skewing platforms and attracting new audiences to the show.

Following this success, more time and investment was accorded to drama coverage, with talented design teams coming on board to work on priority productions, ensuring that social media posts looked suitably ‘premium’.

The social campaign for period drama Poldark’s first season built on this, connecting younger viewers to a genre that traditionally skewed towards an older audience by focussing on emotion in a way that didn’t feel stuffy or traditional (but also didn’t betray the narrative tone).

Being ‘social’ on social media and giving viewers a voice proved pivotal too, with key character choices put to those at home for their verdicts. This helped to draw people closer to the story and to take them inside the heads of the characters, which heightened reactions to later dramatic (and sometimes devastating) payoffs.

The launch of Doctor Foster in 2015 built on Happy Valley’s strategy of getting us all rooting for the scorned lead. As with many new dramas, it was slow-going at the beginning of the series in terms of engagement on social, as people were still getting to know the characters and forming their allegiances. I played the long game, as seeds were sown with posts such as this inciting incident in the first episode:

Unlike a conventional marketing push where the impetus is around the premiere and the season finale, the smart strategy for social is to build each week – leading into a finale where the payoffs arrive and the engagement goes through the roof. 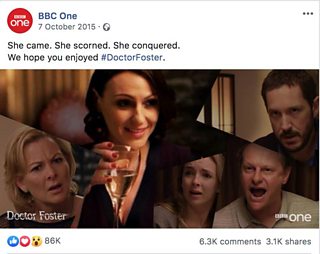 The next evolution was to use a show’s social platforms for more than just promotion and reaction. This of course relies on the writer, production and cast being game.

BBC One’s Our Girl is a great example of the value of social media in creating a devoted audience that’s highly emotionally invested. The fledgling show, about female medics in the British Army, was scheduled opposite the then ratings juggernaut X Factor for its first season in 2014. Gulp. While the ratings were steady, it emerged as the most tweeted about new drama of the year and cultivated a young, devoted (and mainly female) online fanbase from scratch.

The show was supported by ‘narrative extensions’ that played out on social after every episode, in the form of a series of letters.

These letters were written home to loved ones by the soldiers. That concept stemmed from a brief scene in the opening episode where we can see a few of the soldiers scribbling away in their overseas army base. Wouldn’t it be interesting to read their intimate thoughts?

I was very privileged to work with Our Girl’s creator and writer Tony Grounds on assembling these letters each week, which expanded on key emotional beats and plot developments just witnessed. They brought the audience closer to the protagonists – and encouraged deeper emotional investment in the story.

Later seasons of Our Girl not only shifted the protagonist from Lacey Turner’s Molly Dawes to Michelle Keegan’s Georgie Lane, they also developed the social extensions. Gone were the old school letters and in were the mobile phones. These posts offered the now well-established fanbase something special, that they felt was ‘just for them’, alongside helping to engage with potential new fans.

Of course, this requires the drama’s writer to understand the value of social media extensions to the world they’ve created and be open to them, something which Our Girl creator Tony Grounds has embraced. As he explains: “Social media is here to stay and dramas need to embrace it. It will get bigger and bigger. Influencers are becoming more important than reviewers, who no one reads. The success of a show is as much about word of mouth (in which social media is key) and the actors using their fan base to get people to tune in.”

However, Tony Grounds also thinks writers need to develop a thick skin… “Someone once said to me social media was like diving into an amazing ocean... until your programme actually transmits then you realise you are clinging on to a sewage pipe and you have to cling on tight as the s**t and vitriol smash you to pieces. It’s part of the real world, albeit a very small part, and often the s**t is the stuff that sticks rather than anything pleasant, but I’m not sure the noisy ones reflect the nation. So part of me thinks no writer should go near it, but... it’s too tempting not to dive in.”

Social media extensions to drama also have the ability to push the limits of the world and develop it in a way that would never happen within the traditional television broadcast.

This year on EastEnders, I wrote a special fake preview scene for April Fool’s Day that was incorporated into the filming schedule and featured stars Danny Dyer, Ricky Champ and Luisa Bradshaw-White all in character. It started off like a normal scene, but the boundaries of plausibility were soon pushed. The clip quickly racked up over one million views on Facebook and garnered positive media coverage. All credit to the EastEnders production team for seeing the value of social and making this happen.

Much like ensuring character voices remain distinctive in a script, finding the right tone of voice for a social campaign surrounding a drama can be pivotal to its success and also extend the world to a younger audience.

As an example, I worked on the Twitter feed for the first two seasons of Netflix’s The Crown. The intent was to embody the essence of the young Queen Elizabeth II in the personality of the social platform – to mimic her voice and even interact with the audience ‘in character’. Obviously, a twenty-something monarch from the 1950s hasn’t been swept up in a time storm and transported to the present day in order to tweet. No amount of persuasion could entice writer Peter Morgan into incorporating that as a subplot!

To achieve this, I had to comb through the scripts and episodes, noting down key phrases and recurring words spoken by the Queen – and also her rhythm and flow of speech. Not unlike a sportsperson training their muscle memory, a writer can imbed a character’s voice in their head with a lot of hard work.

And how does the show benefit from this? The payoffs involved plenty of fun and increased interaction, really helping to drive attribution and loyalty towards the show by giving it a clearly defined personality.

With the social media juggernaut growing and being so embedded in the lives of young audiences, how long is it before continuing dramas and soaps seek to not just incorporate but start running the fictionalised social media lives of their characters? It’s hard to imagine a Phil Mitchell Instagram feed (presumably it would solely feature awkwardly framed, filter-free photos of fry-ups from Kathy’s café), but many of the characters in the soap world do have social feeds and are often seen scrolling away and taking snapshots to share.

A precedent has already been set by SKAM, a Norwegian series about a group of teenagers that played out solely using social media posts and mobile communications between the characters. It was snapped up by Facebook and remade in the United States last year as SKAM Austin. Could it be a sign of things to come for an industry that needs to reach younger audiences?

My Experience as Radio Drama Writer in Residence