We’re delighted to announce the 3rd generation of Welsh Voices. Meet our 19/20 group. This talented bunch will be joining us on a year-long development programme consisting of masterclasses, workshops, industry introductions and bespoke writing opportunities. This year we’re joining forces with Sherman Theatre under the new artistic leadership of Joe Murphy, and will once again be working with Audio Drama Wales to provide our writers with the greatest breadth of knowledge across a portfolio of media. Most importantly the group is designed to create a supportive community for writers to come together in order to develop their best work. Make note of these names and faces. We guarantee you’ll be seeing more of them in the very near future.... 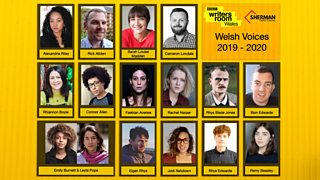 In 2010, Rick wrote a series of short radio plays for Berlin University that toured South Africa in a giant football.  Rolling with it, he began to write short plays that have since been staged across the UK and US. In more recent years his plays have both lengthened and migrated homeward.  Death and The Monster and Humanzee were staged at Chapter Arts Centre, Cardiff and Rachel and The Photographer at Blackwood Miners’ Institute. Rick also has several short stories published, and was shortlisted for Wales Writer in residence 2019 for his audio drama Moonlight Grey.

Rhys is a bold emerging queer artist from the Rhondda valley, working cross-disciplinary through theatre, cabaret and craft. Winner of the inaugural COMMON Award in 2019, Rhys was supported by The Pleasance Theatre Trust to take their debut show The Land of My Fathers and Mothers and Some Other People to the Edinburgh Festival Fringe where it enjoyed critical success. Rhys learnt tits and teeth showmanship watching pub singers and psychic mediums in back rooms of rugby clubs.  Rhys’ performances tread the line between cosy and confrontational, making work that’s fun, silly and full of heart.

Emily and Leyla started writing together after their individual scripts were shortlisted for It’s My Shout / BBC Writersroom 2018. Together, they kindled a relationship based on the hope of telling wholly inclusive stories with a diverse range of characters. With close family and friends as the impetus to highlight the importance of these stories, Leyla and Emily are passionate about female led, disability aware, multigenerational storytelling. This can be seen in the script they are currently developing, Going Country.

Elgan Rhys is a Cardiff-based writer-director-performer, Co-Artistic Director of Cwmni. Pluen Company, and Associate Artist at Frân Wen. Elgan’s play Woof at the Sherman Theatre, was described by The Guardian as “a triumph”. Pluen’s most recent production, Mags, which Elgan wrote, toured Wales and London and was described by Wales-Arts-Review as “a fearless play.” Recurring elements in his work are the amplification of young people’s voices and telling stories of contemporary queer life.

Sion is  a bilingual writer from Dolgellau in North Wales. Sion’s sitcom Halfway was shortlisted for the BBC wales / Writersroom Find Me Funny initiative. Subsequently it was produced and broadcast in 2018 across multiple platforms as part of BBC Wales’ Festival of Funny. Sion was then selected for the six month development scheme BBC Writersroom  - Comedy Room 2018. Sion has written short plays for Dirty Protest Theatre, which were performed at the Galeri in Caernarfon, Eisteddfod in Cardiff and at Machynlleth Comedy Festival. Currently Sion is working on a new ideas for radio sitcoms or podcasts.

Sarah Louise is an actor and former secondary English teacher. On a longshot Sarah entered the Wales Writer in Residence 2019 and was subsequently longlisted for her drama You, the Jury: a provocative script about domestic abuse, gender, presumptions and justice. This acknowledgement has given sarah the confidence to transform her writing from a hobby, to putting her voice out there and finally articulating what she’s always wanted to say.

Born and raised in Wrexham, Rachel initially trained as an actress and fight performer. After graduating she formed MISSMANAGED THEATRE COMPANY. Her first play The Edinburgh Test was shortlisted for the Charlie Hartill special reserve fund. Her following play Bounce was long listed for the Papa Tango prize. Rachel made her full length debut with Rattled at The Old Red Lion Theatre, a one woman show performed by herself for which she received an Offie Nomination for Best Female Performance. Rachel is currently developing several projects for film and TV.

Connor is an actor and writer from Newport who began writing in 2015 for an National Theatre Wales event; Stories of the Streets. Subsequently he has written short plays for companies such as Dirty Protest, Fio, No Boundries and Avant Theatre. Connor is currently working on his full length debut play Working Not Begging which will be in production in 2020. Connor is also part of the Gary Owen/Royal Court - Welsh Writers Programme.

Alexandria is an actor and writer based in Newport. Alex started writing at University and her first drama "What About Love"  was performed at Dolman Theatre Newport. Subsequently she wrote four shows for a local performing arts group, all of which sold out at "The Riverfront Theatre" - Romeo and Juliet - the streets,  Make or Break,  Sisters Acting Up, and Hard Knock Life. Most recently Alex  wrote and appeared in her own documentary Mixed which aired on BBC One Wales and BBC iPlayer. She’s also written an episode of Torchwood for their audiobook series named A Mothers Love.

Jodie has had two short films produced, Leonard's Neighbours (It's My Shout, Best Film, 2016) and one minute film The Machine (Focus Shift Films, shown at BAFTA qualifying festivals). She also has another two in pre-production. Her first feature script, Walnut, made it through to the penultimate round of the 2018 BBC Writersroom Drama call out and she is currently writing her second TV pilot, Fathom. Jodie is currently a story editor on Casualty as well as a freelance script editor. She is a script mentor for It's My Shout and is on their board of directors

In 2007 Rhiannon became Dirty Protest Theatre's first ever ‘Cherry Popper.’ Subsequently she has written many plays including - The Whole Truth, Latitude Festival, Un bach Arall, National Eisteddfod, Kindness, WMC, Druggie, Edinburgh Fringe 2019 and Disquiet at The Other Room. Screenwriting credits include S4C’s Gwaith Cartref and children’s comedy sketch show Cacamwnci. Rhiannon was awarded the inaugural Wales Writer in Residence 2019. Her winning script, Because of Him has been commissioned for broadcast on BBC Radio 4. She is currently on a 6 month bursary with BBC Wales before beginning a 6 month residency with National Theatre Wales.

Faebian is an actor who began writing in 2018. Her debut play Detention enjoyed sell-out runs in both Cardiff and London, achieving a 5* review on opening night and has now been picked up by a company in residence in Croydon.  A section of Faebian’s one woman show Two Flats on Clifton Street was selected to be performed at Chippy Lane’s ‘Who Run the World?’ event. It gained interest from industry professionals and has since been performed in its entirety in London.

Cameron  is a comedy writer from Swansea who has written for several BBC Radio 4 shows including The News Quiz, Breaking the News and Newsjack.  He co-created The Royal Winthorpe Museum Podcast and his sitcom script Gaffer reached the final of the David Nobbs Memorial Trust competition.  Cameron writes and produces sketches, short films and podcasts. In 2019 he formed Encouraging Productions with the aim of making original comedy to get excited about. Cameron is currently working on comedy ideas for TV and radio.

Rhys trained at the Royal Academy of Dramatic Art, graduating with an MA in Text and Performance in 2017. He has written and directed various projects in theatre and audio drama. His credits include, Not John at the Gielgud Theatre (RADA Festival, 2017), The Count of Monte Cristo at Merchants Hall (Edinburgh Fringe Festival, 2015) and Insane Assumptions at the Mike Barlow Theatre (Cardiff, 2013). He also co-created and wrote numerous episodes of the Radio Cardiff soap Sophia Square. Rhys was shortlisted for the Wales Writer in Residence 2019 with his script Forget Her Not.

Remy is an actor and writer, who trained at RWCMD. Since popping her cherry for Dirty Protest in 2016 Remy has been developing work with numerous television production companies such as Sharon Horgan’s Merman and with Ruth Jones at Tidy. This year she performed her debut one-woman show Do Our Best at Edinburgh festival, for which she gained rave reviews. She has been supported by new writing company Paines Plough and the inimitable Dirty Protest . Remy is currently working on a TV project headed by Mackenzie Crook for the BBC.

Welsh Voices is an invitational only development group. Writers are selected in conjunction with our partner organisations and predominantly chosen via their submissions to BBC Writersroom initiatives.

Writing Vienna Blood - Hear from the Novelist and the Screenwriter