Here, in the BBC Writersroom, we are in the final throes of doing second full reads for Scriptroom 5, our inaugural genre specific TV/Film Drama window.

I will give you the cold hard numbers:

There were also 44 verdicts of “writer has not met the brief” which means that 3% of submissions were submitted for the wrong genre or medium.

Character, story and dialogue – or the lack thereof – were the top three reasons our readers noted for giving a “no”. Hopefully these statistics may lead you to think about your first ten pages. We here, at the Writersroom, have been talking a lot about the importance of these pages. I encourage you to check out the opening scenes of the first episodes of Happy Valley and In the Flesh from the BBC Writersroom script library. They are strong examples to illustrate really successful set-ups for story. But that’s not what I am going to dedicate this blog to. Rather, I am going to address something altogether mundane: spelling. 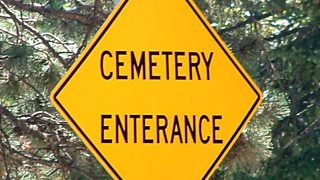 I’ll admit it: I never took grammar classes. Somewhere during my schooling, it slipped through the net. I moved to America for my final two years of high school where my classmates were lugging around well-worn Borzoi handbooks.

In ninth grade, they endured weekly classes that explained such intricacies as how adjective clauses modify the object of a preposition. And where to put a comma after quotation marks. I have systematically attempted to avoid using complex grammatical formulae. Instead, I try not to write run-on sentences by employing a healthy dose of full stops. My rule of thumb for grammar is: if you don’t know how to use it, don’t use it. Or, find out exactly how to use it correctly. (I suspect this may be a red flag to a bull for some of you in the comments section!)

However, I am fanatical about spelling. I am not sure if it grew from the promise of a chocolate bar for the winner of my third grade spelling bee or the need to find something I could be good at in light of an inability to master times tables. This was before we were using computers for word processing. This was before electronic spellcheck. This was when we still looked up words in a dusty, paper dictionary.

Perhaps it’s because words are the currency of my work, I feel very pedantic and protective of them. They should be spelt and used correctly. I believe writers carry this responsibility. It’s a responsibility to their work – not just to the words themselves. It shows care and respect. It shows they have read over their work carefully and checked that each word is being used for its correct meaning. 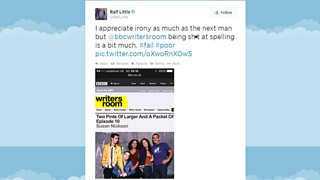 Ralf Little points out that even the BBC Writersroom makes mistakes...

I’ll admit it, we all fail sometimes. It took a pointed tweet from Ralf Little to point out this error on the BBC Writersroom website: TWO PINTS OF LARGER. Rarely a day goes by when I don’t find a spelling mistake in an online news article from a reputable source. If you – like me - have a slightly obsessive tendency to follow news feed banners at the bottom of television screens, I am fairly confident you will find a boo-boo or two over the course of a news broadcast. It’s an epidemic. And it’s lazy.

“Their” or “there” . “Your” or “you’re”. These are the most common mistakes in the scripts we receive through Scriptroom. You may think these are little or negligible things but when you’re reading a high volume of scripts, it begins to grate enough that it actually draws attention away from the narrative. It pulls the reader out of the story. It may even make you start to think bad thoughts about the writer. I would venture to say, it sometimes makes you feel resentful. How hard can it be to check the spelling of the work you are hoping will launch your career? Please be extra vigilant about the usual suspects and please don’t consider using an ampersand instead of “and”. Take pity on the readers who just want words to be used correctly. Take pity on the words who just want to be understood. But, most importantly, take pride in your writing and allow your script to put its best foot forward without the distractions of spelling mistakes. Especially in those first ten pages!

The Script Room for Children's Drama, Comedy and Animation is open from midday on Monday 23rd June until midnight on Monday 7th July inclusive. Full details

To Hull and Back: From winning BBC New Comedy Award to Radio 2 sitcom

News and Advice from Room to Write, with BBC Scotland Comedy