Meet the Writers of The Break 5 on BBC Three 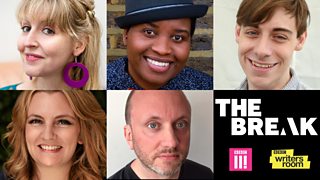 BBC Writersroom and BBC Studios Drama Production have announced the five writers who have penned the fifth series of The Break. The bold, short form drama series, now in its fifth year, is a collaboration between BBC Writersroom, BBC Three and BBC Studios and aims to showcase the best original, contemporary stories that reflect modern life in the UK. The short films that make up the series will be available to watch on BBC Three.

The five successful writers are: William Barrington, Angela Clarke, Annalisa Dinnella, Rob Kinsman and Lettie Precious. Each of the writers have disabilities and their experiences are reflected in the stories in all their diversity and humour. Amongst the writers selected this year are three who attended the Writers Access Group, an initiative founded in 2018 that offers talented writers with disabilities the chance to develop their writing skills and secure opportunities across the BBC’s scripted output.

Anne Edyvean, Head of Writersroom said:
“The aim of The Break is to offer writers from under-represented groups a chance to tell an original, surprising and contemporary story for a young audience. And I am absolutely delighted that our fifth series of The Break is written by five talented writers whose scripts are engaging, funny, sad and full of story and heart. Three of the writers have come from our Writers’ Access Group for writers with disabilities, while two have been offered places on our next Writers Access Group.”

Esther Springer, Executive Producer, BBC Studios Drama Production said:
“I’m proud to be working with these talented storytellers. It’s a privilege to be given this opportunity to experience their worlds which are funny, touching and uniquely relevant. I hope this is the first of many opportunities to work with this group of writers and to tell their stories from their point of view”.

About the Writers and their Films:

A university student with Cerebral Palsy has always looked down on people who sleep around, but only because he hasn’t had the chance. His first one-night stand makes him question his views.

London based William graduated from the University of Winchester in 2018 where he made a number of local award winning short films, and in 2019 he received a masters from Royal Holloway, University of London in Screenwriting.

William says: “Growing up with Cerebral Palsy, I often let others speak for me simply because it was easier. However, as I became increasingly interested in making films, I found it was a great way to express my point of view and a BA in Film Production and MA in screenwriting really helped me improve my writing ability. Although I have written several short films, I am thrilled that the BBC have given me a chance to share my work with a larger audience. And, now that I’ve found my voice, I plan to never shut up - so long as actors are willing to perform it of course.”

WEED is about 16-year-old tearaway Liam, who is on the run from ‘the Feds’. Back on the London block he grew up on, Liam is determined to finish his own personal mission.

Angela Clarke is bestselling author of the Social Media Murders (HarperCollins), including Follow Me, Watch Me and Trust Me, and critically acclaimed On My Life (Hachette). Follow Me was named Amazon’s Rising Star Debut of the Month, long listed for the CWA’s Dagger in the Library, and short listed for the Good Reader Page Turner Award. Angela has appeared on CBS Reality’s Written In Blood, has written and performed on stage for BBC Edinburgh Festival (BBC iPlayer), and has hosted BBC 3 Counties Radio show Tales From Your Life. A sufferer of EDS III, Angela is passionate about bringing marginalised voices into creative industries. She is a RSA Fellow.

Would you rather be seen as rude or disabled? That’s the dilemma faced by 18-year-old May as she tries and fails to make her first Fresher’s Week friend.

Annalisa enjoyed a varied career in TV documentary-making before focussing on writing. She has written two afternoon plays for Radio 4 and her first play The Man Who Fell to Earth was nominated for an Imison Award in 2016. Last year, she wrote and presented a show on Radio 4 called Annalisa is Awkward. She is currently working on BBC One Drama Doctors, as well as developing a television drama series and a thriller. Annalisa has 5% vision.

BFF, is about a teenage girl who has become distant from her friends following a car accident that had left her as a wheelchair user, and has developed an attachment with an ‘augmented reality’ pet monster on her phone. Turnip is a flatulent goblin but he’s also Katie Cartwright’s only friend. She’s in trouble.

Rob is based in East Anglia and studied the Creative Writing MA at UEA. He’s an established writer on Doctors with over 60 credits on the show including the hour-long 2000th special episode. Other credits include Father Brown (including the episode The Man in the Shadows which won the RTS Midlands awards in 2015), Shakespeare and Hathaway, Malory Towers and Holby City.

In 2011 Rob was paralysed from the chest down by a rare illness and became a wheelchair user. In his spare time he volunteers with the spinal-cord-injury charity Back Up, teaching wheelchair skills to people with recent injuries.

Young, clumsy, sweet, and queer, Toni wants to ask the girl of her dreams to end of year 11 prom and will stop at nothing to win her affections. Only question is, can she do it without killing her?

Lettie is a poet, playwright and author from Sheffield and now based in London. They won the Royal Court and Kudos Fellowship in 2019. Their short play The Grey Area was presented as part of Queer Upstairs at the Royal Court Theatre in 2019 and their first full length play, This Is Us, is currently in development with theatre company Graeae. Their previous work has been showcased at Soho Theatre, Oval Playhouse, The Arcola and Theatre Royal Stratford East.

BBC Studios, a global content company with British creativity at its heart, is a commercial subsidiary of the BBC Group. Able to take an idea seamlessly from thought to screen, it spans content financing, development, production, sales, branded services, and ancillaries from both its own productions and programmes and formats made by high-quality UK independents. Award-winning British programmes made by the business are internationally recognised across a broad range of genres and specialisms, including factual, drama, entertainment and comedy. BBC Studios has offices in 22 markets globally, including six production bases in the UK and production bases and partnerships in a further nine countries around the world. The company, which makes around 2,500 hours of content a year, is a champion for British creativity around the world and a committed partner for the UK’s independent sector. Created in April 2018 by the merger of two existing commercial subsidiaries, BBC Worldwide and BBC Studios, the company has revenue of around £1.4bn. In the year to March 2019, it returned £243m to the BBC Group, complementing the BBC’s licence fee and enhancing programmes for UK audiences.

Lethal White: Adapting the latest Cormoran Strike novel into a new four-part thriller for BBC One