Writing a brand new Doctor Who adventure in Virtual Reality

A woman screamed, a police siren roared, my heart raced. Dispatch was one of the first virtual reality films that I ever watched (as part of a BBC Writersroom day exploring VR storytelling) and was formative to my understanding of what virtual reality stories can achieve. It perfectly captured exactly what makes virtual reality films so unique: the sheer sensory overload of being surrounded by a story that uses light and sound and spatial playfulness to throw you head first into a narrative. 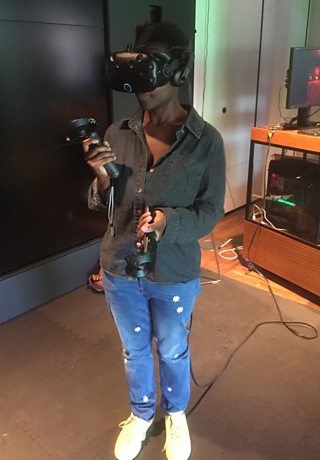 As I dived into the world of VR I discovered how you can hear a bullet whizz past your left ear making you feel like you’re seconds from death; how a flash of flickering light across a room could draw you forward compelling you to walk up a flight of stairs that creak with every step; how you could overhear a heated argument between two characters behind a door, forcing you to decide whether to intervene or walk away. VR is a chance to force the audience to live inside the story in a way that can be thrilling, moving and terrifying. 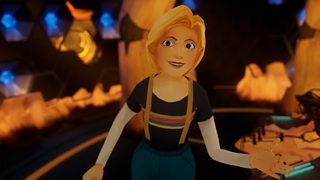 When I was offered the chance to explore the world of Doctor Who through virtual reality, working with director Mathias Chelebourg and Passion Animation Studios, it was always clear that whatever story we chose to tell would start and end in the TARDIS. There was talk of exploring mountainous planets and never before seen worlds with the incomparable Thirteenth Doctor. But it soon became clear to all of us that an entire virtual reality adventure inside the TARDIS would be the most electrifying of all. What could be more dramatic than being immersed in a story where you’re given the chance to fly the most powerful (and temperamental) vehicle in the universe while hearing danger echoing off the walls around you as a weird and wonderful story unfurled? 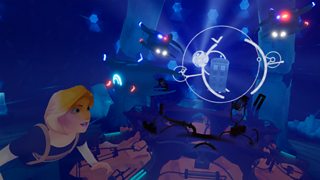 The brief from the BBC’s VR Hub and the Doctor Who script team was clear: this had to be a story that could be loved by existing fans but could also exist as a standalone experience that could be enjoyed by new audiences. Whilst it was vital to capture the unique temperament and dialogue patterns of the Thirteenth Doctor, it needed to be a story that could exist outside the TV series and didn’t rely on existing storylines. To help me develop the story and stay true to the spirit of the new series, I was incredibly fortunate to watch an early edit of The Woman Who Fell to Earth and walk the TARDIS set months before the new iteration was launched to the world. It was during this time (one beset with many a Non-Disclosure Agreement) that the first seeds of the story started to emerge. 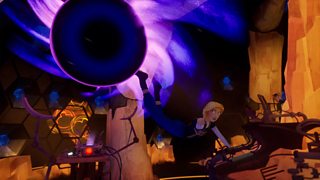 Doctor Who: The Runaway is about the TARDIS in crisis. It’s about being trapped in a disintegrating vehicle where you must make impossible choices in order to save an alien (Volta; named in honour of Ghana’s pioneering hydroelectric dam) that has the potential to destroy the TARDIS and everything in it. It’s about the Thirteenth Doctors’s willingness to break the rules in order to do what she deems is right as you flee a galactic space force that has its own (arguably perfectly reasonable) sense of what is good and bad. It’s about you being forced to engage with the impossible decisions that the Doctor makes every day as you must choose between an alien’s safety and your own survival. The fact it is a virtual reality experience makes the danger more real and threatening as you hear and see and are bamboozled by the chaos engulfing the TARDIS around you.

Overall, writing for VR was similar to the process of developing a TV drama. Script-editing software was opened, countless outlines and drafts were written and shared and the notes were copious. Balancing the new storytelling possibilities offered by VR, with the limitations of the current headsets, and the technical restrictions of what could be visually achieved meant that the script underwent constant refinement as the script executive Sam Hoyle and I developed a clearer understanding of what was possible. 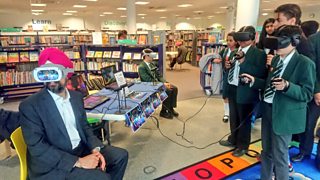 Experiencing Doctor Who: The Runaway at Slough Library, part of the tour of libraries across the country.

While there are now a multitude of ways to experience the Doctor Who: The Runaway, most meaningfully to me, the story will tour libraries across the country. Like most writers I was an obsessive reader growing up. I once spent so much time at my local library that a concerned librarian accused my mother of exploiting the place as free childcare. So it’s incredibly reassuring that libraries continue to be a place of storytelling discovery, and that through the tour (and libraries overall championing of digital technologies) everyone can appreciate what virtual reality stories have to offer.

Find out full details of the Doctor Who: The Runaway tour and when you can try it and other BBC VR experiences at a library near you

Podcast Drama: What Next?