The Passing Bells - an interview with scriptwriter Tony Jordan 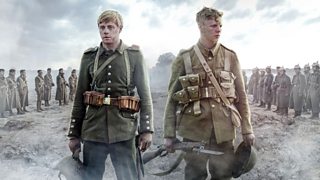 What attracted you to writing the series?

I was interested in telling the stories of the young men who were sent to war, the really young men who lied about their age to be able to go. It meant something to me because I’ve got sons, and although they’re in their early twenties now I can certainly remember them in their late teens. I wanted to tell a story from their perspective, to show what it must have been like for a boy to be sent to the other side of Europe to fight in the most terrible war that has ever been.

Why did you decide to present the war from both sides?

When I was first asked to do this, I looked at the war films that had been done before - everything from period shows to Band of Brothers and Saving Private Ryan. It struck me that they’d all done the same thing and I wanted to do something different. As The Passing Bells is for the Centenary, it had to be different. The one thing that always binds war movies together in that genre is that there are always good guys and bad guys and I wanted to move away from that. In The Passing Bells there are no good guys, there are no bad guys. You’re not sure what’s right, what’s wrong, because that to me is the perspective of the boys that we sent there. The boys didn’t know - they didn’t even know where they were half the time. They certainly didn’t know about the tactics or the nature of a world war because it had never happened before. So it’s written from their perspective. The antagonist, the only bad guy if you like, in the whole thing is the war itself. 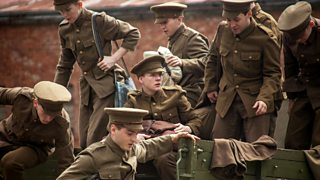 What happens to Michael and Thomas during the war?

Our boys experience the same war, but their journeys are quite different. Michael begins quite sure of himself and confident in who he is and what he believes, yet by the end of the war all that confidence has been knocked out of him and he loses his way a bit. Whilst Tommy is more naive, less experienced in the ways of the world at the start of the war, simply seeing his uniform as a way of impressing the girls, by the end of his war he has grown from a boy to a man.

What differences do we see across the years?

I think there are huge differences between the years. In 1914, certainly on the British side, the boys believed what they were told; it’s going to be over by Christmas, it’s only four months, if you don’t sign up now you’ll have missed it all and it’s exciting. You’re put in a boat and you go to a foreign country and you meet loads of new friends. But that’s a completely different picture to skipping on a few years and suddenly you’re in the middle of the Somme. Then you get to a point where you must be losing all hope - but then hope appears because there’s a sense that the war is coming to an end. Over those five years, it was a challenge to make people believe that time had passed, but I think we did it and that we’ve made a really good series. 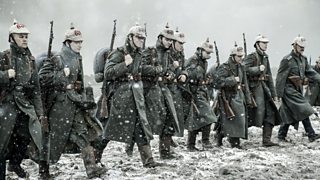 What research did you do?

One of my source materials was a series called Forgotten Voices. What I found fascinating about it was that there were no clichés. It was just about the people that were there and their own stories in their own words. Some of them were surprising. Some of them said, “it was most the most terrible war ever, but I had a great time, I met the best friends I’d ever met…” There were different perspectives and I’d never seen that before. But it wasn’t a history lesson to me. I didn’t want to tell the tactics of the war, who was winning, who was losing and which battles did what. I wanted to tell a story literally from ground level, from the boys in the trenches. Those first-hand accounts were gold dust to me and from that point, the characters started to come to life and I could hear them talking in the tent. I realised that if I stopped thinking of them as soldiers but just thought of them as boys then it would all make sense.

Where does the title, The Passing Bells, come from?

I tried to find a sentence that epitomised the conflict from one of the real life accounts that I read. In the end I found a poem by Wilfred Owen, a First World War poet, and the title comes from that. The Passing Bells is the sound of the funeral bells tolling to mark the passing on of the deceased. That just seemed to fit and it became The Passing Bells. 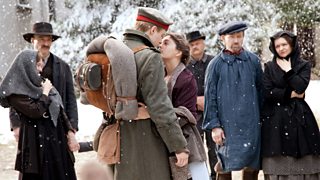 How did you find writing the series?

I spent hours and hours in my writing shed in my back garden sobbing like a child. What’s important to me, regardless of everything else, is that this is a story of two young boys and if you understand what I was trying to do then it makes it quite a special thing. It’s not about armies, or nations, causes of war, rights and wrongs of war, goodies or baddies. It’s just about boys.

Editor's Note: The Passing Bells is part of the BBC's season of programming marking the 100th anniversary of the First World War.  Find out more including the latest programmes, interactive iWonder guides, learning resources and free course, photo-galleries, news and events.

Watch The Passing Bells on BBC iPlayer and find out more

Watch an interview with Tony Jordan on our website

Read scripts by Tony Jordan in our online script library