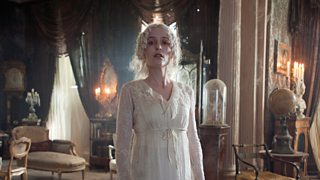 "We all have one. That inner voice that talks to us. Our constant companion, our own personal radio service. But the dial is stuck. The only station we can hear is ours.

One of the reasons why stories are so powerful is because they allow us to discover other worlds.

Writers spend their lives creating and exploring other psyches. I have always been fascinated by how they develop believable characters with unique ways of speaking and acting.

From Miss Havisham to Tony Soprano, I wondered whether these characters appear fully formed speaking inside writers’ heads or do they have to work at hearing the voices? Do they ever hear the voices as if they were talking outside their mind’s ear, with a will of their own; over and above the hand that’s writing the speech?

It was with great interest that I discovered the Writers Inner Voices project at Durham University via Twitter. The study focused on how novelists hear the voices of their characters. Dr. Jennifer Hodgson from the project contacted me to say she wondered how TV and radio writers’ experiences differed to those of novelists, which led the way to our podcast.

With a sample group of two, our research was only ever going to be highly subjective. Nevertheless, what quickly became clear was how real their characters were to writers Sarah Phelps and Al Smith

For Al, who has written for Eastenders, Holby City, teen drama The Cut as well as dramas for BBC Radio 4, writing provides the "sense of putting your head into the skull of someone else".

For Sarah, who has adapted Great Expectations, Oliver Twist, The Crimson Field and most recently The Casual Vacancy for BBC One, the feelings were similar. "I think about what the characters are doing even when we’re not looking at them."

From speaking to Sarah and Al, it was clear that people don’t just arrive in a scene. They exist when the camera isn’t on them. Furthermore, they are acting and speaking the way they are because of circumstances and events that happened long before the viewer meets them.

There are many ways into a story. Finding the right characters to give it a voice is vital to ensure your readers, listeners and viewers are hooked until the end."

Listen to and download the Podcast from the BBC Academy