Giri/Haji is BBC Two's new thriller set in Tokyo and London, exploring the butterfly effect of a single murder across two cities. A dark, witty and daring examination of morality and redemption. We spoke to the writer, Joe Barton about creating the drama.

Watch the trailer for Giri/Haji

We last spoke to you about Our World War which examined the experiences of British soldiers in World War One and looking at your career to date you’ve written comedy, drama, sci-fi and now a detective thriller. Do you have a favourite genre or one that feels more comfortable?

I’m not attracted to any one particular genre as much as I am to interesting characters and stories - whether they end up being in a rom-com or a horror movie is secondary, I think. I watch a wide variety of things so I’m always looking to try something different than what I’ve done before. Like when Kylie Minogue pivoted from pop music and did that really moody song about getting murdered with Nick Cave. You know? Like that.

You've described spending 3 years being rejected by every agent? What was the turning point and how did you keep your motivation and self-belief?

The turning point was finally getting one of them to meet me! My agent, Jago, is a lovely man and the only person I wrote to who ever let me in his office. It was a bit hard to keep motivated at times. I once had a rejection letter from an agent who corrected my grammar in the email I’d sent him. I also queued for 45 minutes in the snow one Christmas to pick up a missed package which turned out to be one of my scripts that was being returned to me unread. I think I kept at it because I really wanted to do this and also, and I can’t emphasise this enough, I’m sh*t at everything else.

How important was it to get your agent? Do you have any advice to offer about that?

Check your grammar. Also (once you have a couple of good scripts) find an agent who represents writers you like as they’re more likely to respond to your work. 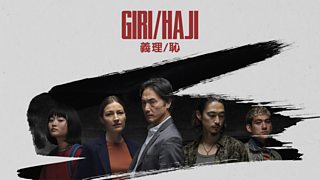 What brought you to the story of Giri/Haji?

About seven years ago my girlfriend had just started a crime science course. She was telling me about one of the other students on her course who was this middle aged detective who’d been sent over from Tokyo. He just sounded cool to be honest. I tried to imagine what must be going through his head being stuck in a room full of British people in their mid 20s. What did he think of everyone? Where was he staying? Did he know anyone here? Where was he going for dinner? Was he lonely? Did he miss his family? Was his brother who he previously thought dead actually alive and caught up in the suspected murder of a Yakuza boss’s nephew that had subsequently caused a gang war that was threatening to tear Tokyo apart? That last one was particularly helpful to be honest. 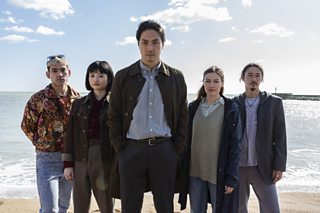 Is Giri/Haji the first time you’ve written a whole original authored series? What was different about that? How was the pitching and development process?

Yeah. It’s the first time I’ve done a whole show that was my idea. The pitching process was actually quite easy. Jane Featherstone, who is the exec producer, had just set up a new company (Sister Pictures). We’d worked together on HUMANS for Channel 4 so she invited me to come and talk about other things we could do together. I had a little page of ideas and I think one of them was just ‘Japanese detective. Comes to London. Maybe has to find his brother??’ Anyway she liked that one so we developed it into something a little more substantial. Channel 4 commissioned a script but didn’t go for it in the end, luckily the BBC and Netflix really liked it so we made it with them.

I think the difference with doing an authored series is that you get to stay involved over the whole process and people actually listen to you. I've done films and sometimes there if you try and make suggestions about the edit everyone looks at you, genuinely surprised and often quite put-out that you're a) still in the room and b) trying to give an opinion.

What research did you have to do on the specific world of organised crime and the Yakuza, the Albanian mafia and other groups? Did you speak to specialists in the field?

We had researchers who checked the scripts to make sure that we were getting all the elements of Japanese culture right and weren’t, you know, being incredibly offensively wrong about everything, but we didn’t do masses of specific Yakuza research. We did a bit of reading on their eccentricities - they get involved in legitimate business as well as crime. Some of them even have websites. Stuff like that. Research is really important but also sometimes you just have to make stuff up.

Watch a clip from episode 1 of Giri/Haji

You’ve talked about how Giri/Haji is also a tragic romance. What do you mean by that and how is this reflected in the story and characters?

The longer the show goes on the less it becomes about crime and cops and gangsters and the more it becomes about all of these messed up people who’ve found themselves in this unlikely situation. It sort of centres on these two weird quasi-families that find themselves thrown together in London and Tokyo. At the centre of that are Kenzo and Sarah (Takehiro Hira and Kelly Macdonald) who are these two broken, lonely, people. So there is a romantic element but it’s also very tragic, probably because my love life was a bit of a mess when I was writing it and if I can’t be happy I don’t see why my fictional characters should be either…

Giri/Haji goes out on BBC Two in the UK and Netflix internationally. Did you find it creatively freeing to know it would have an international reach? Do you think audiences today are more familiar with and accepting of multi lingual drama and subtitles?

Yeah it’s always nice to know that it’s going to have a chance to be seen by an international audience. I think audiences are more accepting of subtitles these days. There are shows like Narcos and Money Heist and I just don’t know if it has the sort of ‘art house stigma’ it used to have. Or maybe it does and no one will watch this. Well we’ll find out anyway.

What’s the significance of The Legend of Giri/Haji poem?

The marketing department asked me to write it. No, I’m joking, it’s very deep. I don’t know. I think a big challenge with this has been that there aren’t too many other shows we can point at and be like ‘if you liked that you might like this!’ Except that one episode of Hamish Macbeth where he goes to Kyoto. Anyway, its uniqueness is what drew us all to it but also we want to get across kind of what it’s about so people watch it. If we could just say “it’s Peaky Blinders meets Lost in Translation” or something, that’d be easier. Actually that’s not bad, we should have done that. 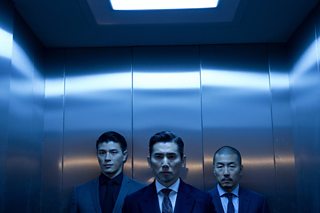 From your experience what would be your top tips to other budding screenwriters? What do you know now that you wish you could share with your younger self?

Just write loads. I think it’s the only way to get better. Everyone always says you should read lots of scripts but personally I’d rather read almost anything than a screenplay, they’re a f***ing nightmare. But I think reading good writing, in whatever form, makes you a better writer. You can learn more about language from reading Barney Ronay writing about football in the Guardian than probably 90% of the TV scripts out there (including mine). But, I mean, do what you want really. I would say learn the very basic outline of what a three act structure is but don’t spend loads of money on screenwriting books or any of that sh*t. Screenwriting courses that cost lots of money should be avoided too, I think. Again, unless you fancy it.

The one thing I do think has been the biggest revelation to me is to write the stories that you’re interested in, rather than trying to work out what might be more likely to get made. Just working on something you love improves your writing more than any of those articles with titles like ‘Learn these 5 screenwriting secrets!’ ever could.

What’s coming up for you next?

I’m going to have a small existential crisis when the show comes out and then I’ll see what the next thing will be. Got some films and TV shows that I’m developing but I'm waiting to see if anyone will give me billions and billions of dollars to make them.