Borgen: Outside the Castle

When Borgen was first broadcast on television in Denmark, a radio series was commissioned to complement it. Borgen: Outside the Castle is set in the civil service during the time Birgitte Nyborg comes to power. Glimpses of her ascent are heard in the radio drama, but BOtC has its own hero and its own story. Hans Gammelgaard, private secretary in the Ministry of the Environment, unearths a conspiracy around GM food and he risks his life and his loved ones, trying to bring the dark dealings of government and big business to light. 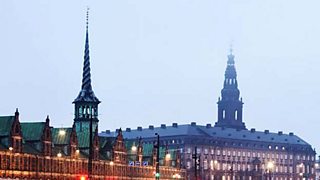 I got the call about adapting BOtC late in July, needing a superfast turnaround by September, so it could be recorded for broadcast along with the BBC4 series. It was a daunting prospect, but, like any writer, I was seduced by the chance to work on anything to do with Borgen.

But this isn’t intended to be one of those blogs. I hang around on here regularly, procrastinating as ever, and take on board the comments about us blogging writers just thanking their lucky stars for the chance to etc etc. Hopefully this will be of some practical help, because doing the adaptation was a help to me in learning how to do better with my original stuff. And that’s all we can ever hope to do, isn’t it? Of course we all want agents, commissions, awards and all that. But really, all that is realistically in our power, all that really matters, is to get better.

So… the Danish radio series was 10 x 30 minute episodes. The Radio 4 version needed to be 5 x 45 minute episodes. Tricky, but not that taxing you’d guess. Stick two episodes together, trim it down a bit. Bingo! Kind of…

Except that Danish is really wordy. If I stuck two of the literally translated episodes together, I ended up with some 14,000 words. For a R4 episode, I needed little more than half of that. Some of the wordiness was a no-brainer to cut, but to really get it down to size, I needed to be ruthless. And I didn’t want to be. I loved it. It was everything I loved: a cracking conspiracy thriller with a flawed hero, a constantly twisting plot, something important to say, but a sense of humour to puncture any pomposity. When the excess Danish verbiage (and swearing – their radio is awash with f-words!) was cut, every line had a purpose. Every line was precious. And it was still way too long.

But it wasn’t mine. However much I loved it, it wasn’t the blind love that can come with originating something. I went back to that first time I sat down with the huge pile of literal translations. When did the love kick in for me? What was I really interested in? What was it really about? I’ve told you in the intro. That’s the story. The character. That’s what I had to keep hold of and follow through each draft, cutting back everything that didn’t take Hans forward in his journey, focusing only on what had compelled me, as a reader, to turn the pages. I still loved it, but I could see more clearly, what had to stay and what could go. If only I could see so clearly with my own scripts. 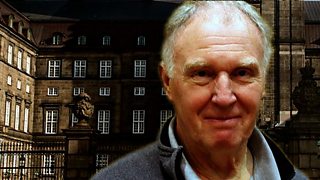 Tim Pigott-Smith plays Hans Gammelgaard in Borgen: Outside the Castle.

We hate it, don’t we? When we have to tell people exactly what our work’s about. That’s why we stress so much about pitching. Why we seethe at the reductionism of 25-words-or-less logline exercises, foisted on us by execs who don’t get it. But the truth is, as readers/listeners/viewers, that is what we are seeking, what we hold on to, why we stay tuned. If we lose the thread, we are lost.

But while we’re writing, it’s different. Unless we are doing an adaptation, however many beatsheets we do, we don’t really have a map. We are weaving the thread of our story as we go and we get ourselves tangled, a lot! We can’t always say exactly what it’s about because we don’t want to know exactly, we’re hoping to surprise ourselves.  It’s about lots of things. While we’re writing, we have to stay open to all that potential.

But what adapting BOtC taught me, is that when that stage is over, to get to the next stage, we have to be ruthless. We have to get the perspective to understand what our script is about and then cut and craft it around that, with the ferocity that I focused on Hans Gammelgaard and his conspiracy. How do we get that perspective, without getting someone else to ‘adapt’ it? Do we pay a script reading service for some notes that might be cobblers? Do we put it in the drawer for six months and risk going off the whole idea? Do we send it into Writersroom and pray they’ll see the potential and then tell us what it's about?

I’ve tried all of those ways in my time, and many others. I’m still trying. Getting different people to read my scripts (for free now, but usually less quickly), always hoping someone will nail it for me. It’s almost never that simple. They’ll all give me something, but it’s down to me to piece it together. But keep trying, because sometimes, when it happens, it’s worth all the searching.

Last week I met a director who had read one of my scripts. He sat there and told me what it was all about – the story, the themes, the kind of films it was like. He thought I knew and that he was just showing me that he understood. Obviously I had some idea (or too many ideas!), but what he did was a revelation to me. It was what I did with BOtC. He gave me the thread. The whole ball of it, untangled. Now that I know, I can go back and be ruthless with my redraft. Wish me luck.

In the meantime, I hope you enjoy joining Hans on his adventure as much as I did.  And good luck with your own adventures too. Be brave.

- Visit the Radio 4 programme page for more information about the series and the characters.

What is the point of feedback – and how should writers deal with it?