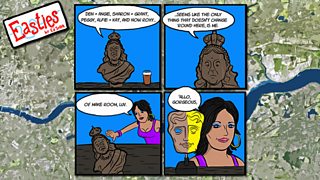 Grandpa?" they'll say as they climb up onto my hover-chair "What's a Storyliner?" I'll smile, and ruffle their hair, and point to this article, which I'll have framed above the holo-fire. Because I don't actually want to talk to my robot grandchildren of the future. They are awful.

I ended up a Storyliner because I wanted to be a Script Writer. For a while, I only knew the latter existed. Writers had their names in big letters on the telly and sometimes accepted BAFTAs and other shinies. So I knew about them, and could even name a few of them, but I didn't really give much thought to the massive network of production and editorial talent beavering away in biege-walled, dimly-lit dens. The end credits was just for a longer-version of the theme-tune, right?

But then, one summer, it all changed. And I knew nothing would ever be the same again…

Unlike Kevin from the Wonder Years, I hadn't spent my evenings riding my bike until the sun set, pining after Winnie (well, not much). I'd been bent over a keyboard trying to get the knot out of my stomach and write something I was happy with. I'd been sending work out, knowing it was a long-shot, but hoping that maybe someone would see it and like it and take a chance on it. And eventually they did. Sort of.

What I was told was that it was rare for a show to take on such a novice and untested writer such as myself, but there were other ways to get experience - a great starting off point was in the Story Office of a continuing drama. After a bit of networking, I ended up dropping everything, giving my boss four day's notice, and moving to Liverpool to join one of these Story Offices. And I'll admit, I was sceptical. What I liked about writing was dialogue. I liked character and their voices and the jokes and working of it. Storylining was the stripped-down, bare-bones essential. No room for wordy-flourishes, for jokes, for banter. It would be factory-line, doing-as-I'm-told, all narrative and nothing else (and as you'll probably realise reading this blog, I love to waffle on). I went into the job looking at it as a necessary evil - the first rung on the ladder.

Quite quickly I came to realise Storylining is brilliant.

Had I somehow, by some miracle, gone straight into script-writing, I would have come unstuck. I would have cocked it right up. What I learned as a Storyliner has proved so invaluable to me as a writer, I…I…I just don't know where I'd be without it. I'm so in debt to the process, I name my firstborn TeamStory. She hates me for it (which is why my robot grandchildren of the future turn out so awful. Cause-and-effect, see?).  Learning and mastering story is by far and away the most important part of writing. It's more important than knowing what a semi-colon does. It's more important than putting two spaces after a full-stop.  It's more important than eating cake - which is a massive part of working in TV, I've found. They give you cake all the time. I wish they'd stop.

Starting out as a Storyliner, I felt a bit like a detective. I'd stand, with my red bush tea in hand, maybe some biscuits or a bit of toast, and look up at a notice-board, all scraps of story, clues and details. Then I'd try and work backwards or forwards from what we did know (someone gets shot at a wedding, a B&B explodes, there's a lawnmower race) until I'd solved the whole thing. Until I'd worked out all the threads and paths that got us where we needed to be.

Actually, it was better than that. It wasn't just me looking at that board, it was a team of us. Storylining is often a collaborative effort and all the better for it. We'd bat ideas against each other and be mindful of each other's strands; weaving inciting incidents and obstacles together out of all the stories we were working on, so that (hopefully) we'd end up with a complete and watertight episode. One of the pitfalls of multi-strand storytelling is that events can feel like they are occurring in a bubble, which is often the result of writers/Storyliners working in a bubble themselves. Sitting in a room with other talented creatives, unafraid to say 'what if' or 'how about' meant we'd end up with strong, cohesive episodes. Of course, not every show goes for such a team-based system. Some prefer a more writer-led process, but even on them, interaction between editors and producers and the script team is key to ironing out concepts until you have the very best storyline you can get from it.

The other advantage to being in a team is moral support. On a continuing drama, you could be writing five stories an episode, for four episodes a week. So that's eighty stories per month, which could go through three drafts - so now we are looking at, what, 240 stories before a writer gets a commission? It's an arduous, time-consuming job, which asks a lot of you. You will sacrifice a lot of time and a bit of sanity to a Story Department (and put on a load of weight. They call it the 'soap-stone' - it's all that damn cake). But, despite being locked in a room with them for sometimes twenty hours a day, I am still really good friends with the team I started out with, five years later. We only killed one of us, and that was because we wanted to eat something other than cake. We still really liked the guy. We were just fed up of cake.

But aside from all that chumminess, Storylining taught me a discipline. Through my own editorial process, and the notes from my colleagues on up, I got smarter and tighter and more ruthless at finding the pure 'What's the Story?' answers. The limits placed on the Storylines we wrote (word-counts, no suggested dialogue, minimal details) helped build the mental muscles I needed to become a writer. You throw out all the dressing, all the decoration, all the fat and interrogate exactly what the story is and needs to be. As I've understood it, a Storyline document needs to tell a writer what happens, and why. And the writer's job is to find out how best to show that (And put in all the jokes about Pepsi and Shirley). Bad story-lines are just collections of events; a list of continuity points that the writer needs to include. Good storylines (by-and-large) are arcs - however small - journeys where an identifiable protagonist learns something through either failure or triumph. Even if the writer wants to disregard the shape of the journey we've set out for them (HOW DARE THEY?), the document has still given them idea enough of what we want in terms of character and tone - so that it is a starting point, rather than something to be discarded.

There a dozens, hundreds, thousands, millions of other facets to being a Storyliner. What I've rambled on about up there is largely the 'perfect-world' method, when the truth is there is no hard-and-fast rule to being a Storyliner.  You are what your producers need you to be. So if you are setting out on this career path, be prepared to adapt, to endure, and to develop a thick skin.

After nearly five years as a story liner for different shows, producers and processes, I'm just starting out as a writer. Instead of being asked to create the story doc, I'm being handed it and asked to write a script instead. It's thrilling and nerve-wracking in equal measure. I wouldn't have got here if I hadn't cut my teeth in a story office, and I have total respect for the document I'm working from, because I have some idea what it's gone through to get here. Storylining did turn out to be a rung on the ladder, in a sense, but not in any cynical way. Much like the storyline document is foundation to a good script, the storyline process is foundation to becoming a good writer.

Ugh. That last sentence was awful, wasn't it? Really corny. I should wrap up now. I'm done.

I could harp on, but there are some things you need to find out for yourself. I could tell you all about Jazzpants Friday, Grumpypants Monday, The Tandoori Threshold, 'How Over is Over?' and many more, but these are my in-jokes and you'll just need to work on your own, yeah? Being a Storyliner is a blast. A learning process and a shared history. It's the time of your life. It's the summer of '69. It's the Wonder Years…"What would you do, if I sang out of tune? Would you stand up and walk out on me. Lend me your ears and I'll sing you a song. I will try not to sing out of key…"

I get by with a little help from my friends. And a lot of cake.

When he isn't comparing himself to Kevin from The Wonder Years, Ed is trying his best to be a writer. He put in long hours in the Story Offices of Hollyoaks and EastEnders and is now hard at work on his first script for Doctors, as well as doing bits and bobs of development work here and there. He was part of the Writersroom Future Fiction and CBBC Interactive development scheme and selected to be part of ‘Skylight’ at the TV drama Writers Festival 2013. He eats a lot of cake, reads a lot of comics, grows a lot of beard.  He was expelled from nursery school and appeared on two episodes of Singled Out.

Exploring the culture of blame: Hangdog

The Show What You Wrote: What I've learned