Creating and writing 'Ordinary Lies' for BBC One 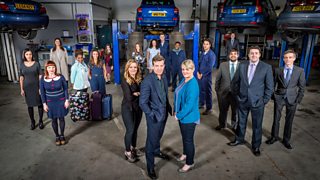 Editor's Note: At the end of the final episode of Ordinary Lies on BBC One at 10pm on Tuesday 21 April 2015 we ran a live Twitter Q&A with writer Danny Brocklehurst.

How did you develop the idea for Ordinary Lies?

The idea of writing a series about the secret lives of people who work together had been something I had been thinking about for some time. I love writing about secrets, lies, duplicity, but I also love writing about ordinary people, so I married the two ideas together. You only have to pick up a copy of a local newspaper to see that every single day people are doing things they shouldn’t – some big, some small. I wanted to create a drama series that allowed us to tell some of these stories.

Did you have any key inspirations for any of the stories?

They are all modern morality tales. Every single episode, without being preachy, is a story about an aspect of modern life – whether it be debt, grief, internet sex or young girls wanting a quick route to cash and designer clothes. I wanted to write a series that was really contemporary.

What challenges did you face whilst writing the series?

The challenge for me is always making sure the stories are good enough. One episode I completely scrapped and wrote again from page one. I wanted every episode to be a powerful, funny, engaging watch. And if it isn’t on the page – it won’t be on the screen. 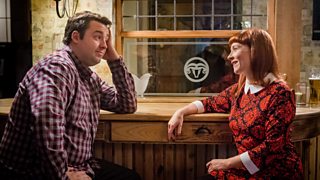 Why did you choose to set the series in a car showroom in Warrington?

Well, the show could have been set in almost any workplace in almost any part of the country, that’s the point. I almost set it in a nondescript office like so many of us work in, but when we discussed it further we felt that the workplace should have a personality. And a car showroom has a brilliant range of characters and a natural hierarchy. But this isn’t a show about selling cars, it’s a show about people – and we wanted a workplace that offered us the opportunity to meet interesting characters.

How did you research the particular areas you delve into in the series?

The research was done hand in hand with the story lining. I always decide which story I want to tell then research it to make sure I am offering a credible drama. The missing person story is about as true to real life as you can get – I looked into it long and hard and wrote accordingly.

How does Ordinary Lies compare to previous series you’ve written?

If you look at my previous work, like The Driver, Exile, Talk to Me, they are all about hidden lives and this series continues that trend. The more obvious comparisons are Clocking Off, Sorted and The Street, in that they were big bold stories about ordinary people. However, Ordinary Lies has a distinct angle, it’s a show about how no-one really knows one another: work colleagues, friends, even lovers – there are always some secrets, always some lies… 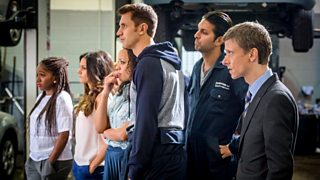 Ordinary Lies is about everyday people that we can all relate to. Why do you think that’s so important in a TV series?

For me, there is too much murder on television. I get it, people like crime, but I wanted this show to find its drama in life. I wanted to write a show that was about the very human way we all make mistakes, the way we all spin too many plates, choose the wrong path, even try to do the right thing, but it somehow goes wrong… I also wanted it to be a funny, warm show. There is a lot of love in this drama, and I hope viewers will respond to that.

The series has a fantastic cast – did you have actors in mind when writing, or did the casting come later?

I never really write with actors in mind. But as we started to assemble our cast I did some rewriting to suit the actors. I have worked with Max Beesley before so when he became Mike Hill, I rewrote slightly to suit his style and the same with Sally Lindsay. It’s a great cast. I’m thrilled to have them.

Find out more about Ordinary Lies and watch on BBC iPlayer

Read a blog by Mackenzie Crook on his comedy 'Detectorists'

(This interview was originally published on the BBC Media Centre)

The US Perspective - 3. From The Onion via 30 Rock to The Mindy Project

Reopening the doors Inside No. 9