Hello. Apologies for missing a week - I was off in Bristol doing some acting and then I lost the email with my login details. Also, I'm only half way through series one of Mad Men so something had to give. Anyway, to make up for my absence, I promise my next blog will contain at least 75% more bullish opinion.

This one, though, I'm going to turn over to wiser heads. When I started this blog I asked a few writers I knew who'd been through the topical sketch mill for any advice they'd give if they were in my position. Well now, through the magic of cut-and-paste and formatting they are.

We start with Laurence Howarth. One half of Radio 4's Laurence & Gus (but I'm not saying which half), Laurence has written for, among others, Armstrong & Miller, Dead Ringers, Omid Djalili, Mitchell & Webb, Look Away Now as well as his own sitcoms Rigor Mortis and Safety Catch and the granddaddy of all topical radio shows Weekending.

Be careful of writing in the subjunctive. Not in the sense of using the subjunctive (it's a perfectly good mood) but in the sense of writing something that might work, that could be funny, that may fly if it gets a good rewrite or is really well performed etc. If you're struggling to think of a really good idea, it's tempting to alight on a mediocre one and work on that in the hope that it may eventually, somehow turn into something really good. Such ideas rarely do. Better to wait for the really good idea and then write in the indicative, i.e. a sketch that does work, is funny and will fly. Easier said than done, mind.

If this was an Alan Yentob documentary I'd fly to New York for the next interview. As it is, I just sent a friend an email. Danny Robins, as well as being a comedian, presenter and art panel pundit, is my long term comedy partner. We've done loads. You can trust him.

Beginnings and ends are the hardest. Go for unpredictability if you can and have a killer punchline - don't let it fizzle out, even if the beginning and middle are good, sketches with bad ends always get cut.

Keep it lean and mean. Look at every line and see if it justifies it's place in there comedically. A short and very funny sketch is better than a longer quite funny sketch.

Arial 12 point. It's the professional sketch-writer's font of choice. Times New Roman is for people who don't know how to work their computer properly and Comic San Serif is for the dangerously mad.

See, Arial 12pt. I said you could trust him. Since I asked Simon Blackwell (The Thick of It, The Old Guys, Peep Show) his opinion, he's been nominated for an Oscar, so hark unto this:

Always rewrite when you're asked to, and, unless you have a huge objection, in the way you're asked to. Most of what's in your first draft won't get broadcast, and that's a good thing.

Finally, Gareth Gwynn is one of the Radio Entertainment department's staff writers and has helped read / rewrite for every episode of Newsjack - as well as working on The News Quiz, The Now Show and I Guess That's Why They Call It The News. He's chosen to express the Newsjack submissions he read in the form of a graph. 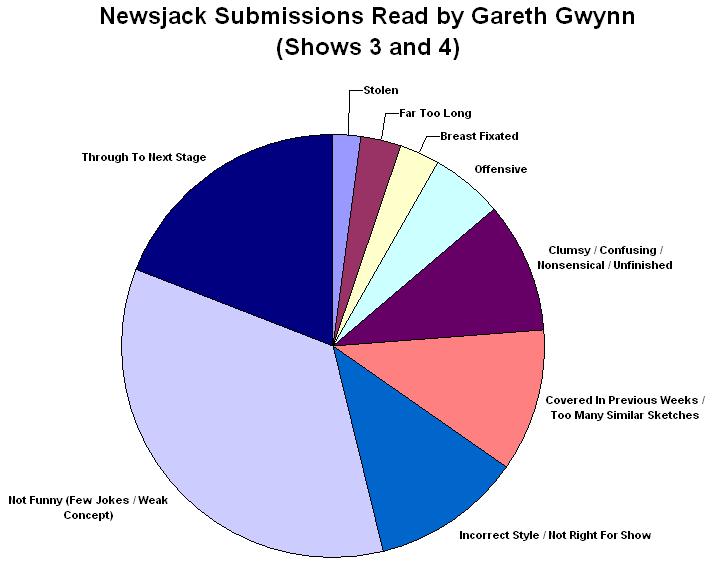 Yeah, graphs in a blog. I'm like Ben Goldacre.

Next time: Why Sketch Writing Is Like Jazz. No, come back, where are you going? It is. It is like jazz.

You can stay up to date with Writersroom Blog via these feeds.