This page has been archived and is no longer updated. Find out more about page archiving.
World service homepage
World Service Writer in Residence homepage
« Previous | Main | Next »

A Man was Going Down the Road

Looking back at the festive season I realised that the best present I received was a book.

That book was written by my late friend, the great Georgian writer Otar Chiladze, and is called A Man was Going Down the Road. It is translated by Donald Rayfield - the ultimate connoisseur of Georgian and Russian literature.

This novel is the earliest by Otar Chiladze, written in 1972. I read it years and years ago when it was initially translated into Russian. 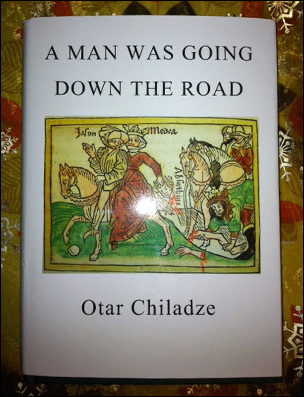 As the blurb to the English translation says:

"...this novel is the key to his later work. It begins with the Greek legend of Jason and the golden fleece and the consequences for the obscure kingdom of Colchis after the Greek Jason comes and abducts Medea. But it is also an allegory of the treachery and destruction that ensued when Russia, and then the Soviets, annexed Georgia, as well as Chiladze's interpretation of life as a version of the ancient Anatolian story of Gilgamesh, and a study of Georgian life, domestic and political, in which women and children pay the price for the hero's quests, obsessions and doubts."

I still remember my utter joy when reading this book - as if my mouth was full of Georgian grapes and the taste of the famous Georgian wine, be it Kindzmarauli or Akhasheni, sending my head into a spin...

I had the same sensation - maybe even stronger - while reading the English translation of the book. But this time my dizziness came from the autumnal clarity of the language, from the transparency of the prose flow, from the typographic quality of the book. It is as if the Georgian wine of Otar Chiladze's novel has been matured even further in English barrels. Here's an excerpt from it.

"After the rain the world was shining, laughing in its primordial beauty, showing neither tiredness nor age, ready to begin everything again, to give birth, to create, to kill and destroy. Perhaps it was now, in this one minute, in the conjunction of muddy earth and baking sun, that so many different sorts of seeds sprouted, so many shoots, worms and insects broke through fibres, cocoons and eggs to emerge in the sunlight, where each had room to spread their limbs, to swim, to turn, because just as many were leaving the sunlight, dying, being washed up, rotting, and taking their place in the cycle of death and life, but in a new form, changed by the eternal transformation, coming back to earth after a myriad of years, transfigured when their turn came. But after a myriad of years their duty would be the same: to live and die, to die and live, and so on without end... Each creature must leave behind its likeness, and until it has created that likeness, it may not die, because death counts as rest for it. So on passing over into death, it can wait with its arms folded to be supplied with new vestments and new mask and to be called: 'Arise, your time has come!'"

When I studied biology at university in my youth one of our professors loved to repeat the formula: 'Every phenotype repeats its genotype', which in its simplicity means that species, especially in their embryonic development, go through the evolutionary stages of their biologic race. Sometimes I think that we live through the same process psychologically, i.e. repeating in our biographies to some extent the entire world history: the joyful Greek childhood, the Roman adolescence, the sombre Middle ages, the unexpected Renaissance, the wise Enlightenment, etc...

The last time I met Otar Chiladze it was in the centre of Tbilisi in 2006 at the flat of another great Georgian writer, his brother Tamaz. Otar told me then that he had written a new novel Godori - The Basket - which I promised to read, but never did. Otar Chiladze died in 2009 and ever since I have lived with the guilt of that unfulfilled promise.

Finally, I read it in parallel with the translation of his first novel.

Unlike A Man was Doing Down the Road, it's a bitter novel. In a nutshell it's about the intermarriage of Georgian NKVD killers and intellectuals. At the same time the novel's content is much wider - a discussion taking in the place of Georgia in history, its relationship with Russia ("it was digested by Russia 200 years ago to come out through its rectum"), Georgia's current situation in the world and its future... Like Gabriel Garcia Marquez's One Hundred Years of Solitude, which tells the story of the Buendia family, Chiladze tells the story of the Kashelia family over the last 100 years, in which a son kills his father after he suspects him of sleeping with his wife.

The novel is written as series of streams of consciousness from different characters, but at the same time could be read as a series of confessionals. It gives a multidimensional view of modern Georgia with all its problems, labyrinths and cul-de-sacs.

"We beat our breasts - we are born warriors! Well, every nitty Georgian has a price on the black market - as a detergent, a condom or black pepper ... Add to that total theft, encouraged by the authorities and raised to the rank of the state policy ... " - one of the characters thinks.

Another one repeats: "Georgia has already outlived one life ... The world has changed and has been reshaped a thousand times, just to give us a chance to come once again into the world from the womb of the empire through her rectum; no one in this world will give us the room ... They would rather splash gasoline onto the linen, and set fire as to the bed of the plague ... ".

It's a bitter and honest novel which is relevant to all post-Soviet states searching for a new identity. I hope that one day Donald Rayfield, having brought to English readers Otar Chiladze's first book, will translate his last one too.

BBC World Service writer in residence Hamid Ismailov will be writing creatively about events in the news and issues that have grabbed the world’s attention.

Writer in residence Hamid Ismailov is an Uzbek novelist and poet. His work is banned in Uzbekistan and under threat of arrest he moved to London and joined BBC World Service as a journalist. He is now head of the Central Asian service. Read more

You can stay up to date with World Service Writer in Residence via these feeds.