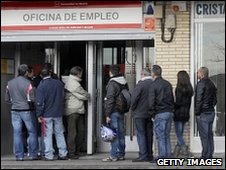 "Don't worry, speak to anyone in Malaga and they'll know someone who is young and unemployed." Javier, a businessman in the city, tries to reassure us as we're franticly making calls from the airport lounge in London.

Sarah Holmes and I are on a last minute trip to Spain. Despite having the 4th biggest economy in the eurozone, the country has the worst unemployment in the industrialised world and recent figures show that almost a quarter of the population are out of work. For those aged between 16 and 25 that figure increases to over half. Even in the context of the Eurozone crisis the stats are shocking and have already got many of you talking.

On Wednesday we'll be broadcasting from Malaga in the south of the country. With a growing young population the situation there is particularly bad and the stats are even more startling; in the region of Anduluca alone almost six hundred thousand young people are looking for work. We'll be talking to job seekers about their attempts to find work and what can be done to get Spain working again.

Back in the airport Javier ends the call with a promise to find us some interesting English speaking guests and we board our plane. What do you make of the situation in Spain? Do you believe the stats? What more can be done to help get people back into work?