Tony Blair, your reaction to his evidence 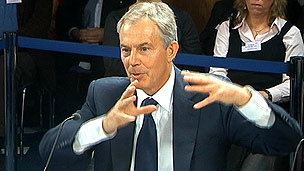 This topic was discussed on World Have Your Say on 20th January 2011. Listen to the programme.

A year ago he was hauled before the Chilcot inquiry in London to answer questions about decisions made in the run up to the war in Iraq in 2003. Today former British Prime Minister Tony Blair has been there again to fill in some “gaps in his evidence”

So far today we have learnt that Tony Blair privately assured US President George Bush “you can count on us” in the run-up to the Iraq war. And that he disregarded a warning from his legal adviser Lord Goldsmith that attacking Iraq would be illegal without further UN backing because it was “provisional”. It’s also been revealed that a year before the U.S.-led invasion of Iraq, Tony Blair told his chief of staff the West should be “gung-ho” on toppling Saddam Hussein.

And finally he concluded his evidence by saying he ‘deeply and profoundly regrets’ the loss of life in Iraq. His words were met with cries of “too late” from the public gallery.

“Blair says he has no regrets sending troops to Iraq but does regret loss of life there. What did he think the troops were going to do?”

Here are the key points to come out of today’s evidence.

So after four hours of cross examination, do you feel Tony Blair has now answered his critics? What more would you have wanted to hear? And if the inquiry decides Tony Blair is to blame for some of the mistakes made - what then?