Who's to blame for Islamaphobia? 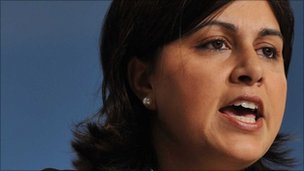 Baroness Warsi is seen as a fast rising political star in the UK, she’s the chairman of the Conservative party, which is part of the ruling coalition, and the first Muslim woman to be a Cabinet minister. Yesterday she said Islamophobia is not just rife in Britain but it’s also the last socially acceptable form of bigotry.

For far too many people, Islamophobia is seen as a legitimate, even commendable, thing. You could even say that Islamophobia has now passed the dinner-table test. So when people get on the Tube and see a bearded Muslim, they think 'terrorist'; when they hear 'Halal', they think 'That sounds like contaminated food'; and when they walk past a woman wearing a veil, they think automatically 'That woman's oppressed'. And what's particularly worrying is that this can lead down the slippery slope to violence.

Baroness Warsi argues that prejudice has “crossed the threshold of middle-class respectability” and become so acceptable its now possible talk about it over the dinner table. Adding that labelling Muslims as either “moderate” or “extremist” fosters a growing intolerance. You can watch an interview with the Minister here.

If you’re in the UK do you think she is right? For those of you outside the UK does Baroness Warsi’s comments ring true for you? Are you worried about it? Or do you feel its legitimate to have concerns about the Muslim community?

This has obviously sparked much debate in the UK and I just wanted to give you a flavour of some of the emails that have been sent to the BBC from the Muslim community.

I've been born and raised in the UK. Before 9/11 it wasn't much of an issue being Muslim but afterwards, the Pakistani jokes changed to Muslim jokes, even with my non-Muslim friends.

I tend to find the media doesn't help, including the BBC. A case of domestic violence involving Muslims will automatically get a headline saying 'A Muslim man beat up his wife', which immediately gives a negative image of Muslims.

Why is Baroness Warsi raising the subject of Islam as a talking point? To me it seems pretty farcical, almost counter-productive. All she is doing is bringing the whole Islam-Islamaphobia issue to the fore.

There are prejudices, but there are other prejudices occurring in different parts of the world that are far more important than this.

I've lived in the UK for 37 years and I don't know of anyone else living near me who is also from Afghanistan so I understand why some Muslims stay together. People need the comforts of a shared language and culture. There are lots of frightening, daunting and intimidating circumstances where people need to be near someone else who understands their fears.

Is casual racism towards Muslims becoming acceptable behind closed doors? Is it the result of some Muslims being seen as a threat after the attacks on 9/11, the London and madrid bombings? Or, as WHYS listener Kevin in North Carolina believes, is it a reaction to Muslims portraying themselves as victims?

Why are all the Muslims so much more testy about their faith and assassinate people who are only exercising their freedom of speech rights when it comes to a joke? ....If Muslims stopped using religion as a propaganda tool and weapon, took better care to fully educate ALL of their children, including women, and took legitimate measures to eliminate corruption in their political systems, and less of an interest in "revenge" killings, maybe we'd all be better off.