On air: Should the Commonwealth Games be cancelled? 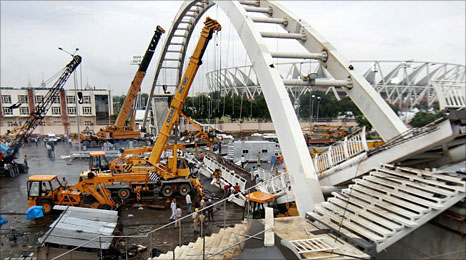 Collapsing bridges. Star names withdrawing. And an athletes village with dogs in the duvets, rubble in the bedrooms and excrement where it shouldn't be.

The Commonwealth Games in Delhi are currently suffering worse pre-event publicity than a Max Bialystock musical.

Events are moving fast. Mark Tweeted last night (UK time) that we would be thinking of discussing this on WHYS today; since then, three English athletes have withdrawn, the Scottish team has delayed its departure, and the head of the Commonwealth Games has set off for Delhi for talks with Indian officials.
Literally as I clicked "publish" on this blog entry, news came through that a ceiling had collapsed at the weight-lifting arena. Who knows what else will have happened by the time we go on air?

As the BBC's Nick Bryant points out, all major events like this are dogged with problems in the build-up, only for things to be fine once the sport begins - but "there is something qualitatively different in Delhi, because the knocking stories ring so very true

Perhaps things will come good, as they so often do in India, at the last-minute and in the nick of time.

And certainly, when I was working on World Cup Have Your Say earlier this year, I remember a number of fears raised right until kick-off - not least of rampaging crime, and even terrorism in the wake of events in Angola - which turned out to be completely unfounded.

Ultimately, it turned out the tournament was let down by the footballers, not the organisers. Is it possible that this is the case again - that the athletes' fussing is casting an unnecessary shadow on a country

India is a country that, cricket aside, punches well below its weight in sporting terms. If South Africa could be given a chance to transform its image via sport, surely the same leeway should be applied to India?

Back in January, Mike Fennell, the president of the Commonwealth Games Federation, blamed concerns about Delhi's preparations on "Western snobs."

And he went on to insist that:

"This is a world-class village, probably one of the best ever. I have been to many Games over the years and therewas never a village of such high quality."

So is this all fuss over nothing? Are the athletes pulling out letting India down? Or is the situation in Delhi a national disgrace? Should the Commonwealth Games be cancelled?