On air: Should a mosque be built near Ground Zero? 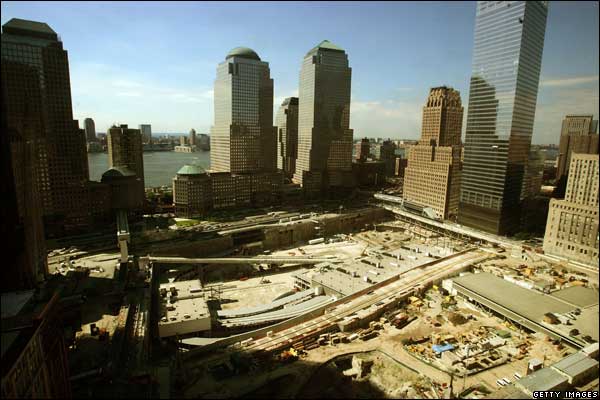 UPDATE: 4 AUGUST: In a unanimous vote the last obstacle to building a muslim community centre and mosque at the site of 9/11 has been removed. The project's planners say:

We are eager to begin working with our partners, supporters, neighbors and communities, to build a community center for everyone.

UPDATE: 3 AUGUST The debate over the plan to build a mosque two blocks from Ground Zero rages on. This column by Abe Foxman, head of the Anti-Defamation League an organisation which fights anti-Semitism and all forms of bigotry, garnered a huge reaction as he lays out reasons for their opposition to the mosque. And a great round-up of conflicting opinion here courtesy of the Wall Street Journal.

Reading through the arguments, who do you agree with? Please post below.

UPDATE 10 JUNE: Opponents feel it's their moral duty to protest against what they call the 'mega mosque'. That's exactly what they did earlier this week when they hit the streets of Manhattan.The project founder continues to insist the aim of the Islamic Centre is to "bridge and heal the divide between Muslims and other Americans."

This blogger calls the whole idea an abomination but isn't impressed with the protestors behaviour. This piece adds that the debate is becoming irrational - there's zero tolerance on ground zero.

UPDATE: This story continues to gather steam online particularly on Twitter. It's even got it's own hashtag #groundzero

' A mosque at Ground Zero celebrates jihadists not 9/11 victims & does nothing to improve Muslim-US relations.'

'They should be able to put the mosque wherever they want Islam, as a religion, ought not be held responsible for 9/11'

Last night a plan to build a mosque near ground zero cleared one more hurdle.

The community board representing lower Manhattan voted 29-1 in favour of the plan with 10 voters abstaining. It was unruly meeting with project opponents jeering and yelling at speakers with comments such as 'You're building over a Christian cemetery' and 'Show respect for 3000'.

Although the votes were not necessary for the building to go forward they do function as an endorsement of the controversial project.

Rosemary Cain, whose son, a fireman, died in the attacks is one of the people who is not happy about it. She said "I think it's despicable. That's sacred ground. It's a slap in the face. How could anybody give them permission to build a mosque there?"

Tea party activist Mark Williams has said the proposed centre would be a monument to the 9/11 attackers.

The mosque's development is being led by the Cordoba Initiative which, according to founder Imam Feisal Abdul Rauf is about "moderate American Muslims who are the vast majority of the Muslims in the world and who condemn terrorism and 9/11". He wrote this article to explain why he supports it.

"It is almost as if they are giving these radicals a place that they can come to look at what they did," said Al. "There are plenty of places in New York City where you can build a mosque. To have it two blocks from the world trade center seems very inappropriate and just callous," says Maureen.

The mosque still needs to get approval from the Landmarks Commission before it can move ahead with the plans. New York City Mayor Michael Bloomberg supports it "Anybody wants to build a house of worship in this city, we'd love to do it,"

Do you think ground zero is an appropriate place for a mosque? Do you agree with Al and Maureen or with Iman Feisal Abdul Rauf ?