On air: Is it ever OK to boo your own team? 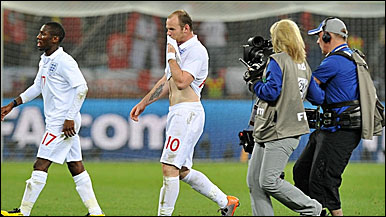 This topic was discussed on World Cup Have Your Say on 19 June 2010. Listen to the programme.

As he left the pitch following England's disappointing 0-0 draw against Algeria, Wayne Rooney turned to the television cameras and, his voice dripping sarcasm like honey dripping from a knife, said: "it's nice to see your own fans booing you."

The comments have instantly made "Wayne Rooney" a trending topic on Twitter - and most of them are, it has to be said, rather negative.

Here's himoffwireless, with a slightly edited reference to a famous advertising campaign:

And it's that reference to the costs that have riled so many people. A caller to the BBC's domestic news and sports and station, 5live, phoned their England discussion show after the game pointing out that his brother had taken out a £5,000 loan and taken a large amount of time off work to go and see the game.

Having made such sacrifices to see England, does that entitle fans to boo?

England's captain Steven Gerrard said in his post-match comments that,

"We have to take that on the chin, they're entitled to their opinion."

But how much can booing a side ever really help them?

They are not, after all, likely to spring to life in the face of a negative reaction from the crowd. England players have previously spoken about how they disliked playing at Wembley, because of the way the fans would get on their backs.

And to make matters worse, it usually during the final, crucial stages of a match.

"Obviously you can understand fans' frustration, they travel miles and miles... but it's important for fans to stick by us... keep supporitng us and we'll try and put things right on Wednesday."

Is it ever ok to boo your own side?