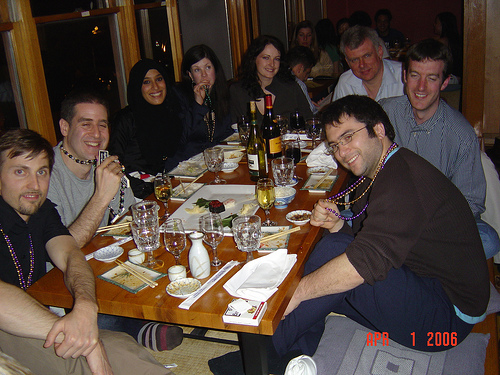 Anyone who knows me will know how deep my irritation at "anniversary journalism" goes. So i'll take the stick that goes with this post as i want to know how you think we should mark the 5th birthday of WHYS at the end of October.

Without getting all misty-eyed, it's fair to say we've come a long way since October 31 2005 - geographically as well as metaphorically.
All the original team - except me- have moved on to bigger things altough i like to think they will always really be WHYS through-and-through.
On-air, we've recovered from a station in Salt Lake City dropping us (on our 4th day !), being derided from within and without to become a well-respected programme i am truly proud of.

So how do we mark this first part of the journey (as they say on the game shows ) , without being too self-indulgent ??

What is it we try to do ? In a lovely e-mail after our Haiti programmes , somebody wrote that we " go to places where other programmes won't and treat the people there with respect and courtesy so that the rest of the world can hear their voices " , which i thought was very nice.

Here are a few ideas we've had , in no particular order (back to the game shows again)...

* Go to places that have defined the last 5 years : Baghdad ? Kabul ?

* Go to places we don't hear from enough - many of you have complained (rightly) that our coverage of South America has not been as good as it should be , should we go there, or Japan ?

* Go to places where disputes are still or have taken place - Gaza/Jerusalem ?

* How about visiting the towns and cities of some of our loyal WHYSers ? Lubna in Baghdad or Abdelillah in Morocco for example...

* Not go anywhere but set up 5 meaty debates on some of the big issues - (Country v Religion for example) and set up good guests well in advance...could be issues that have caught fire since the end of 2005 (do i hear the word "cartoon" ?) and we take a fresh look at them, or what we think the talking points will be over the next 5 ?

* Go to places where we've made a real connection : New Orleans, Soweto, Haiti, ? (probably great for us , but for you ?)

* Or just treat it as a normal week and shut up about it- after all, who cares we've been going for 5 years ?

Start nominating - we remain, as ever, your faithful servants....!

(p.s the pic is the only one i think we have of all the original production team :
Fiona, Rabiya, Kevin, Peter and David. Not pictured : Anu and Steve, our first presenters. Also pictured; lovely SM Shona , and promising newcomer Ros Atkins : Whatever happened to him ?)