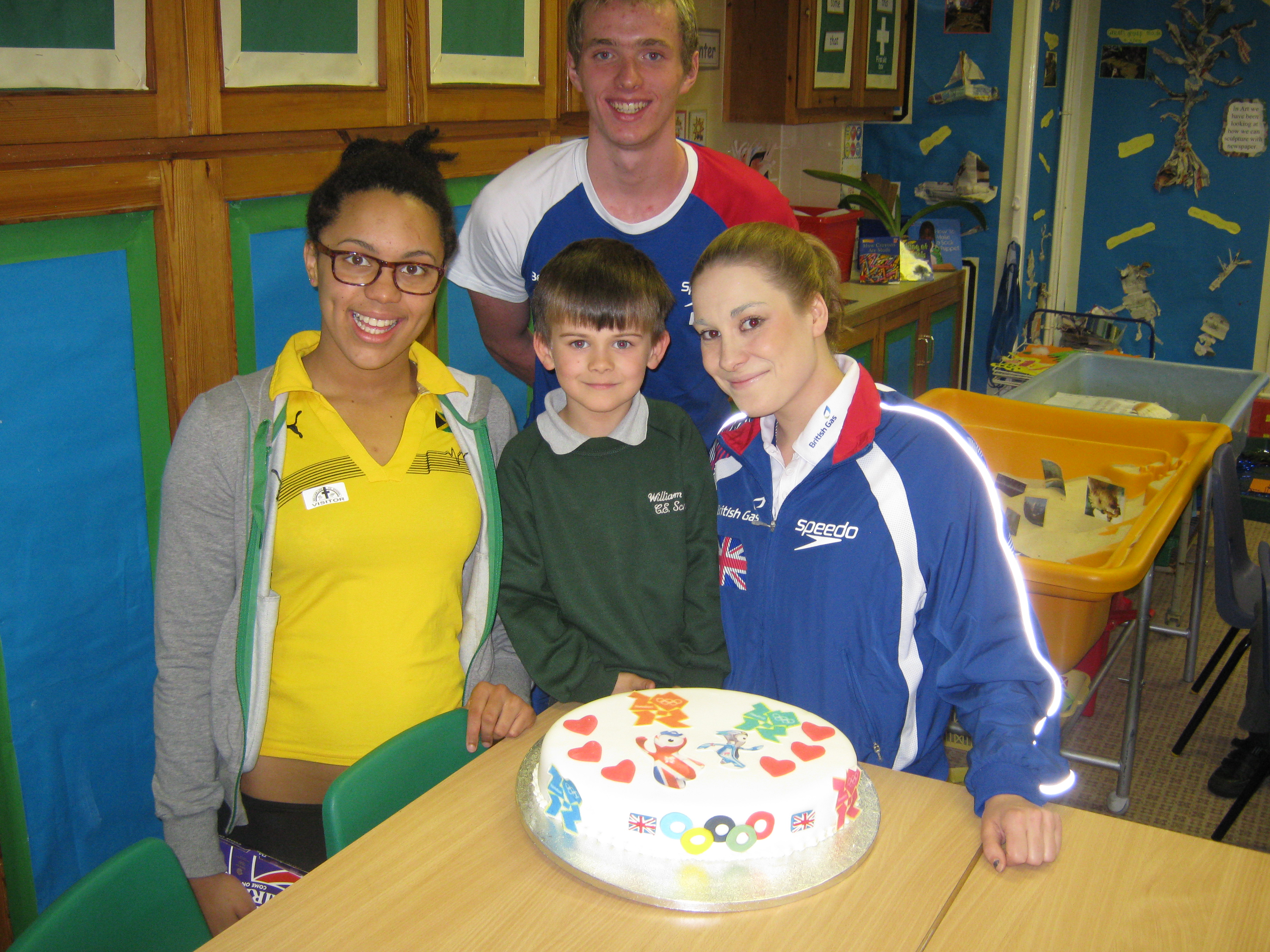 Sam in Year 1 got things off to a good start though as he presented a cake to his class.

The Olympic week was about being healthy and getting the pupils to try something new. And that’s exactly what they did.

Pupils aged 9-11 got a master class in sky diving from the Team GB Sky diving team, while younger children had a go at fencing.

Organiser Alison Harrison said: “The aim of the week was to get the children healthy. All of our 21 classes tried out three or four new sports, in the hope that all children would be inspired to get active and take up a new hobby after the week was over.

Some of the children put on a Taekwondo demonstration with their club teachers; another assembly had Paralympic swimmers and future Olympic swimmers talking about their training and there was also the chance to take up Judo."

Alison added: “They got the chance to have a go at sports there is no opportunity to do in this area.”

There were also five different dance schools that came in to teach ballet, modern, hip hop and Zumba in the lunchtimes, as well as other martial arts.

Instead of running, children in reception were even asked to dance too - Havana Salsa style!

All of the school's classes adopted an Olympic country, and throughout the week learnt about its culture, music and language; plus many visitors came in and brought food for everyone to try.

Alison said: “The kitchen staff also did a super job making the week's menu reflect food from around the world.”

School singers from South Africa and the UK have united for a series of concerts as part of the Cultural Olympiad.

Hemel Hempstead School in the UK have begun singing with the Mgezwa JSS School choir in South Africa in five separate concerts over two weeks in June and July.

Hemel Hempstead School have raised around £10,000 to help the 13 strong Mgezwa choir make the 6,000 mile journey to the UK for these events.

In an amazing experience for the group of teenage singers who are all 14 or 15 and have never travelled outside of their own town of Lusikisiki in the Eastern Cape before.

Megan Botha who has helped organise this coming together of cultures said: “The pupils from South Africa are fantastic, they live life with such enthusiasm and we get a great deal from our visits. For our students, South Africa seems more tangible to them because they are interacting with real people from the country. And for us teacher’s we are reminded how much more to life there is when our two world’s come together.”

Arriving for the first time on Tuesday 26 June, Mgezwa Choir had just three days to practice with the Hemel Hampstead School choir and be ready to perform at Hemel Hempstead’s summer concert on 29 June.

The visit of Mgezwa JSS School choir should also be one to remember for Hemel Hempstead School sixth form student Tom Durrant.

The young musician has composed a new piece of music called “Ukuhamba Kukufunda” (Travelling is learning) which both choirs will perform together for the first time as part of another concert on 4July.

Travelling is learning includes lyrics in both English and Xhosa which is the first language of the Mgezwa learners, although all their lessons are taught in English.

Director of Music Debbie Bailey said of the piece: “It’s absolutely perfect, the composition grows and builds until both choirs sing together for the climax.”

On being asked to compose the piece Tom said: “I was really scared at first, but a massive privilege. The whole process has taught me the value and impact music has on everyone.

The concerts are also a big moment for Tom because of where his song will be performed, Tom added: “The school has played one of my songs before in a concert but nothing as public as this. This is a real venue and anyone can come along.”

The performance of ‘Travelling is learning’ will take place at Watford Boys School on 4July.

Building a partnership over a cuppa 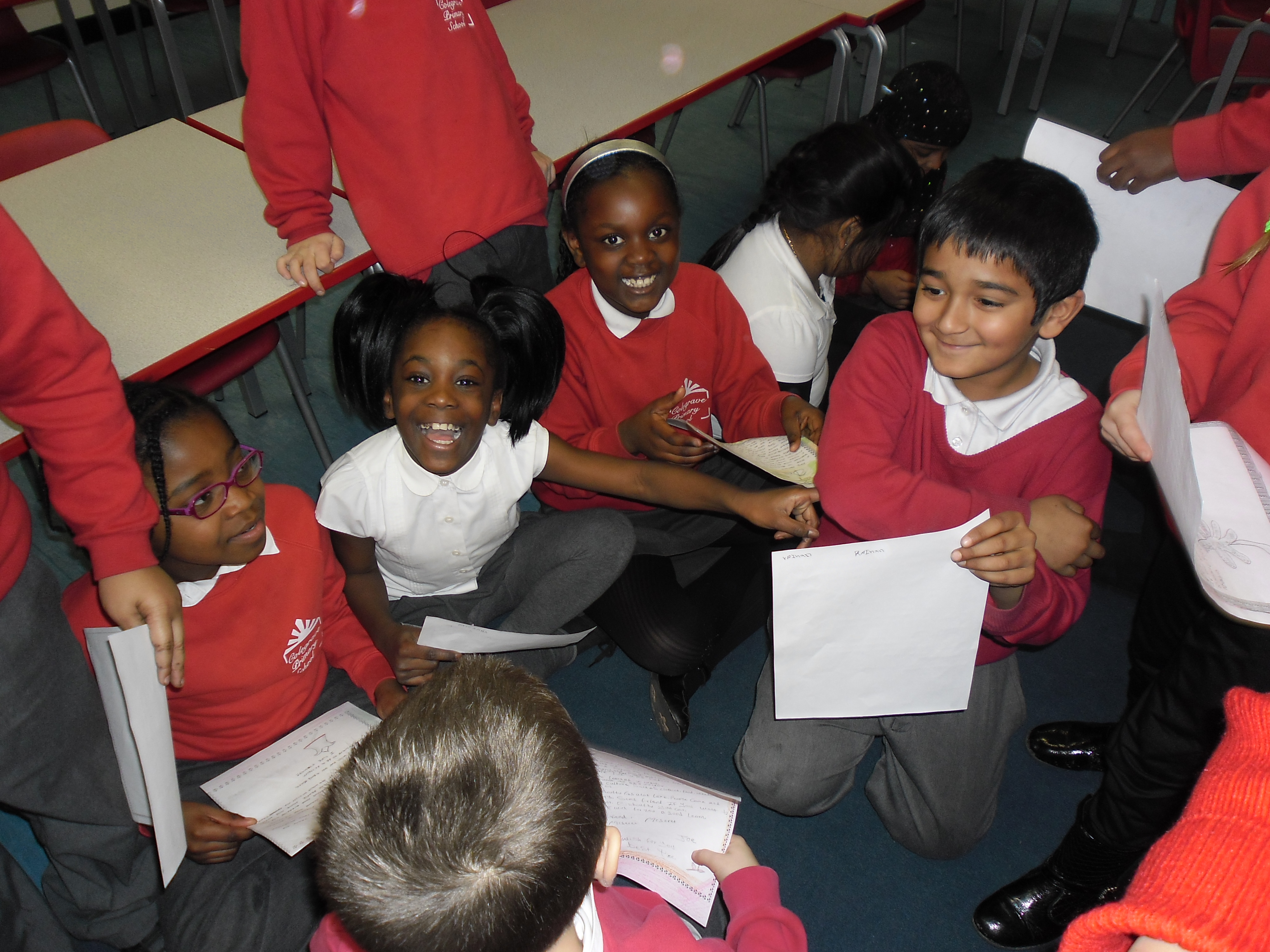 This month a teacher from Colegrave Primary School visits Ethiopia to see how their partner school works first hand.

Johanna Lawrence will visit Derara Elementary School, in Debre Zeit during half term, the school’s first visit to the school since their link began back in September 2011.

Colegrave is less than four miles away from the Olympic Park in London and pupils there have slowly watched the Olympic Stadium’s rise as we move ever closer to this summer’s games.

Johanna said: “Twinning makes the world a smaller place for the children here at Colegrave Primary School. They begin to see they have similarities with someone hundreds of miles away and for the pupils in Ethiopia they feel closer to the Olympics.”

Pupils from Colegrave primary school sent letters to greet their new found friends in October and received replies shortly afterwards and now it is hoped the two schools can build on their relationship with joint work based projects.

Johanna said: “We decided that as a school we would like to apply for accreditation as a fair-trade school, so the children can learn about fair-trade in a meaningful way and ensure that all the products we use are fair-trade. We thought this would make a relevant topic to investigate jointly, looking into the coffee trade in Ethiopia, and examining the impact on local people and farmers.”

The staff at Derara Elementary School would also like to share the importance of coffee in their culture and are keen to investigate issues surrounding coffee in UK and Ethiopia, including the impact of rising coffee prices in Ethiopia.

Speaking of her pending trip Johanna added: “I think it will give me a greater insight into what life is like in Ethiopia”.

A joint art project is planned for the future to reflect the schools interests in Fair-trade and coffee in the near future.

Welcome to the World Class Blog. Keep up to date with the latest from the world of international school linking. Talk topical news and count down to 2012 and the London Olympic Games with schools across the globe. Have your say in our global conversation!

You can stay up to date with World Class Blog via these feeds.

To the sound of drums, pupils of all ages came together to discuss what mattered to them. in a garage under a backdrop of colourful banners and artwork depicting what is important in this world we live in,...

Health Around the World - a large and complicated subject

But this is precisely what schools in Scotland and Malawi have been exploring.   Pumpherston and Uphall Station Community Primary School, in West Lothian, has been looking into what health means. Using resources from the charity Link Community Development,...

A busy classroom in Trinidad and Tobago Picture a small room, partitioned with blackboards. These cubicles are your classrooms. Your school is in the Caribbean. Five primary school head teachers from the London borough of Islington recently went on...

The Olympic Torch will visit one of the Olympic Dreams Network Schools. Highfields School in Matlock, Derbyshire will welcome the torch to the school on June 29th when it comes to the area as part of the relay.    Highfields...