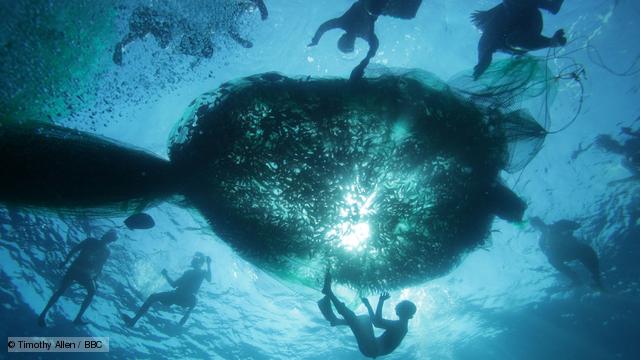 Humans soon learnt how to catch ever greater numbers of prey

Predators have roamed the planet for 500 million years. The earliest is thought to be some type of simple marine organism, a flatworm maybe or type of crustacean, perhaps a giant shrimp that feasted on ancient trilobites. Much later came the famous predatory dinosaurs such as T. rex, and later still large toothed mammals such as sabre toothed cats or modern wolves.

But one or two hundred thousand years ago, the world’s most powerful predator arrived.

We lacked big teeth or sharp claws, huge tentacles or venomous bites. But we had intelligence, and the guile to produce tools and artificial weapons. And as we became ever better hunters we started harvesting animals on a great scale.

We wiped out the passenger pigeon, the dodo, the great herds of North American bison. Last century we decimated great whale populations. Today the world’s fishing fleets routinely take more fish than scientists say is sustainable, leading to crashes in cod numbers for example, while people kill more large mammals in North America than all other causes put together.

But out of our mass consumption of the world’s fauna appears a curious conundrum.

But animals don’t appear to have evolved defences against us. Which raises the question why?

Is it that these animals simply haven’t had time to evolve defences, or lack the variation in their genes to produce them? Or is it to do with the way we hunt them?

These questions are raised by Professor Geerat Vermeij of the University of California at Davis, US, in a scientific paper just published in the journal Evolution. He has been studying the effects of predators on evolution for more than thirty years.

“Usually, when new, more powerful predators evolve or come in from elsewhere, the local species can often adapt by themselves becoming better defended through a variety of means; but this option seems to be closed when it comes to the evolution of humans as super-predators,” he tells me.

In his paper he investigates why this is so.

First he examines how animals adapt to other non-human predators. He shows how prey animals consistently, and successfully, evolve certain types of defence.

The first is growing big. If you can grow big enough, it becomes very difficult, even for predators hunting in packs, to tackle you without injury and bring you down.

Scientific studies have shown that large terrestrial herbivores are by weight up to ten times bigger than their largest predators, which can’t grow mouths large enough to cope with their outsized prey. It explains why lions, wolves and orca tend to avoid fit adult buffalo, moose and whales respectively, targeting more often the weak and young (which are smaller).

If species can’t grow big, then they evolve other defences, such as the passive armour afforded by shells. As predators evolved to drill through shells, many prey species evolved to become toxic. The evolutionary arms race once more. A good example here, says Prof Vermeij, is the cephalopods, animals including squid and octopi. Early versions of these animals had armour, but as they were eaten by fish and toothed whales, they were replaced by lineages that were faster, more aggressive, venomous or toxic.

But then humans came along.

“The spread of modern humans represents one of the great ecological and evolutionary transformations in the history of life,” Prof Vermeij writes in Evolution.

We hunted and gathered on land, but soon began exploiting intertidal zones, taking shellfish and fish. Such intertidal zones were important food sources for prehistoric human populations living in places as far and wide as South America, South Africa, California and Oceania.

Then we started taking big animals. When we did the very adaptations that offered protection against natural predators attracted rather than deterred human hunters. The huge size of mammals such as bison or whales made them juicy targets for meat-hungry humans for example.

Other defensive ornaments became disadvantageous as humans evolved into super-predators. Elephants were killed for ivory, crabs and lobsters fished for their large meaty claws. These once advantageous traits became liabilities in the modern, human-dominated world.

We didn’t just take large species, we also preferentially harvested out the largest individuals of smaller species, a problem that persists today.

Prof Vermeij has examined the degree to which this happens.

He looked at one group of animals, marine molluscs and echinoderms such as starfish, and surveyed all the scientific research into how they have been exploited by humans. We select the largest individuals among 35 of 40 species studied, he discovered.

Sticking to rocks, as limpets do, is no good either as humans have invented picks and knives to prise them off.

Prey animals may do better to become toxic instead, and there is evidence that some marine species have become poisonous to people, either producing their own toxins, or by harnessing toxins produced by microbes. Reef fish and crabs are often toxic to people because they contain unpalatable, and sometimes lethal, dinoflagellates, for example. 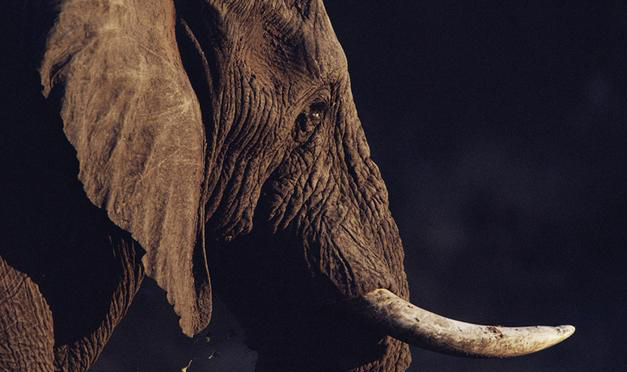 But humans have found ways to get around this too. Many toxins need to be concentrated into organs such as the liver. And humans have learnt to remove these, to avoid their ill effects.

In short the way humans hunt appears to be the main factor preventing animals evolving adaptations to defend themselves from us.

Animals do respond to selective pressures, even over short time scales, and many species have responded to humans being super-predators, says Prof Vermeij.

By eliminating large apex predators, secondary predators have boomed. As cod numbers crashed in the 20th Century, their place was taken by an abundance of shrimp, lobster and crabs, which in turn feed on marine snails. As a result, these snails may have evolved thicker shells to protect themselves against these marauding shell-crunching crustaceans.

But we hunt on too grand a scale, with too much ingenuity, targeting the biggest animals.

“Our arrival and technological history has engendered an enormous change in the evolution of most species on Earth,” says Prof Vermeij.

In evolutionary terms, we leave our prey with nowhere to go. They have no way to defend themselves and simply cannot respond.

And that, says Prof Vermeij, represents a cataclysmic shift for species on this planet, the implications of which, he adds, we have barely begun to understand.