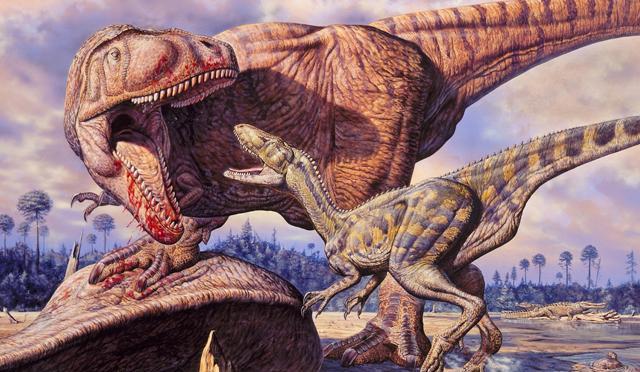 How did carnivorous dinosaurs get their meat? (image:Mark Hallet Paleoart / SPL)

But the truth is that we still know little about the meat eating habits of dinosaurs.

Now some of that may change with the discovery of a fossilised sauropod bone.

Even more intriguingly perhaps, the bone appears to have been bitten or chewed on by a series of different carnivores, revealing something about how groups of dinosaur scavenged carcasses just as big cats, hyenas and vultures might scavenge a kill in modern Africa.

When it comes to the diets of dinosaurs, scientists can make a number of educated assumptions.

Species tend to have mouth parts adapted to their particular diet, and the huge jaws, and rows of long conical teeth of T. rex, for example, suggest it was a top carnivore, one of the largest of all time on land. 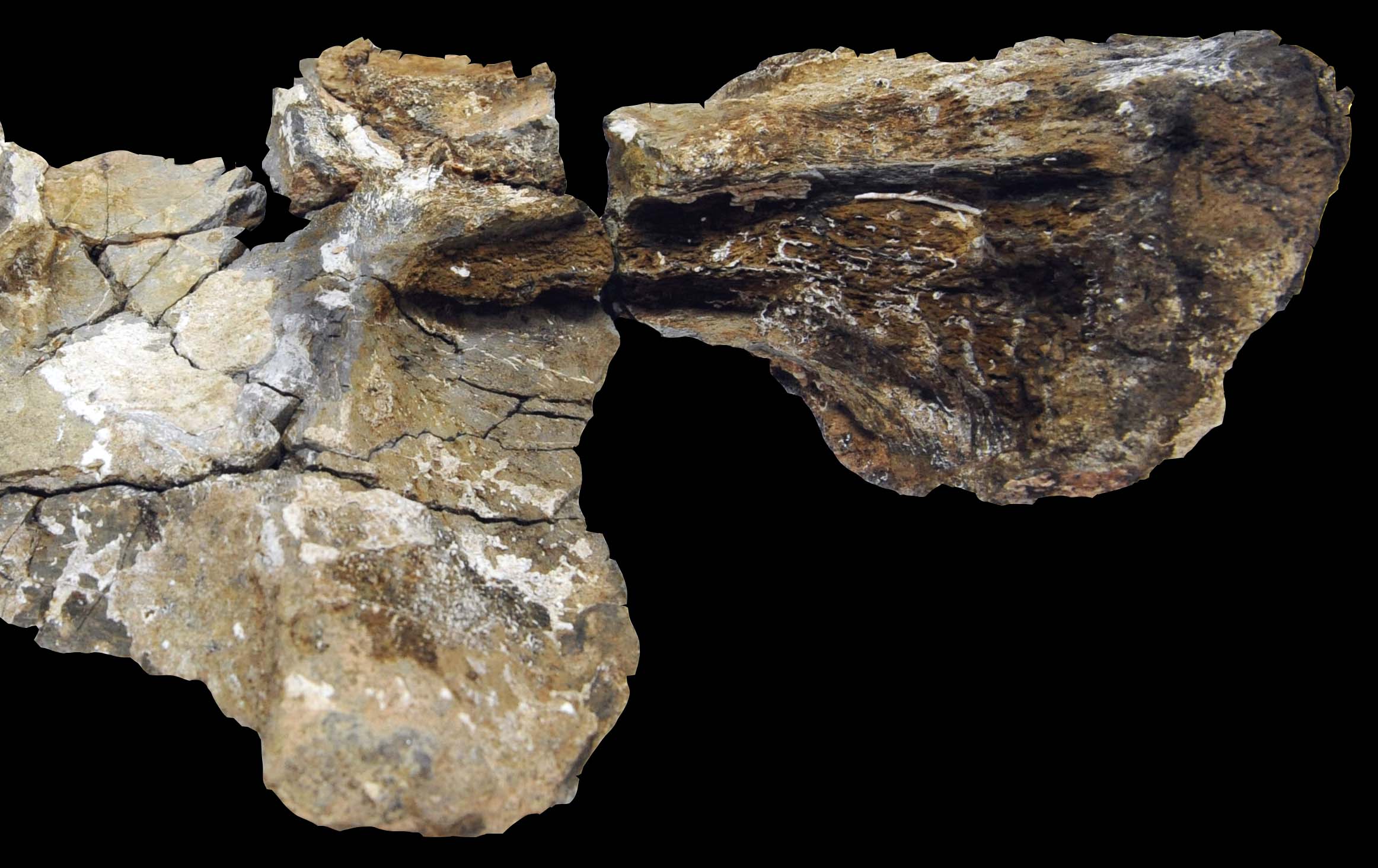 The longest and deepest tooth-marks made by a dinosaur yet documented, gouged into a sauropod tail bone (image: Prof In Sung Paik)

Velociraptor is known to be much smaller than depicted in Jurassic Park, but it too was thought to be an able carnivore, due to its serrated teeth and sickle-shaped claw on its limbs. One well known fossil, called “Fighting dinosaurs”, contains the petrified remains of Velociraptor mongoliensis and the plant-eating Protoceratops andrewsi in combat, providing direct evidence of predatory behavior.

Another fossil, which I reported last year, shows another predatory Velociraptor caught in the act of eating another large-horned Protoceratops.

However, palaeontologists uncovered fossil fragments of this Velociraptor’s teeth alongside scarred bones of the herbivore. The teeth of the predator matched marks on the herbivore's bones, suggesting Velociraptor scavenged its carcass.

So we still cannot be sure whether many carnivorous dinosaurs, including even T. rex, were primarily scavengers or predators.

But the discovery of the sauropod bone provides yet more evidence that scavenging did indeed take place, and on a wide scale.

The bone is a caudal vertebra, or tail bone, of an adult medium-sized sauropod called Pukyongosaurus millenniumi.

It was initially discovered in December 2008, among a bed of bones exposed on a small island within a modern tidal flat in South Korea, in what is known today as the Cretaceous Hasandong Formation. 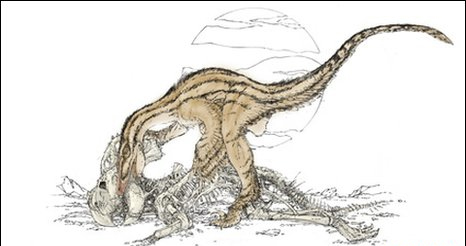 Until being uncovered by its discoverers, Professor In Sung Paik of Pukyong National University and colleagues, the tail bone lay preserved under a thick block of sandstone.

“We took it to the laboratory and cleaned it. I observed some grooves and scars on the clean surface of the bone, and recognised that they are tooth-marks,” Prof Paik tells me.

The tail bone is scarred by a number of teeth-marks, of differing lengths and depths.

One tooth-mark is 17cm-long and 1.5cm-deep, making it the longest and deepest tooth-mark made by a dinosaur yet documented.

The size and shape of this and other large marks suggest they could have been made by a tyrannosaurid theropod – the group to which T. rex belonged.

Other smaller marks criss-crossing the bone were made by other species of smaller theropod dinosaur, say the researchers. They were able to rule out crocodiles or their relatives as having made the marks.

The characteristics of these teeth-marks help reveal how they were formed; whether it be during hunting, predation, scavenging or gnawing on or chewing the bone after all its flesh had been removed. 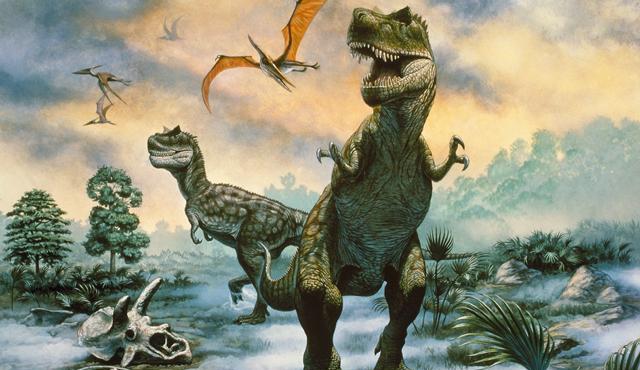 For example, the longest tooth-marks on top of the bone, and a corresponding set underneath, were likely made during the same bite, with the upper teeth of the carnivorous tyrannosaurid making the 17-cm long gouge.

The multiple parallel grooves of these bite marks show they were made by nipping and scraping.

The palaeontologists could also ascertain that the tooth-marks on the bone were not generated during hunting, or an attack when the prey was alive.

In part, that is because the marks are too long and deep to have been inflicted during a surprise attack, and are not unbroken, as also would be expected during a hunt.

No other P. millenniumi bones found at the site showed evidence of predatory attack, again pointing to scavengers feeding on this single part of the animal.

The little physical damage around these tooth marks also indicates they were made when the bone was still wet and covered with some flesh, report the scientists in the journal Palaeogeography, Palaeoclimatology, Palaeoecology.

A series of smaller tooth marks reveals that the sauropod’s body was scavenged by a succession of different theropods of different sizes and types, with diverse feeding strategies.

These weren’t made by carnivores biting into the bone, but by random tooth strikes, made perhaps as the scavengers tried to puncture the bone to get nutrients within.

This single sauropod tail bone then, bears marks that allow scientists to reconstruct a unique picture of how dinosaurs scavenged carcasses.

Prof Paik’s team believe that a large tyrannosaurid theropod came across the carcass, and defleshed it, producing the record breaking teeth-marks.

It also tried to gouge the bone to get inside it. 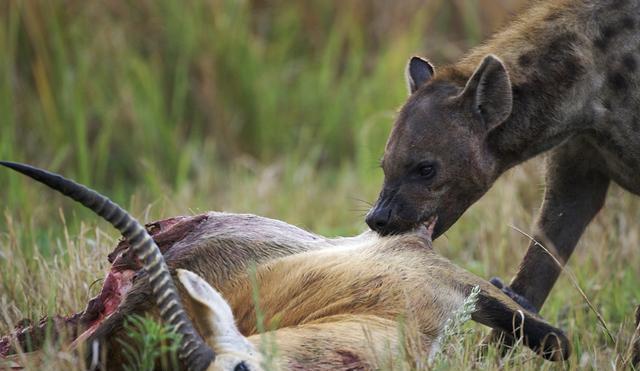 A series of smaller carnivorous theropods then happened across the leftovers and tried to puncture the bone to again get at the nutrients within.

This is a scenario familiar in the modern world. Hyenas may happen upon on a recently killed or deceased antelope, for example, and opportunistically take much of its flesh. Then smaller scavengers arrive at the carcass to pick over the bones taking what they can.

In the Cretaceous period, however, these scavengers may, like T. rex, have stood up to 4 metres tall and weighed 7 tonnes.