Penguins take to the air 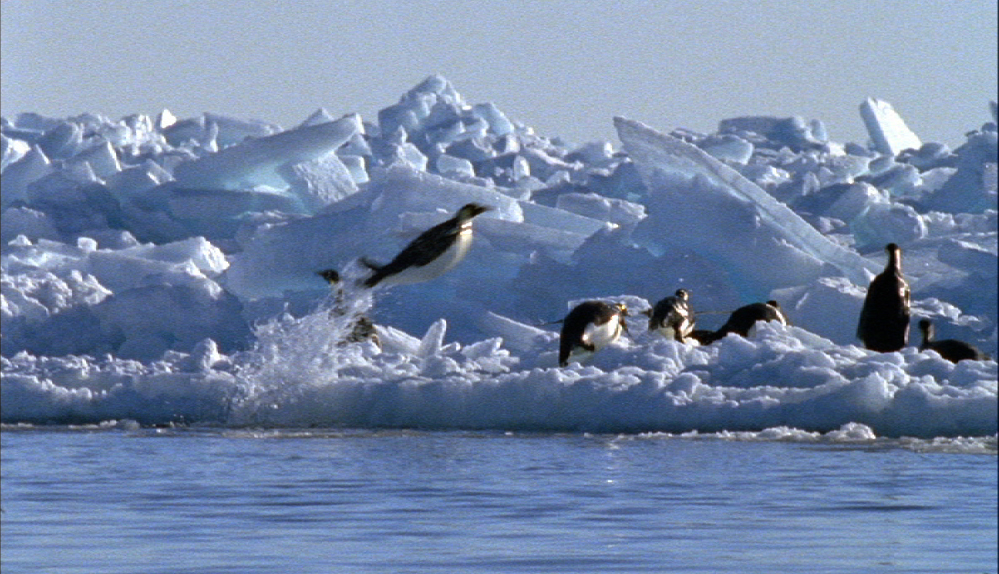 Penguins can’t fly. But they can get airborne.

In fact, taking to the air, for even a brief instant, is actually a vital strategy penguins employ to avoid being eating by predators such as leopard seals or orcas.

Now scientists have worked out the secret technique that penguins use to get airborne. It involves wrapping their bodies in a cloak of air bubbles – and it turns out to be the same technique that engineers use to speed the movement of ships and torpedoes through water.

Another interesting aspect of the discovery is that it was made by scientists examining in minute detail footage shot for the programme Blue Planet, a landmark natural history series filmed by the BBC’s own Natural History Unit.

It sounds implausible that penguins might get airborne. These short, squat birds, which tend to live in the colder parts of the southern hemisphere, are renowned for their waddling walks and flapping flippers – which are famously great for swimming, but useless for flying.

But many species of penguin do take to the air.

Due to their body shape, and poor climbing ability, it is difficult for penguins to haul themselves ashore, especially onto rocky shorelines. And it can be almost impossible for a penguin to haul itself out from the ocean onto sea ice. 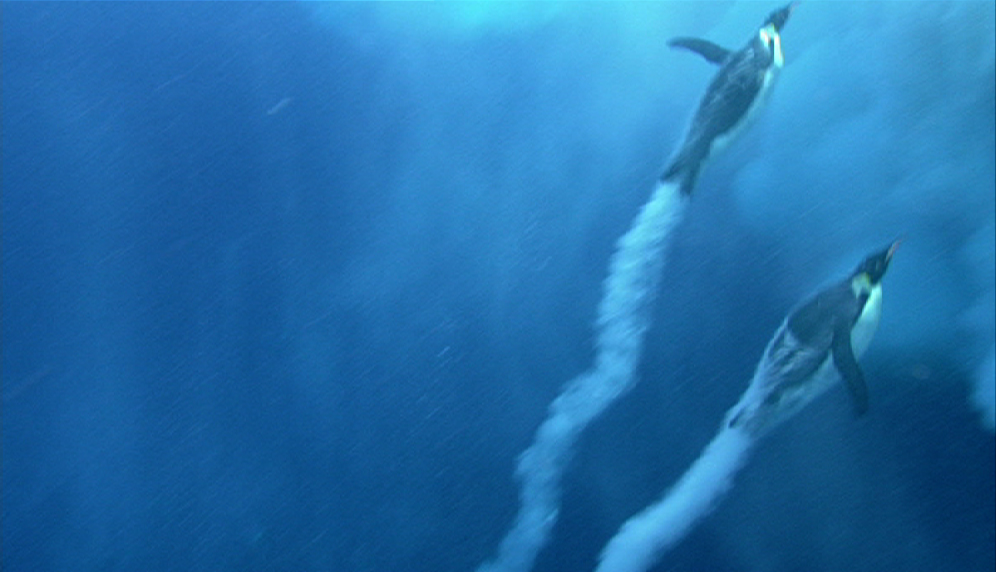 So penguins leap ashore: they swim at speed to the surface, burst through and briefly get airborne to clear the rocks or ice shelf, and land on their breast.

Smaller species, such as Adelie penguins, can leap 2-3 metres out of the water, landing unscathed onto broken rock. Bigger species, such as Emperor penguins (the largest of all), reach heights of 20 – 45 cm, but that is enough for them to leap out of holes in the ice and clear the ice’s edge.

But one aspect of this leaping behaviour has long puzzled biologists. As the birds swim toward the surface, they trail a wake of bubbles behind them. No one knew where these bubbles come from, or why there are there.

Five years ago, that began to change when a group of biologists met in a pub in Cork, the Irish Republic, before the start of a scientific symposium.

Professor Roger Hughes from Bangor University in Gwynedd recalled how he’d seen a wildlife film in which penguins trailed bubbles in this way and asked his colleague Professor John Davenport, of University College Cork, if he knew why they did so. 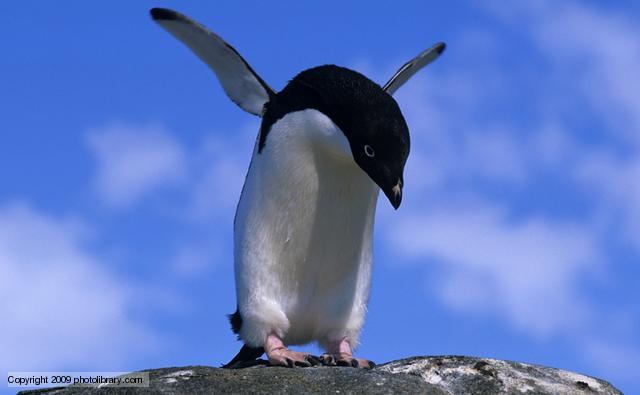 Professor Davenport did not, but set off to find out with his PhD student Marc Shorten.

Together they obtained footage from the BBC of its Blue Planet series, which filmed breaching penguins for its Frozen Seas episode.

(Watch below how Emperor penguins first evade a leopard seal, then when the coast is clear, they trail a wake of bubbles before leaping from the water)

The scientists slowed down this footage, analysing the speeds and angles of emperor penguins exiting the water, developing a basic biomechanical model of what was going on.

During this analysis, the researchers made some interesting discoveries. The bubbles of air being trailed by the penguins weren’t coming out of the birds’ lungs via the beak.

Instead, they were coming from the birds’ feathers.

“We were amazed to find that,” Professor Davenport tells me.

The researchers also realised that these air bubbles form a “coat” around the birds’ bodies as they rocket toward the surface at speeds of 19km an hour.

To investigate further, the three scientists teamed up with Professor Poul Larsen from the Danish Technical University in Lyngby, who brought his expertise in mathematics and fluid mechanics to the research.

The four scientists have now just published the results of their study.

The “coat of air bubbles” first noticed on the Blue Planet footage is indeed what enables the penguins to get air as they leap onto land.

Penguins have great control over their plumage, Professor Davenport tells me.

They raise their feathers to fill their plumage with air, then dive underwater. As the birds descend, the water pressure increases, decreasing the volume of the trapped air. At a depth of 15-20 metres, for example, the air volume has shrunk by up to 75%.

The birds now depress their feathers, locking them around the new, reduced air volume.

The penguin then swims vertically up as fast as it can, and the air in the plumage expands and pours through the feathers.

“Because the feathers are very complex, the pores through which the air emerges are very small so the bubbles are initially tiny. They coat the outer feather surface.”

This air insulation effect is known to boat architects and engineers. By placing a layer of air around a ship’s hull, or torpedo, for example, designers can dramatically reduce drag, and speed up the boat or weapon’s passage through the water as a result.

But “this process has never been thought of before as having a biological role,” says Professor Davenport.

The penguins also appear to have overcome one other issue that blights naval architects trying to exploit “air lubrication” underwater. 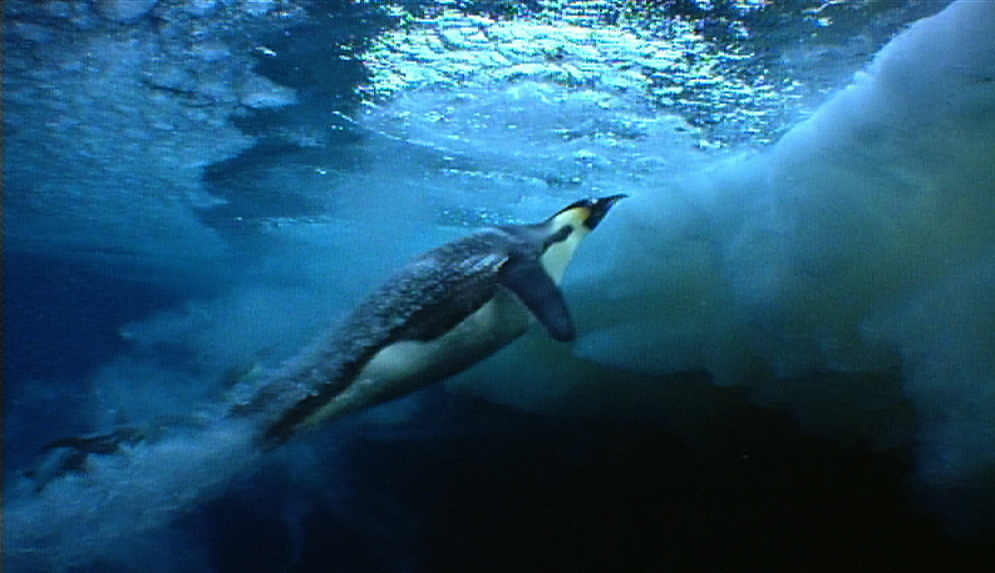 The moment before lift off (image: Blue Planet, BBC)

Although a coat of tiny bubbles dramatically reduces drag, it can also have a major slowing effect if the bubbles reach a ship or torpedo’s propeller. That’s because the propeller starts pushing against air not water.

However, a penguin’s flippers, its means of propulsion equivalent to the propeller, are held outside of the bubble clouds, so they are not affected.

This wonderful insight into how penguins leap out of the water has just been published in the Marine Ecology Progress Series journal.

It brings a whole new meaning to the expression “getting air”.