Tiddle's law: should we restrict cat ownership to preserve wildlife?

Here’s a question for all you cat lovers.

Should there be a limit on the number of cats you are allowed to keep? Say, maybe, just the one per household – a Cat Cap if you like, or a Single Puss Policy?

And should this single cat be registered with the authorities, sterilised, and confined to home, or only let out under curfew? Tiddles must have the right papers, lack testicles, and avoid hanging around the block out of hours - otherwise Tiddles must go.

Oh, and on the few occasions Tiddles is allowed out, he must wear a special collar that will alert mice and birds to his presence, to ensure they don’t become his lunch.

Legislating cat ownership this way sounds pretty heavy handed, draconian even. Would we even need a pet police to enforce the rules?

But I mention them to raise an important issue – to what extent do our domestic pets impact other animals living wild? Is our pet predilection causing a conservation problem, one that we need to address?

The suggestion that it could be, and we should think about restricting or controlling the animals we bring into our homes, appears in a new research paper published by Australian scientists in the journal Biological Conservation.

Michael Calver and colleagues at Murdoch University in Western Australia, and the University of Sydney, argue for why we might consider using the precautionary principle when it comes to cat ownership.

They start by laying out the context.

There is now abundant evidence that feral cats can cause the decline or even elimination of local wildlife. A yet to be published review by ecologist Elsa Bonnaud at the Mediterranean Institute for Ecology and Palaeoecology in France and colleagues suggests they are responsible, at least in part, for 8% of global bird, mammal and reptile extinctions and pose a significant threat to almost 10% of critically endangered birds, mammals and reptiles.

But feral cats are pets no more – and you can’t compare a ranging hungry street cat with a well fed pet that spends most of its time indoors or in its owner’s back garden. 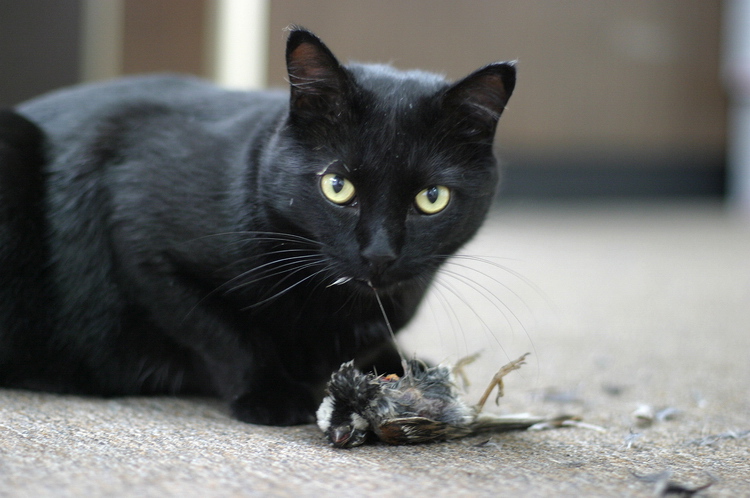 So Calver and colleagues detail what we know about the impact that domestic cats have.

In some urban areas, cats are kept at such artificially high densities that more than 100 can live in any square kilometre.

A number of studies have tried to evaluate how many wild animals these cats kill.

A 2003 study in the journal Mammal Review (view it as a PDF) suggested that cats predate 5 million reptiles and amphibians, 27 million birds and 57 million mammals in the UK each year.

In the US, some estimates say 100 million birds are killed by cats each year (a Forest Service report by Erickson et al in 2005) and “more than a billion small mammals”, according to a study published this year by the American Bird Conservancy (view it as a PDF).

These figures are controversial, and as Calver and colleagues point out, some of them may be exaggerated.

Focusing on the impact pets have on wildlife can also significantly deflect attention from other far more significant causes of wildlife loss, such as habitat destruction.

However, until the debate is resolved, say Calver and colleagues, we should consider adopting the precautionary principle.

That means taking steps to limit the impact pet cats may have on wildlife - in case it turns out that their impact is indeed large.

These steps could include the previously mentioned cat cap that limits owners to two or fewer cats per household, neutering, the use of cat licenses, confining pets and cat curfews, or even complete bans on cat ownership within a kilometre or two of environmentally sensitive areas, particularly those that provide habitat to rare prey species.

Although they sound draconian, many or all of these measures are already in place (though not at the same time) in different municipalities around the world, often enforced by local councils.

It’s a tricky and controversial topic.

For example, predation-prevention collars, such as the straightforward bell on a cat collar, or a collar that sounds an electronic alarm, can reduce predation of wild animals by more than 50%.

But while statutory neutering of cats may prevent unwanted litters, there is little or no evidence that neutered cats are less accomplished hunters or stray less far when out hunting.

Ultimately, the scientists say, the first step should be to survey citizens and cat owners to see whether they think their cats cause a problem for wildlife, and what if anything should be done about it.

So, what do you think?

Are pet cats a threat to wild animals? And if so, how should their numbers or hunting urges be curbed?