Putting the we back into media 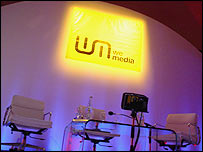 One overwhelming issue that emerged out of the We Media event was the continuing divide between the mainstream media and the blogging community.

The two are talking to each other, but all too often this conversation descends into a war of words. Both sides have a tendency to adopt a defensive position when challenged, and this in turn leads to a dialogue of the deaf.

This sort of approach leads nowhere.

Continue reading "Putting the we back into media"

It's been a couple of long days, with a lot of ideas flying around the room, but the We Media global forum is coming to an end.

And it is ending with an appeal for ideas to change the world for the better. Yes, it sounds like a noble intention, but this is the nature of meetings like this.

As the We Media comes to an end, the discussions have got round to the issue that is bothering most media organisations - how can we make money in this new digital world?

Carolyn McCall of The Guardian highlighted the challenge facing companies like hers. Newspaper rely on advertising and classifieds. But readers are moving online and using services like Craigslist and expect to use these services for free.

The short answer is that no one has the answer, but there were a few possibilities.

The world talks back

Today has been a very different conference to the event hosted by the BBC on Wednesday. Part of this is because of the different venue. 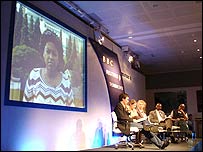 Mostly it is because we are hearing from voices from Asia, the sub-continent, the Middle East and Africa. It contrasts to yesterday when it was mostly the head honchos from big media speaking.

The message coming through is that the media around the world is maturing and reporting on its backyard on its own terms.

Wilfred Kiboro of the Nation Media Group in Kenya didn't mince his words.

"International media outlets do a great disservice to Africa by stereotyping Africa," he said. "We are not in the stone age."

Continue reading "The world talks back"

We're into big idea territory with a live satellite link-up with Jeffrey Sachs, director of the Earth Institute, in New York.

After some hiccups in getting the connection up and running, Sachs laid out his vision - ending extreme poverty, which he believes we can do by 2025.

To do this, he is talking about giving villages in Africa the tools to help farmers. This can be as simple as providing fertilisers. With a little bit of help, he said, you can triple food production, tackle malaria and provide clean drinking water.

News and distrust in the Arab world

The discussions on the media in the Middle East is highlighting the gulf between the news organisations in the West and those in the Arab world.

Rami Khouri of the Lebanon Daily Star newspaper set the tone. He argued there is a misperception in the West that the Arab media incites anti-western feelings. His position is that the media reflects the views and concerns of its audience.

Continue reading "News and distrust in the Arab world"

Before the conference broke up for a rather good lunch, one theme was emerging from the contributions from China and India.

What is becoming apparent is how the media in these countries is starting from a very different point to the West. The media doesn't have a legacy issue to do with, which is another way of saying that it is young and fresh.