A beginner's guide to cricket

What would you do if I asked you to throw me a googly, bouncer or yorker? And if I asked you to stand at silly mid on, forward point, or fine leg? Whether you're talking the language of bowling techniques or fielding positions, it can seem like there's an impossible amount to learn about cricket. 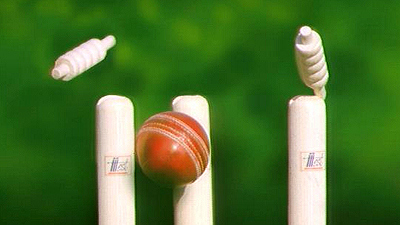 However, the basics of the game are pretty simple - and if there was ever a time to learn more about the gentleman's sport, it's now. After winning the recent series against India 4-0, England have just been named the world's number one Test side. That's right - England are now officially the best team in the world! So if you'd like to get started in this most British of games, here are the sites that can help.

First of all, why not get an idea of the rules? This section of the BBC Sport site has a fantastic overview, and I suggest you start with this page which outlines the aim of the game. The site explains what an innings is (each time a team bats) and how a team wins a game of cricket (basically, score more than the other team!). You can find out why players need to protect their wicket, how batsmen get called 'out' and how players score sixes and fours (or a single, for that matter) to tot up runs which can win them the game. There's also this useful page from America's ABC News.

To follow the latest cricket results, the BBC's Cricket site is a great start. Whether you'd like to follow international cricket or the county game, the site has the latest scores, fixtures and even offers the chance to listen to the Test Match Special podcast - which offers wit and analysis from Jonathan Agnew and Geoffrey Boycott.

There's other great sites too. Sky Sports has a cricket section which gives you great videos, feature articles and expert columns from greats of the game, like former England captain Mike Atherton. There's also the official website of the England and Wales Cricket Board (ECB), and the very good cricket sections of newspaper websites such as The Guardian, The Telegraph and The Independent.

Following the game is one thing, but to really understand cricket and fall in love with it, why not pick up a bat and actually play? The ECB's Play Cricket bills itself as the "official source of all information and statistics on club cricket for all cricketers and supporters." By going into the directory search on the left side of the page, you can either search for a specific club (if you know who your nearest club is) or search for the contact details for your local county board (mine is Middlesex) who can tell you who your nearest club is.

I hope this gives you a great start in a game that's not only synonymous with the sound of leather on willow, long summer days and the ideal of sportsmanship, but also a game that right now, we seem to be pretty good at - and it's not often you can say that!

Charlie is a journalist and scriptwriter specialising in articles and films featuring deaf culture and sign language. He has written for The Guardian online and has contributed to programmes for Radio 4, while his films have won international awards. He also works in the arts, helping to make theatre accessible for deaf people.

WebWise offers an easy to understand, straightforward, uncomplicated guide for computer users of all abilities. WebWise allows them to grow in confidence, engage with technology and improve their lives.

Got something you'd like us to cover? Drop us a line.

Click here to go to the main BBC WebWise homepage

You can stay up to date with WebWise Blog via these feeds.