Don't panic! Nothing's ending... this blog is just going to be merged with the BBC Internet blog. Or they're merging with us.

All this means is that any time a web developer wants to explain what they've been working on, they'll do it at https://www.bbc.co.uk/blogs/bbcinternet, rather than here.

And suddenly, the Internet blog will start to be extra-interesting.

Thanks for your comments... see you on the other side.

Setting your location on the new BBC Homepage

Before I joined the BBC Homepage team, the only thing I'd ever really done on the page was to set my location so that I could see my local weather. It turns out that I'm not alone - about 2.5 million of the visitors to the homepage each week will have set their location at some point - quite a few people.

So, when it came to the new version of the homepage, we knew that getting this right was important. But we also wanted to make it better than it was before. But how to do this? In the end we decided on two things - let users set their location to anywhere in the world (good for international users, or people who want to see what the weather's like where they're going on holiday), and stop requiring a full page reload every time a user's location is set.

The first problem was letting users set a location anywhere in the world. Unfortunately, Postcoder (the data set used by the previous version of the homepage) only knew about places in the UK. Granted, it knew about a huge number of places in the UK, but it was still limited to the UK. So, we had to look at a second data set that knew about the rest of the world - the BBC Weather Search API. This API knew about places all over the world but unfortunately it knew a lot less about the UK than Postcoder did.

This turned out to be a problem. Whilst the Weather Search API knew about the UK's postcodes, it didn't know about a lot of the smaller places within the country. So, for example, whilst it knew about Leicester, it didn't know about Belgrave (the home of Leicester's "Golden Mile" and the largest Diwali celebrations outside of India). This was obviously a problem. Understandably, people would expect the new homepage to know about at least as many places as the old one did, so just using the Weather Search API was not going to be possible.

After a bit of head scratching, I did the obvious thing: I took the best bits of each data set and used them to generate a cohesive whole. Now, whenever a user tries to set their location we send queries to both Postcoder and to the Weather search API. We then throw away anything the Weather Search API tells us about the UK, and just use its worldwide data along with all the data that we previously had for the UK from Postcoder.

Of course, things weren't actually quite that easy. Let's walk through the actual process we have to go through to determine a user's location:

Phew. That's basically what we have to step through every time a user sets their location. Essentially, every time a user tries to set their location to a place in the UK we have to make at least three calls to extrnal APIs (and sometimes more) to gather all the data we need to localise the page. And this is before we even get to pulling in the data for the localised modules!

And, with this change in place, the localisation popup on the homepage suddenly became aware of places all over the world. Users can now keep track of the weather in Istanbul just as easily as they can in Dunstable.

Now, this obviously wasn't pleasant. Having to wait for a full page refresh can be tiresome, and the flash of no content as a new page loads just doesn't look very nice. So, one of the aims we had with the homepage refresh was to stop that, and instead just update the portions of the page that needed updating.

When the user sets their location on the new homepage we make several AJAX requests back and forth to the server. These requests allow us to update the model we store that determines how the page is to be laid out for individual users. In the Old World, we would then have forced a full page refresh to enable the user to see this new layout. In the new homepage, we instead return a blob of JSON data to the user's browser.

That JSON data contains everything we need to update the page. Here's a simplified view of the data we return:

Here, you can see that each module that we're going to update on the page is defined within its own section of the returned JSON. Each section is named after the ID of the HTML block that needs updating, and contains (amongst other things) a big block of pre-rendered HTML. This allows us to do the simplest thing possible in the JavaScript of just replacing one bit of HTML with another, and gives the added benefit of being able to reuse the same logic that was used to generate the module's HTML when JavaScript isn't available.

The other obviously different thing about setting your location in the refreshed homepage is the overlaid panel that you now see when you enter your location. The nice thing about this panel is that it's provided for us by the BBC Glow team, and it allowed us to take a form that already worked on the page without JavaScript and inject it with a new look and feel. 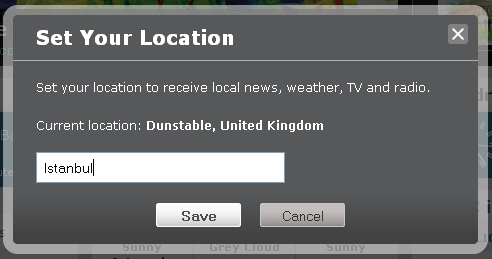 The fact that this sort of functionality (and a whole lot more) is provided for us by the fantastic Glow team makes our job a whole lot easier.

Of course, not everything was fun and games in the land of location setting. One issue that had managed to slip by me until fairly late in the day was that some places have the option of taking their news from one of two different areas. A good example of this is Chepstow on the Welsh border.

For good reason, there are many people who live in Chepstow who identify as wanting to be provided with Welsh local news. Likewise, there are others who would prefer to receive local news from Gloucestershire. The way we now deal with this on the homepage is by giving users the option to choose between these places within the same popup that they had previously chosen their main location in.

So, that's what went into the new Homepage's localisation options. Frankly, it's a bigger thing than I expected when I was first given the work to complete. As the developer who worked on this I'd like to thank each and every person who took the time to leave feedback during the Beta process - you really helped to make the homepage what it is now.

Good news! The clock has returned to the BBC Homepage.

When we launched the Beta Homepage we received feedback from a number of you who missed the clock, so we've turned it into a module allowing you to position the clock where you want it on the page (or shrink it or remove it altogether). It continues as before to show your computer's local time and date.

As part of moving the clock to its own module, it now makes use of upcoming HTML standards. Flash is no longer a necessity as the module uses HTML5 Canvas to draw and animate the clock face. This means users of newer browsers (and iPhones) will see the clock ticking on the page even if they don't have Flash. Of course, if you're using an older browser the Flash version will continue to load as usual.

If you're interested in how our Canvas code works, here's a snippet showing how to draw the clock face:

The display is then redrawn every second to move the hands to the current time using Glow Animations.

The clock has come a long way since it first appeared in our idents and continues to live on in new technologies.

You can stay up to date with Web Developer via these feeds.

Hello. My name's Mark (as it says up at the top of the post) and I'm on the team developing BBC iD, the new membership system that's being gradually rolled out across the BBC site. One of the important features...

Here's another crop of links that caught our eye recently. We're changing focus a little this time, pulling out some more technical posts. In praise of Git's index Aristotle Pagaltzis has a good writeup of the benefits of Git's index...

Here's another set of articles that have caught our attention during the week... Semantic Versioning Tom Preston-Werner, one of the co-founders of GitHub, has written a specification for a standard software versioning scheme. Many of our teams already use...

Like at any other company, the email accounts and feedreaders of our developers are always overflowing with new articles from around the web. Here's a quick set of some of the links creating discussion among bbc.co.uk development teams this week....

Popular topics on this blog: