(This forecast will be regularly updated. This entry: Sunday 13 June, 15:30hrs BST)

NOWCAST UPDATE: Note McGill (Montreal) radar is currently tending to pick-up spurious light-rate returns with no ground truth observations to support falling PPN at this stage. Some small isolated showers are, however, forming further west and NW, as evidenced periodically on the feed from Landrienne radar. 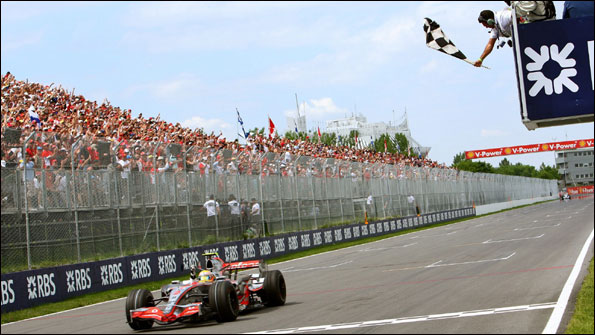 I noticed a comment written on a web forum, regarding the last race weekend forecast in Turkey:

"It's easy: Sunny and dry," this person wrote.  "....so why bother with forecasts when it's just so obviously going to stay dry?"

Well, it may have seemed that way, but the 'very small risk of showers' highlighted in my blog that day was added because not all the forecast models were so bullish on keeping things 100% dry.

Indeed, during the race, a towering Cumulus congestus cloud - and associated moderate shower - formed close to the circuit. As it happened, it was the only one within a radius of many miles, but proved just how tricky offering this sort of site-specific forecast detail can be!  It's all the tougher, of course, when forecasting ahead for a local weather window of only a mere couple of hours.

So, let's see how well the forecasts square with reality this time around! Off we travel to the fantastic Circuit Gilles Villeneuve in Montreal, thankfully reinstated to this year's race calendar after an absence in 2009 - the first time it had been dropped since 1987. It's a race that has often become something of a Safety Car showcase and equally, one where inclement weather has proved an important component in the track action here on the Île Notre-Dame.

Summary: Although much of southern and midwest USA will be enduring increasingly hot temperatures later this week, Montreal will see maxima remain closer to seasonal norms, or slightly above into the weekend.

A far less less progressive advance of very warm conditions up into Canada has been the solution favoured by two models (ECMWF and UKMO-GM) all week. Both keep the heat ridge away to the SW and the (US) GFS model, originally far more bullish in heating things up, has now drifted into better agreement. Expectations are thus for temperatures to range into the mid 20's C through Friday-Sunday, with increasing humidity during the weekend, too.

As a fairly weak ridge of high pressure develops through Thursday night from Hudson Bay southeast to the eastern seabord of the USA, the prospects for Friday's on-track action during Free Practice 1 and 2 look rather cloudy but dry after what could be a rather foggy start in some districts around Montreal and the St Lawrence valley.

However, as the upper level WNW flow then establishes and persists into the weekend, we'll see a threat of more disturbed conditions being fed eastwards through Ontario, Wisconsin and other districts adjacent to the Great Lakes.

US NOAA-NWS rainfall accumulation prediction, above, for Saturday is indicative of potential for rain during the morning and showers during free practice 3 & qualifying in Montreal (red dot).

Saturday heralds an increased threat of wet weather, enhanced collectively in output over the past 48hrs from the model ensemble. Rain associated with a frontal boundary edges southeastwards through Ontario and Quebec this morning, as it runs through Montreal and south across the US border into Vermont and environs. This will wash the circuit back to 'green' conditions. Thereafter, it's all about the condions left in it's wake. High-resolution precipitation modelling today from NOAA-NWS suggests the rain clears southwards ahead of FP3, with a few showers then just about possible into the afternoon, coupled to some brighter spells slowly developing.

In a rather complex sandwich on Sunday, high pressure is building to the north around Hudson bay; an upper trough sinking southwards from east-central Canada; a quasi-stationary warm front sitting much further south; and a low pressure system approaching eastwards over the northern Great Lakes later during the day, swept-up within the prevailing flow around the high pressure to the north of Montreal.

Cloud will tend to increase steadily during the day as the influence of the approaching low becomes more evident. For the most part, there's a general lack of major forcing (e./g., absence of nearby frontal influences). The threat of rain will increase overnight and into a distinctly soggy looking spell through Monday.

So, a low chance of showers this afternoon. I anticipate the 'centre of gravity' for the threat of deeper convection to be held further southwards /  westwards.

Dry weather looks the statistical likely outcome for the race, with Probability of Precipitation (PoP) predictive model solutions still ranging 30 to 40%. With increasing cloud, some of the model output maximum temperatures (into high 20's) look a tad optimistic; so we can shave a degree or two off these and offer a likely TMax this afternoon around 25C.

Current forecast confidence for Friday's dry and settled theme is high; high for Saturday's potential for mixed weather and high for Sunday's mostly dry conditions and small chance of showers.

I'm Ian Fergusson, a BBC Weather Presenter based in the West Country. From benign anticyclones to raging supercell storms, my blog discusses all manner of weather-related issues. I also provide updated race weekend forecasts tied to our BBC coverage of Formula One. You can follow me on Twitter, too.

You can stay up to date with BBC Weatherman Ian Fergusson’s Blog via these feeds.