This page has been archived and is no longer updated. Find out more about page archiving.
BBC ONE 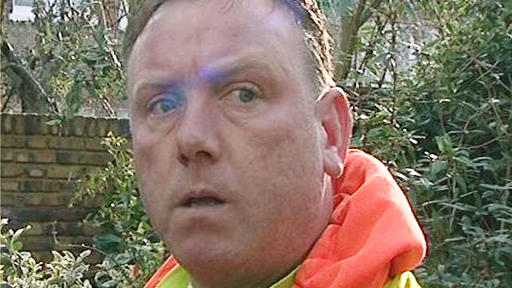 Cutting down a tree can be a risky business, especially in your own back garden. Plus if you live in a conservation area or if you have trees protected by tree preservation orders, you need to have permission from your local council to commence or commission tree work. If you don't, both you and the contractor who does the work risk a fine of up to £20,000.00.

But that's something which doesn't bother our rogue trader this week, David Stanley. David is operating as a tree surgeon in and around West London. He has used multiple company names, but he's currently calling himself London's A1 Tree Services, which is not to be confused with other ompanies with similar names.

Local council tree officers in London have told us David Stanley's been causing trouble in the capital for years; by incorrectly telling homeowners with protected trees that they do not need permission to prune or fell them, so that he can get the work.

We also know of complaints against David regarding him overcharging, inventing work, pruning trees so severely that they die, and providing fake names and company addresses. In the past he's also falsely passed himself off as an Approved Contractor of the Arboricultural Association, and it took High Court action in 2007 to stop him.

Complainants with something to bark about
Matt and Dan head to the streets of West London to talk to two of David Stanley's unhappy customers.

Veronica Kotziamani was approached by David Stanley just after Christmas 2009. A 150-year-old lime tree in her front garden had taken a battering in an autumn storm, and she was concerned about some branches. David Stanley cold called and told her that she really did need some work doing to the tree.

Five hundred pounds and some very severe pruning later, David left with the promise of sending her a 'tree report'. No tree report arrived in the post but a letter from Kensington and Chelsea Council did, telling her that she could face prosecution for her unauthorised tree work.

Matt also met Nick Roberts, whose 50-year-old flowering cherry tree needed pruning, back in March 2004. Nick went through the phone directory and picked out Town and Country Tree Care's advert (which is not to be confused with other companies with similar names), because it featured the Arboricultural Association's logo. Nick assumed the company was a member of the association.

David Stanley arrived and once he started work Nick was horrified to see that his instructions had been ignored and the tree had been severely pruned back. Nick reluctantly paid £175, hoping the tree would grow back. But the tree died in 2005. Nick then called the Arboricultural Association and found out that Town and Country Tree Care were not members of the association.

Our investigation
The Rogue Traders team found a house in West London, rigged it with secret cameras, and asked our actress to invite David Stanley out to do some work. She asked him to cut down and remove three small conifer trees.

When David arrives he gives our actress the name, 'Jonathon'. He then gets to work with his gang of four, and repeatedly breaches the Health and Safety at Work Act by not wearing the correct safety equipment whilst working with the chainsaws and the chipper.

He tells our actress that he is going to poison the tree roots and they will rot straight away. However he doesn't use poison, he only uses engine oil which will do nothing to the tree roots.

He then charges our actress £180.00 to remove the trees, over double what our expert estimates the job should cost. Plus, David has his eye on the oak tree in the garden. He tells us that it's dangerous, it needs to be felled, it will fall over, and it has honey fungus in the branches. All of which is incorrect, plus honey fungus is a root disease.

He then grossly over quotes her for the work on the oak tree, and tells her that it will cost £1250.00 to fell. Our expert confirms that there is some dead wood in the tree, and David quotes £850.00 to remove that.

Another chance
We decide to give David Stanley another chance, and get a new house in West London. Our fake homeowner's 'granddaughter' is home and she is under strict instructions to ask David Stanley to remove a cherry tree with a large root.

Straight away, David says the tree root is impossible to remove. This is incorrect. He says that he will fell the tree and pour poison on the root which would make it rot straight away. Once again, his health and safety and chainsaw conduct is terrible, and he pours engine oil on the stump, claiming it is poison.

Again he charges £180.00, this time for 6 minutes' work. Our expert estimates that this is about three times the amount we should pay. When we pay for the work, once again David says his name is John, but when we booked the job he said his name was David.

He also tells us to get in contact with him again, because apparently our very well maintained garden needs some trees pruning, so we decide to invite him back again at a later date.

We do call David Stanley back round, but this time so that Matt can confront David with our allegations.

David Stanley arrives as 'Jonathon', and tells our actor that he needs to have a lot of work done in the garden at a price of £950.00. Our expert is shocked at the incredibly high price David is quoting, for work that doesn't even need doing.

Before our actor can agree to any work, Matt comes out to pose our allegations to David Stanley. Regarding the engine oil, David claims that he mixed it with SBK, a type of poison which would rot the tree roots. But our expert says the poison was not used on either of the visits.

David says that he has been working as a tree surgeon for years and he is qualified. When we asked for details of these qualifications he was unable to tell us. He then got into his van and refused to accept our letter detailing our allegations in full.

David Stanley has not responded with a formal statement.

We later completed the 'impossible' task of removing a cherry tree stump with a stump grinder in less than hour.

In 2009 there were almost 2,000 complaints to Consumer Direct about tree surgeons and gardeners. Reliable tree contractors can be found via the Arboricultural Association website under the approved contractor scheme. Alternatively, your local authority tree officer will be aware of local rogues and who is capable of good tree work. Reach them through the Directgov website.

* Rogue Trader David Stanley who operates around West London is not to be
confused with other tree surgeons with similar names.

Watch the video clips, read the stories and join in the discussions.

You can stay up to date with Watchdog via these feeds.

Send your story to Watchdog and it could feature in an upcoming programme.