All the views without the queues

I'm just back from a two day walking adventure with Derek Brockway and the Weatherman Walking team. This particular walk took us from the small coastal village of Trefin near St David's along the coast to Pwll Deri hostel, taking in the beautiful old Felin Tregwynt Mill along the way. 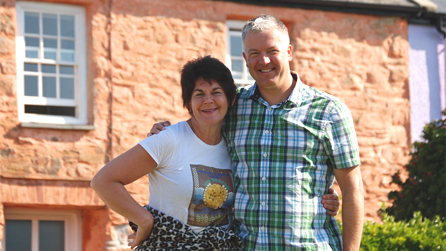 Derek and Gwenno outside a colourful house in Trefin.

For this walk we were joined by our walking guide - actress - singer - broadcaster - surfer and life coach - Gwenno Dafydd, the 'Welshiest woman in Wales' who sang and 'wiggle walked' her way along the entire 8 mile section, entertaining us all with her tall tales and songs! If you could bottle her energy I'm convinced you could power a small city from it ;)

The first leg of the walk took us through Trefin, along Fford y Felin and right, onto the coastal path, passing an old ruined mill above a pretty cove.

From there we hiked up the hill and onto the coastal path towards Abercastle - a picture postcard seaside village with colourful boats and houses hugging the hillside overlooking the bay.

All along the path here you'll find yourself looking down into pristine little coves - perfect for exploring with a sea kayak but completely inaccessible to walkers but at least the seals get some peace.

Above the hill leading down to Abercastle lies an impressive Cromlech or Neolithic burial chamber known as Carreg Samson, named after a local priest who apparently once lifted the cap stone with his little finger.

The tomb is roughly 5,000 years old and has an enormous cap stone, measuring fifteen feet in length and nine feet wide. The tomb stands a good nine feet tall too and is an impressive structure by anyone's standards and certainly the largest cromlech I've ever encountered. 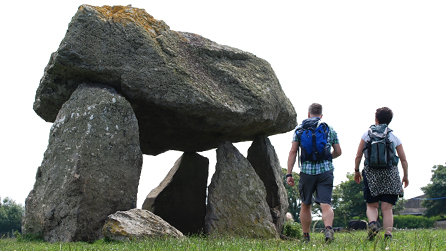 The site is also rumoured to hold around 1,000 burials so must have been a very special place for our ancient ancestors.

Alongside the tomb we bumped into some visiting art lecturers from Texas, who were busy painting and sketching the stones.

They, like most Americans, absolutely loved Wales and were enjoying the relatively cool weather (hot by our standards) having just left a drought and 100 degrees C+ temperatures back home. Meanwhile the crew were all busy getting sunburned, despite having applied the obligatory factor 50!

So, down into Abercastle we walked, heading back up the other side of the village, past an old ruined granary building and onto some spectacularly rugged coastal scenery.

Here we saw oystercatchers and gulls busily feeding in the dark sands at low tide and plenty of ringlet and meadow brown butterflies. 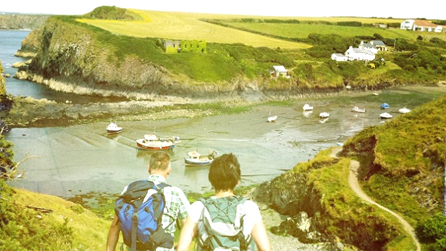 Derek and Gwenno marching down the hill towards Abercastle.

Jagged pinnacles of rock (which we likened to dinosaur teeth) rose up out of a translucent, blue ocean and we couldn't have asked for better walking weather.

Unfortunately we don't get to choose the weather when filming but it's always nice to showcase the best walks in Wales under sunny skies.

Gwennon and Derek began singing and with a warm sun on our backs we walked towards Abermawr with the sounds of Calon Lan ringing in our ears. I had ear ache that night ;)

Abermawr is a pretty, flat pebble, lined beach where we would end our first days filming. Having covered a good 5 miles, (over a whole day) we were all pleased to finally rest our feet and grab some food. 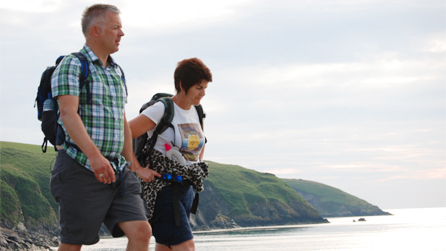 Arriving at Abermawr in the late afternoon sunlight.

Five miles over a whole day sounds absurdly simple but you have to remember that all the recording gear (tripods, cameras, batteries, tapes, food and water) has to be carried, scenes are repeatedly shot from different angles and re-shot, all of which are fairly time consuming. But whatever you're doing, spending 12 hours on your feet is always going to be pretty tiring.

We passed plenty of walkers along the way (most of which were heading to pubs!) but despite this, north Pembrokeshire is still relatively quiet - 'all the views without the queues' is how I summed it up i.e. you don't get the tourist traffic found in the south at Tenby, Stackpole Quay and Barafundle etc.

The scenery in the north is also much more striking but you don't get the same golden sands, found in the south unless you venture south to Whitesands or Newgale.

We'd all seen the weather forecast and knew the following day would bring wind and rain. I awoke to the sound of weather battering my window and peered out into the dense rain and sea mist, remembering I'd forgotten to pack my waterproof trousers...

We ate breakfast a little slower, hoping for the weather front to pass over us and visited Felin Tregwynt Mill for some indoor filming. As luck would have it, the sun began to break through and by 11am, we were seeing blue skies peeking through the cumulus clouds above. 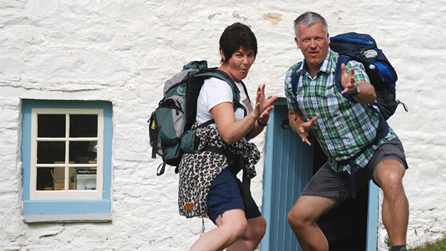 Derek and Gwenno striking a pose outside the mill.

The mill was a fascinating place and dates from the 18th century. Nowadays the much sought after woollen products and tapestries are sold all over the world and fetch a high price at market, so if you're passing, pop into the shop and take a look at the lovingly crafted goods.

Back to the walk now, as we picked up where we'd left off from at Abermawr and walked across the neighbouring bay of Aberbach beach - famed for its smuggling antics.

The wind was breezy but the sun was doing its best to stay with us, so we plodded on, hiking up and down the various stone escarpments that stood in our way.

Our next stop was Pwll Crochan with it's steep sea cliffs and coves and I spotted the tell tale signs of a peregrine falcon - a clump of pigeon feathers left at the base of the cliff. From here we skirted the cliff edge and walked up and down the trail towards our final destination - Pwll Deri.

It's hard to describe coastal views, as they do tend to look very similar and you can only use the words 'stunning' and 'spectacular' so many times, but nothing else seems appropriate? It was stunning. 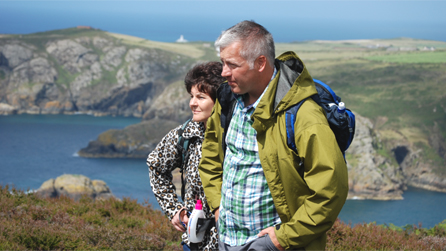 The last mile, seemed to take forever, probably because we could actually see the end in sight but the views along this last stretch were probably the best we saw on the entire walk - with scattered islands below, vast green hillsides and cliff tops above and Strumble Head lighthouse shining brightly in the distance.

Meanwhile the sculpted crags of Garn Fawr, Garn Fach and Garn Gilfach stood guard over proceedings, quietly watching and waiting for our arrival. The last rays of sunshine fizzled into the sea as we arrived at the Pwll Deri youth hostel, which has to have one of the best views of any hostel in Britain and we shot our final scenes.

It had been a great two days and once again we'd managed to dodge the rain. Another walk in the bag, with two more left to do in August.

Welcome to the BBC Wales Nature & Outdoors blog, where you can discover all sorts of things to see and do around Wales. From wildlife and walks to the latest weather updates, we'll also bring you the latest news and views from the field.

BBC Wales weatherman, Derek Brockway blogs about the weather, his weatherman walking exploits around Wales and all things meteorological. He'll also feature your best weather photos from time to time.

Martin Aaron, our nature & outdoors Producer, was born on a stormy night in the Irish sea and raised by dolphins. He blogs about wildlife, the landscape, surfing and outdoor life in Wales.

If you have an interesting nature related story or photo you'd like us to feature, please get in touch.

Email alerts - Receive all blog entries straight to your inbox:
Subscribe to all nature posts via email

You can stay up to date with Wales Nature via these feeds.