Last week most of Wales enjoyed a taste of summer.

At the Royal Welsh Show attendance records were broken and on Thursday in Cardiff the temperature soared to 28 Celsius making it the hottest day of the year so far in the capital.

Since then it has turned cooler and fresher with lower humidity. Daytime temperatures this week between16 to 21 Celsius, 61 to 70 Fahrenheit, which is around average or a little below.

Low pressure near Ireland will also bring us some rain and fresh to strong winds but good news for our wave starved surfers this summer.

Thursday and Friday will be brighter with a mixture of sunshine and scattered showers.

The air will be unstable so the showers could be heavy in places with hail and thunder.

The weekend will continue rather cool and changeable with showers and sunny spells.

So not the best of summer weather this week but at least the pollen count will be low! 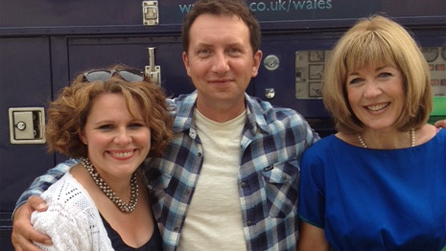 Well that's it for another year, I've just finished recording the end link with Sara and Rachel, and am now ready to step down from my presenter duties for the Royal Welsh show 2012.

We've had a marvellous time but happy to be on our way for dinner as once again we didn't have time for lunch.

Looking back over the week it's hard to pinpoint single highlights as the whole show has been the most amazing experience.

For me the kindness of the Davies family allowing me to help prepare their champion dairy cows during an incredibly stressful time must top my highlight of my show.

We have all had an amazing time and I hope you have enjoyed watching.

A change on the way this weekend

It's a game of two halves weather-wise in Wales today: the south, the east and the Royal Welsh Show have been hot and sunny but it's a different story in the north and west where it's cloudy and cooler.

In Aberporth, there is some fog on the coast with a temperature of 16 Celsius, while in Monmouth the temperature should reach a humid 27C 81F.

The first of the Olympic football matches have been played in very warm conditions in Cardiff, but there is a change on the way.

Over the next few days, it's going to turn cooler and fresher everywhere with a mixture of sunshine, cloud and showers.

On Sunday, the showers could be heavy in places with thunder. Daytime temperatures will range between 15 to 19 Celsius and with lower humidity it will be more comfortable at night for sleeping.

Next week looks more unsettled with some rain on the way with temperatures around the seasonal norm or a little below.

So, after the hottest spell of the summer so far in mid, south and east Wales, temperatures are set to drop.

However, the north and west, which have missed out on the hot weather, will enjoy a few sunny spells.

Welcome to the BBC Wales Nature & Outdoors blog, where you can discover all sorts of things to see and do around Wales. From wildlife and walks to the latest weather updates, we'll also bring you the latest news and views from the field.

BBC Wales weatherman, Derek Brockway blogs about the weather, his weatherman walking exploits around Wales and all things meteorological. He'll also feature your best weather photos from time to time.

Martin Aaron, our nature & outdoors Producer, was born on a stormy night in the Irish sea and raised by dolphins. He blogs about wildlife, the landscape, surfing and outdoor life in Wales.

If you have an interesting nature related story or photo you'd like us to feature, please get in touch.

Email alerts - Receive all blog entries straight to your inbox:
Subscribe to all nature posts via email

You can stay up to date with Wales Nature via these feeds.

The bad weather this summer has had a negative affect on the UK swift population, mentioned in a recent article on BBC News. This follows on from a recent RSPB report which mentions that the population of swifts visiting the...

Dr Rhys Jones, co-presenter of Royal Welsh Show highlights on BBC Two Wales, blogs specially for BBC Wales Nature this week. It's simply been the hottest Royal Welsh Show I can ever remember! Standing up to two hours at a...

Dr Rhys Jones, co-presenter of Royal Welsh Show highlights on BBC Two Wales, blogs specially for BBC Wales Nature this week. I am having an amazing time at the Royal Welsh Show show this year. I have to give a...

The latest from Llanelwedd

It's a glorious day at the Royal Welsh Show with hardly a cloud in the sky and unbroken sunshine. Temperatures this afternoon soared to 26 Celsius, 79 Fahrenheit in the shade, making it the hottest day at the show since...