You might know Steve Balsamo from The Storys, or from his solo work, or you might know him from his turn as the titular character of Jesus Christ Superstar in the 1990s, but the Swansea man has turned his hand to another interesting role.

This time, he's been writing with sometime Storys member and solo artist Rosalie Deighton for a forthcoming album of "folk/country/Americana" songs. 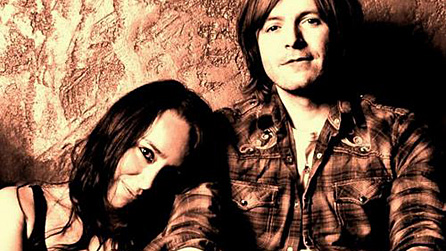 Balsamo And Deighton have their début single out this week (29 July) on his own Ghost Horse Records, with the album following in 2013.

"Rosalie and I met over 10 years ago at Swedish producer Martin Terefe's studio in Kensal Road in London," says Steve. "Martin went on to work with Jason Mraz and James Morrison and won a Grammy with Train. He co-produced Rosie's début album Truth Drug and co-produced my solo album All I Am.

"I loved her voice and she mine, and we said we'd make an album down the line. When The Storys were touring a lot, we asked Rosalie to come support us, and when Dai Smith decided to leave, we asked her to join the band.

"Dai is such a great player, writer and personality we thought a woman who is all those things would bring a different angle to the band. Rosalie joined us writing and recording Luck, The Storys' third album."

Rosalie's folk background took her into a career with her own family, aptly named The Deighton Family. They toured worldwide and, solo, had a deal with Independiente Records around a decade ago for Truth Drug. Her second set, 21 Days, came out in 2007.

She is also a member of Danny And The Champions Of The World.

How do Steve and Rosalie regard their duets project? "We're both very excited with the project! Our voices blend beautifully and we've been quietly writing for a couple of years.

"We started writing and making demos with Julian Wilson of Grand Drive and have started the album with John Reynolds (Sinead O'Connor, Indigo Girls, U2). We have a few co-writes with some tasty people, inculding Boo Hewedine, Andy Collins (ex-Storys) and hit songwriter Steve Booker who wrote Mercy with Duffy.

"We have a bunch of great songs that we're working through for the album and are both loving the results so far."

The pair's long careers have meant they can call on some respected musicians. For example, there's a guitarist working with them called Robbie McIntosh. "He's played with Paul McCartney, John Mayer and Norah Jones," says Steve. "He has played some stunning guitar... and Steve White - ex of Paul Weller's band - came played on the single. I met Steve while touring with the late, very great Jon Lord."

Steve believes Balsamo And Deighton's sound won't come as a surprise to fans of their previous work, and sees it as a development rather than a revolution:

"I think the sound is a lovely complement to The Storys' sound," he says. "We both adore country and folk and the 'West Coast' sound that we were making with The Storys. But this time we're (soul) mining and taking cues from Emmylou Harris, Robert Plant and Alison Krauss' Raising Sand and other songwriters we love like Jackson Browne and Ron Sexsmith.

"We have, in fact, tried out a few covers by them that sound beautiful. It's similar territory to before but also looking at bluegrass dude Ricky Skaggs and the new bluegrass dudes on the block/prairie/porch The Punch Brothers.

"All of this, however, is through the filter of Barnsley and Swansea! I think there's an interesting story to tell of both these cities, both steeped in music albeit one rock and the other folk... but that's for later."

There is even talk of ex-Led Zeppelin man Robert Plant joining the duo on a track, plus his Band Of Joy partner Patty Griffin too.

I Don't Know Why, originally by Shawn Colvin, "has been haunting both of us for years" says Steve. "We've both encountered her and the tune on many occasions. The video - filmed by brilliant director/film writer Kamma Pastoll - has been in the works for 10 years and seemed that now was the time to realise it.

"It has turned out better that we all could have imagined and really has focused us to finish the album and get out and tour."

"Making a video first may seem like a backward way of doing things, but I really think these days songs/films have a life of their own online and we wanted to test if that theory is right.

"Social networking provides the modern artist with a way of getting to a large audience, as long as what you make is good!"

Concluding our chat, he says: "The album will, I think, be beautiful, sad (for the most part) with some reflective songs. We have been trying to write a little faster, but at the moment what's occurring is something between Emmylou's Wrecking Ball album, Plant/Krauss' Raising Sand with a little Bruce Springsteen and Tom Petty thrown in. Big shoes then!"