If you were born in 1976, there's a good chance that Save Your Kisses For Me topped the charts at the time. The summer of drought, water bowsers and sunburn was also the summer of Brotherhood Of Man - Eurovision winners and chart superstars.

Brotherhood Of Man's Nicky Stevens of Carmarthen is to this day the sole Welsh person ever to have won Eurovision. She told us about her involvement with the competition all those years ago. 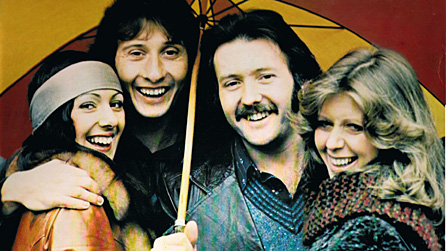 Looking back to 1976, what were your thoughts about Eurovision as a whole? Did it have a place for acts really trying to make a career?

"In 1976 Eurovision was a tremendously prestigious contest to take part in, especially if you won. Of course it was a great place for acts to be seen who were trying to further their career; it still is a great 'shop window' for performers as, after all, it goes out to numerous countries accumulating millions of viewers.

"Also, let's not forget it really is a song contest. It opens many doors for the songwriters. Their product gets heard and hopefully recorded by successful recording artistes. There is no cheque as a prize, it's the prestige and high acclaim that one receives and any successful career move that results from it.

"I remember sitting at home in Carmarthen watching the New Seekers on the contest and thinking wouldn't it be marvellous to win something like that. Little did I realise what was to come. I never dreamed in a million years that one day I would be a winner." 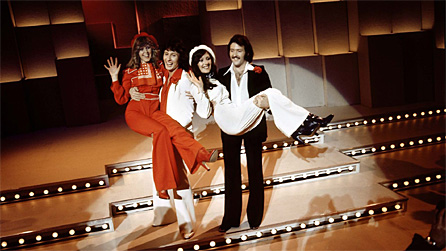 What would say was the effect of your win on your career?

"The contest for us had the most marvellous effect on our career. Save Your Kisses For Me went on to be number one in 33 different countries. For us it could not have been any better.

"The year that we won saw a new concept introduced. The songwriters for the first time were able to choose the artist that they wished to perform the song. Our song-writing team of Hiller, Lee and Sheridan obviously chose Brotherhood Of Man as Hiller was our manager and Lee and Sheridan were two of the group members!

"The song eventually sold six million copies worldwide and is still the highest selling Eurovision winner ever. It earned us a platinum disc and ended up the top selling single of 1976, and is currently one of the top 100 selling songs in the UK.

"After Kisses, we continued with several hit records worldwide, travelling the world performing in concert and numerous television appearances. We have been privileged to meet and perform in front of many of the worlds greatest dignitaries, including our own Royal Family and appeared at some of the world's most prestigious venues.

"Due to our success of winning the Eurovision, we still perform internationally in concert and television and we are now celebrating our 40th year together and still the same four original line up. So, for Brotherhood Of Man, a performance of a three minute song in 1976 at the Hague in Holland changed our lives forever." 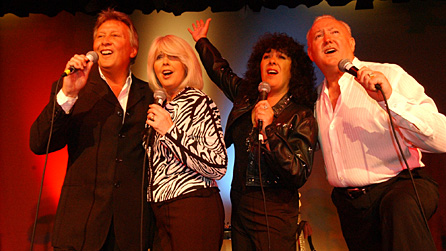 As the only Welsh artist to have ever won the contest, do you have a sense of pride in representing 'the land of song' at such a high level?

"As the only Welsh artist to ever win the Eurovision contest, it goes without saying that I am so proud to have represented Wales at such a high level. I remember so well how exited the townsfolk of Carmarthen were and the numerous cards and telegrams that I received. The art master, Terry Johns, of Carmarthen Grammar School had designed and made good luck pendants for each of us. We had them in our pockets as we performed the song. That's the Welsh for you - and yes, there is always a welcome in the hillside when I go home."

You guys must have attracted groupies and engaged in all sorts of high-jinks... or not? Is the idea of the big 70s band a bit of a myth?

"The 1970s produced many bands with many different personalities, shall we say. Yes of course we had our regular followers, some are still following us now and bring their children to see us, would you believe.

"As a group back then, we would do our fair share of partying; we were young but we were a very clean-living group and were always devoid of any scandal. Not one of us were ever involved in the drugs scene and when we were not working we would be with our family and friends.

"Most of our friends were outside the business so we were never part of the London scene mixing with people of similar success. It goes without saying the boys had their female admirers and Sandra and I had male ones, but they were always just admirers as we were all in stable relationships."

Looking at Eurovision now, do you think it has the same appeal for acts and audiences?

"For some, the contest is still as appealing and for others not. We still perform in other European countries, sometimes performing on their Song For Europe; this year we performed on the Irish one in Dublin where Jedward were chosen again. I do find that other countries are far more enthusiastic than the UK.

"When we won. there were only 18 countries entering. Now there is an elimination contest as well as the major one. It still has the appeal for acts and even though I speak to people who feel that it has lost its appeal, I find that they still watch it. The media still show the same interest as this time of year we find ourselves doing numerous radio and television interviews."

Lastly, what do you make of the camp take on the contest that Terry Wogan and subsequent presenters have driven? Is that the right way in which to view the contest?

"The camp take on the contest can be funny and sometimes not. I think it depends on one's sense of humour and seriousness. Wogan got on my nerves many a time but other times I had to laugh.

"However, one year we were performing in Copenhagen and watched the contest there. I really enjoyed it more because if the commentator was throwing quips around. We did not understand the language and I must say I found it refreshing!"