It was back in 2009 when we first worked with Thomas Søndergård. Our principal conductor, Thierry Fischer, had suddenly taken ill and Søndergård entered the fray last minute to conduct a programme of Sibelius, Mahler, and Brahms. His pleasant manner, efficient, yet in-depth rehearsal technique and obvious passion for the music, left an immediate and lasting impression on us.

As we were already aware that Thierry would be leaving us at the end of the 2011/2012 season, the great and infamous orchestral rumour mill was rolling before Søndergård had even left the studio - could he be the one for us?

Fast forward to Monday 11 July 2011: Thomas is with us to perform a programme of Sibelius, Dvorák and Prokofiev (with the fabulous Baiba Skride). Now, management may have tried to keep it a secret from us all, like a surprise gift at Christmas, but the plethora of cameras and official people in the studio pretty much gave the game away that an announcement of exciting proportions was about to be made. There were very wide smiles abounding in the studio (unusually for a Monday morning) as Thomas was announced as our new principal conductor. 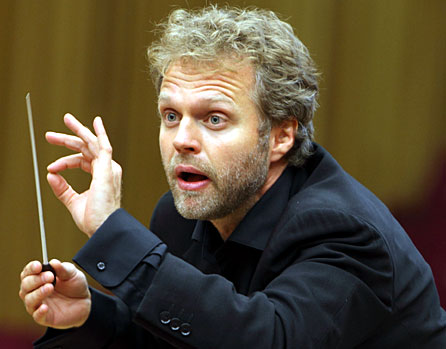 Thomas Søndergård in rehearsal with the BBC National Orchestra of Wales, Monday 11 July 2011

With that, it was straight into rehearsal. I won't bore you all with the technical details of the rehearsal, but what came across, as did the first time we worked with him, was a great sense of musicality; a love for telling the story of the music, rather than just getting from A to B in the score. Tonight's concert is one not to miss.

I really do believe this to be a very exciting time for our band. Over the past year, we have won a BBC Music Magazine Award for David Matthews Symphonies 2 & 6 (with Jac van Steen) and were nominated for a Grammy for our recording of Sullivan's Ivanhoe. We have recently had a number of fantastic new appointments in key playing positions within the orchestra, bringing fresh blood and enthusiasm with them.

Mark Bowden, a former RPS Composition Prize winner, has just been announced as our new resident composer (in addition to his role as the Rambert Dance Company Music Fellow) and will be joining Simon Holt on our in-house composition team. The addition of Thomas Søndergård to our already established conducting team of Tadaaki Otaka, François-Xavier Roth and Jac van Steen, reinforces the feeling of exciting times ahead. 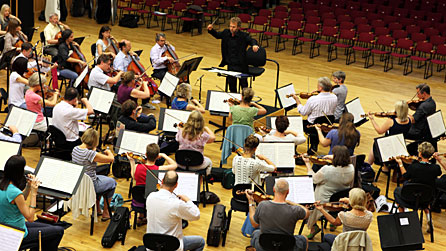 Thomas Søndergård in rehearsal with the BBC National Orchestra of Wales, Monday 11 July 2011

With Thomas Søndergård we can continue, in the words of Alex Ross in his book Listen To This, to work as an "individual and an institution bringing out unforeseen capabilities in each other".

Laura Sinnerton is a viola player in the BBC National Orchestra of Wales.