John Sicolo, founder and owner of TJ's nightclub in Newport, died yesterday at the age of 66. The ebullient, effervescent former Merchant Navy cook had run the venue on Clarence Place since 1971. 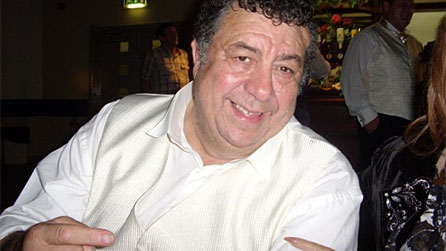 His death quickly made news in the blogosphere and was for a while the UK's top trending topic on Twitter; a Facebook group remembering John has been set up and many hundreds of people have been sharing their memories of the man and the venue.

Newport MP Paul Flynn, well known for his interest in his city's music scene, wrote on his blog, "He was the owner and inspiration for the city's legendary 'TJ's'. The rock club gave Newport fame, excitement and musical chutzpah. It was TJ's that won for Newport the title of New Seattle. A generation of Newportonians relished the buzz of hearing top World groups on their own doorstep. They fondly remember TJ's at its thrilling best, robust, loud and bursting with talent."

On the Facebook group, Jonathan Hodson said: "Rum and black, rock and roll, a voice of gravel and honey, many bone-crushing handshakes... passion at the injustices and apathies in the world, but with a great sense of humour and a laugh Sid James would have killed for" while Jess Needs wrote simply: "RIP John. Thanks for some great memories. I won't forget your face, it was all I saw every Friday and Saturday night through my teenage years! You were a lovely man and will be missed by many."

On Twitter, hundreds of messages and memories have been posted. John Robb, journalist and frontman of Gold Blade said, "RIP John Sicolo... the legendary promoter and top bloke that ran Newport TJ's - best live venue in the UK for years..."

On southwalesmassive.com, a forum centred around the area's punk rock scene, a message read: "He sure was a lovely bloke, at least to me, even though he only knew me as just another punter, he always had time to chat or say hi and was always friendly; qualities a lot of people could learn from."

In a message sent to us here at BBC Wales Music, Kirstyn Williams said: "I remember once when it was closing time on a weeknight in the bar, Godfather III was on television so John plonked his chair right in front of the massive screen and avidly watched it, frequently telling me to shush as I was being a tad drunkenly loud. It might not sound like an important memory, but these are the memories I will remember. He was such a funny and caring uncle-type. He will be greatly missed."

Touring bands took full advantage of John's (and Trilby's) hospitality, not to mention his cookery skills. In her book Petal Power, Laurie Lindeen of Zuzu's Petals wrote, "In Newport, Wales, we were taken to the bar owner's home for dinner. Our host looks like a shorter, older Tom Jones, and I have no idea why a grown man with a family would have the likes of us home for dinner.

"But it's instantly apparent that he's a kind, happy person; his wife is loud and friendly, calling attention to the 'knickers' hanging out under our skirts with cackles of amusement. The host family is teasing and laughing and hugging and kissing, and asking lots of questions. It's their pleasure and and duty to give us a meal in their home simply because we're American kids seeking our fortunes. To me they've just defined the real meaning of 'home'."

In 1971, John bought two adjoining properties and created El Sieco's, an American-style steak and seafood restaurant. He eventually renamed it TJ's Disco, combining his initial with that of Trilby, his late wife, and concentrated on music.

The venue - starting with with some local shows in mid-1980s - would become one of the most well-known places for British and international touring bands to play. Green Day, Mudhoney, Hole, Fugazi, Therapy?, Oasis, The Bluetones, Supergrass, Catatonia, Super Furry Animals, Manic Street Preachers and 60ft Dolls all played, reflecting TJ's pre-eminence as music scenes such as grunge, Britpop and 'Cool Cymru' swept through the nation's musical consciousness.

I interviewed John in 2002 for my Welsh music fanzine of the time. He was the master of playing up the reputation of TJ's, helped in no small part by the epithet 'Legendary' that John Peel applied to the venue. He blended fact and fiction with gay abandon for the greater glory of his life's passion. He recalled his first exposure to the type of music with which TJ's would become synonymous, when local promoter Simon Phillips asked to put some bands on: "I asked him what kind of bands they were and Simon told me they were punk. Now, I wasn't too fussed either way about punk; I didn't know a lot about music really as I spent most of my time in the kitchens, so when I came to see those bands and they started slamming, I froze in horror and thought 'what have I let myself in for?'.

"But after a couple of minutes I could see that this dancing wasn't violent at all - it was just fun. Every time someone fell over, the rest rushed to pick them up. It was a fantastic night; it was history and I really enjoyed it. That was when my late wife and I decided that we would now cater for original bands."

His cooking and his philosophy for only working with promoters of good standing made him friends: "Equally as important is having promoters who don't rip off bands," he told me. "All the people who have put on gigs at TJ's haven't been doing it to make money, but because they love the music. It's why bands like Green Day wanted to come here when their label wanted them to play somewhere bigger."

A larger-than-life character with a personality to match, this half-Welsh, half-Seychellian rumbling giant of a man was genuinely engaging and effortlessly personable though with a no-nonsense attitude that held no truck with egos. With a practised ease, he told me the story of his encounter with Kurt Cobain.

"Courtney Love's band, Hole, were playing and were soundchecking just before the doors opened, when this blond, straggly-haired geezer came up to the door. I said to him 'If you're coming in, it'll be £3.' He said to me, 'No man, I'm here to see you Courtney; you see my accent?' I told him again it was three quid when Simon Phillips came rushing over going, 'No, no it's all right John, it's Kurt Cobain!' How was I supposed to know? I didn't know who he was!"

Do you have any memories of John Sicolo or TJ's? Please share them below.