Half a century ago the future of transport appeared on a beach in north Wales. The hovercraft service from Rhyl to Moreton beach, Merseyside - the first of its kind in the world - was unleashed to masses of enthralled onlookers. This was the way forward - or so it seemed. 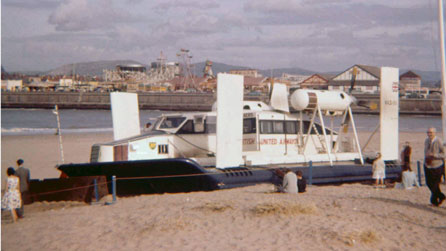 On 20 July 1962 a large crowd gathered on Rhyl beach and marveled as the newly developed Vickers VA3 hovercraft, or hovercoach, as it powered up its two roaring engines. The machine signalled a new chapter in the future of transport, making sci-fi dreams reality.

The hovercraft was a huge technological leap forward. As it was being developed in the 1950s the Patent Office was unsure whether to class it as aircraft or boat. Prior to this, various attempts were made to build a craft capable of traversing land, water and anything in between, using a cushion of air and a skirt that lifted the craft above the terrain. In 1959 a hovercraft crossed the English Channel and, like the recent advances in jet-engine technology, enthusiasm was huge. 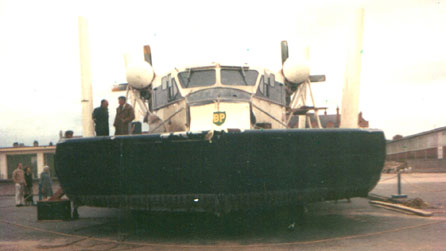 Half a century ago, traversing the Dee Estuary took over two hours by road. The new hovercoach could, it was claimed, carry 24 passengers at up to 70mph, taking 30 minutes with a scheduled 12 trips per day. The journey cost £2 for a return ticket, with a 20 minute turnaround. It was on an overcast August morning the first two dozen passengers made history, encountering a bumpy crossing to the then bustling seaside town of Rhyl.

Weighing in at 12 tons and spanning 54 feet in length and 27 feet in breadth, the Vickers-Armstrong VA3, run by British United Airways, was one of the first commercially viable hovercrafts rolled out for use. From the summer of 1962 it was constantly at the mercy of the weather, operating for just 19 days out of a scheduled 54 and only managing the proposed dozen trips on two of those days.

Ultimately it was the elements that proved the end of this innovative service. On the afternoon of 14 September the VA3 left the Wirral shore to head for Rhyl, and halfway across the 17 mile journey one of the lift engines failed, soon followed by the second. Eventually the craft made its way to Rhyl. For the next three days, the three captains, along with other helpers frantically attempted to moor the craft, but despite limited success the craft broke free and drifted nearly half a mile out to sea.

Brian Whitehead remembers the fateful few days that brought the curtain down on the world's first passenger hovercraft. "I well remember that night in September 1962, a friend and I were returning home from Prestatyn when we saw the maroons go up at Rhyl lifeboat station.

"We decided to drive the car on to the prom by the lifeboat station and were waved by some of the crew to follow them and drive along the prom shining our headlights to where the hovercraft was slamming into the sea wall. When they had finished lashing it to the prom railings, we were thanked and we left. The next day we read about the incident, stating that there was hundreds of gallons of kerosene on board!" 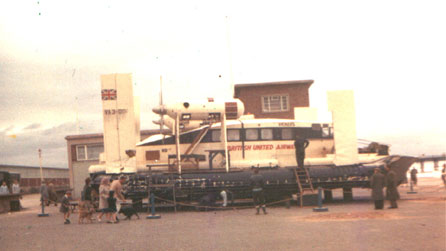 In the hands of the gales and tides of the Irish Sea, the VA3 was smashed into Rhyl's promenade wall, followed by a further pounding from the waves and a heroic intervention from the Rhyl lifeboat crew.

The ordeal signalled a premature end to the world's first passenger hovercraft service. The accident happened a few days before the service's trial period was up, and signalled an end to the prospect of gliding over the waves for the people of Rhyl.