The ruins of Strata Florida Abbey lie close to the Ceredigion town of Tregaron, deep in rural solemnity and with almost no hint of the importance the place once held. 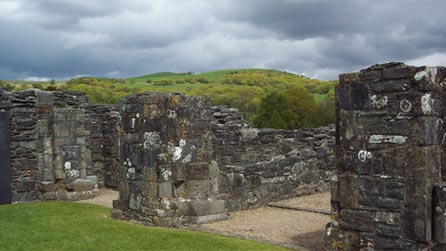 Little remains of what was once a huge and famous place of worship but there is just enough to enable visitors to feel the presence of a long-gone world and way of life. And with excavation still continuing, who knows what may yet be uncovered?

The abbey - Ystrad Fflw in Welsh - was founded in 1164, and the abbey church was consecrated in 1201. The name is a derivation of the Welsh, meaning valley of flowers and of a nearby river, the Fflwr.

Founded by monks from Whitland Abbey to the south east, this was a Cistercian House, established when the so-called White Monks were rapidly establishing their power base. The abbey initially came under the patronage of the earls of Pembroke but in the 13th century control passed into the hands of the owners of nearby Dinefwr Castle. As such, the famous Lord Rhys was one of the main patrons of the abbey.

The Cistercians were a wealthy order and they quickly acquired farms or holdings - granges as they were known - across the immediate area. These served to bring in extra wealth to what was rapidly becoming a major ecclesiastical site.

So important was the abbey at Strata Florida that Llywelyn ap Iorwerth - Llywelyn the Great as he was known - held a council of Welsh princes here, persuading them to acknowledge his son Dafydd as their rightful leader. Of course, once Llywelyn was dead, the princes simply reneged and started quarreling amongst themselves again. It was simply the fact that Llywelyn had chosen to bring them all to Strata Florida that made the occasion - and the place - special.

Strata Florida was a military base for King Henry IV during the Owain Glyndwr rebellion; the king expelled any monks who had supported Glyndwr. He then proceeded to plunder the abbey. It was again a military base during campaigns against the Welsh in 1407 and 1415.

Strata Florida, like the other abbeys and monasteries of Britain, suffered during Henry VIII's dissolution of the monasteries, and was dissolved in the 1540s. The refectory and dormitory were converted into a gentleman's house and much of the stone from the other buildings was taken away by local farmers and land owners.

The abbey lay, largely forgotten, until the coming of the railway in the 19th century. Then, in what was really an early tourist boom, people flocked to see the ruins and Strata Florida began what was, literally, a second life.

By then, of course, it was in a pretty disheveled state. The only substantial structure was the Great West Door to the abbey church but there were enough low walls left intact for people to gain some idea of what the place had once looked like. A series of medieval tiles, complete with decoration, was always popular with visitors, the most famous of these showing a man preening himself and studying his reflection in a mirror - vanity, it seemed, was not just a modern invention.

These days the ruins are overseen by Cadw and while there is still an archaeological dig going on, the graveyard is also still operational. Many people opt to be buried in close proximity to the 11 princes of Dinefwr who are also buried here and, of course, to the remains of the famous Welsh poet Dafydd ap Gwily, which also lie in the graveyard.

According to legend, Dafydd ap Gwilym is buried under a famous oak tree in the graveyard. The tree has withstood tempest and storm, even being hit by lightning on several occasions. Dafydd ap Gwilym sleeps on, regardless.

In its day, Strata Florida was a famous place of religion and learning. The Brut y Tywysogion, one of the earliest works of Welsh history, was said to have been compiled there, presumably by one of the abbey monks. Now, the abbey lies desolate and abandoned in a sleepy and quiet part of Wales, its peaceful nature totally belying the immensity of its history.