Back in April 2012 I received an email from a lady called Kathy in Newport, after appearing on BBC Radio Wales' Jamie & Louise programme.

Kathy and her husband Stuart met in Singapore in the 1950s. She was stationed there while working as a telephonist in the WRAF and he was in the RAF. Kathleen Dymond and Stuart MacKay married at Changi in 1959 and their bridesmaid was Kathy's best friend Twylia Worlund. 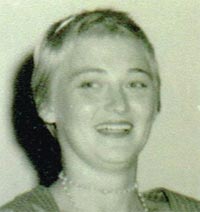 Twylia was an American working in the naval department at the American Embassy. Kathy and Stuart haven't seen or heard from her in over 50 years. As time has passed, address books were lost and different continents crossed.

Kathy looked upon Twylia as a sister and was very keen to find out what had happened to her, which is why she asked me for help.

Kathy thought Twylia was the same age as her, so born around 1937. She might have been from a small town, in either Wisconsin or Minnesota, and her first name may have been of Welsh origin. But Kathy quickly added that they were far too busy having fun at the time to talk about home or their families!

As usual I leapt at the chance, simply assuming that it would be easy with such an unusual name, even though Kathy wasn't too sure about the correct spelling of Worlund.

How wrong could I be?

Worldwide access on ancestry.co.uk did not throw up any immediately obvious candidates, which can often be the case with American research if you don't know the state and other more specific details. There was also nothing on the family trees posted online or on Genes Reunited.

I did find a Twylia Dailey who died in Winsconsin in 1998, but she was born in 1973, which was far too young for our Twylia.

So I turned to Google for help and quickly found two very relevant and helpful organisations.

First I sent an email to the RAF Changi Association. Alongside their email addresses and rank and trade, they had very helpfully given the dates of when they were based at Changi and I could see that several of the key members had been stationed there between 1957 and 1959, which fitted perfectly with Kathy and Stuart's dates.

Their reply was instant and positive: "This is what the RAF Changi Association is all about, trying to connect old comrades with one another, bringing them together and others with reunions," they said.

They agreed to post some photos that Kathy had sent me of her 21st birthday held at Changi RAF base in 1958. 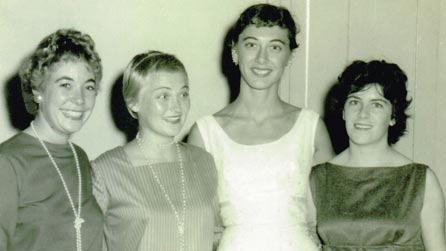 Memories of Singapore organisation offered a similar service and so I jumped at the chance to spread the search for Twylia further. Their site contains many photographs and images contributed by people who lived in Singapore during the 1960s and early 70s, including a section on RAF Changi.

But I still can't for the life of me find Twylia and I need help.

Perhaps you recognise the other people in the photographs and maybe, just maybe, they can lead us to Twylia. 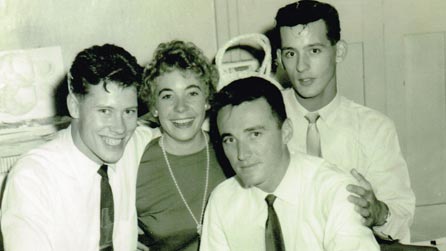 Left to right : Ronald M Mitchell AKA "Mitch", Kathy, "Mo" Mosely and Stuart Mackay. Mo & Mitch were part of the security guard detail at the US Consulate.

Please contact me if you know where Twylia is now or if you think you can help in any way.

Cat will be joining Jamie and Louise on BBC Radio Wales on Tuesday 24 July 2012 from 9am.