The town of Porthcawl on the Glamorganshire coast seems to be a sleepy little seaside resort. But in its prime the place was first a centre for the export of agricultural and industrial products and, later, one of the premier holiday destinations in south Wales.

The town that we see today sits on a low limestone headland, almost exactly midway between Cardiff and Swansea. With its first population hub based on Newton, half a mile inland from the sea, Porthcawl itself began life as a centre for the export of surplus agricultural goods from the rich and fertile Vale of Glamorgan. 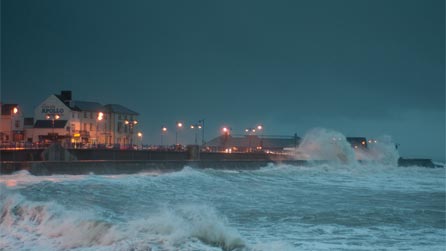 The town of Porthcawl may be relatively modern but the surrounding area has always been well populated.

The lost town of Kenfig

Kenfig lay just to the northwest of modern Porthcawl and, in medieval times, was a significant centre of population until it was overwhelmed by encroaching sand in the early 15th century. Newton is an ancient community - the church boasts a pulpit that pre-dates the Reformation and, with a series of wooden carvings showing the flagellation of Christ, is a remarkable piece of religious furniture.

In the late 1820s and early 1830s, as the Industrial Revolution began to make serious inroads into Welsh rural life, Porthcawl Point became the terminus of a horse-drawn tramroad bringing iron and coal down from the Llynfi Valley.

The trade was never as heavy or as intense as that from the Rhondda Valleys and Porthcawl was never likely to rival nearby Cardiff as a port, but it was a significant development and, for a while, it looked as if industrial prosperity had come to this part of the world.

With a view to exploiting this coal and iron trade, Porthcawl docks were opened in 1865. This stretch of coast, however, has always been notorious for bad weather and it quickly transpired that the harbour basin was very difficult to enter whenever the weather was rough.

The dock laboured on for a while but, with superior competition from nearby Cardiff, Barry and Swansea, eventually closed in 1907. All that now remains of Porthcawl's industrial past are the huge breakwater, a lighthouse and the tidal basin itself. Jennings warehouse - the oldest example of a maritime warehouse in Wales - has also survived although, at the moment, it stands empty and forlorn.

The lighthouse on the end of the breakwater or pier was the last coal and gas fired lighthouse in the United Kingdom. Operating on North Sea gas from 1974, it was only finally converted to electricity in 1997.

Porthcawl had always harboured designs as a 'watering place' and as the industrial element of the town's role declined so the tourist trade began to grow. In the early days most of the tourists were day trippers as paid holidays and long periods of free time for men in the mining industry were rare. Charabancs thronged Porthcawl's roads and there was even a railway line, a spur off the Great Western Railway, bringing people from Pyle to the sea.

After World War One, however, things began to change. Men had fought for a better life, thousands had made the supreme sacrifice, and the delights of a few days at places like Barry and Porthcawl was not too much to ask for - was it? By 1921 the population of Porthcawl had risen to 6,642 and, each summer, thousands of people from the valleys flocked in to enjoy the benefits of sun, sand and water.

The elegant promenade had been built in 1887 to commemorate the Golden Jubilee of Queen Victoria, but with the popularity of the town as a holiday resort growing every year it was clear that some form of entertainment centre was required. As a consequence the grand pavilion was built on the sea front in 1932 for a cost of £25,000. It has remained a centre for concerts, dances and recitals ever since.

Paul Robeson once performed there - via a trans Atlantic telephone link - and between 1948 and 2001 the place was the home of the annual South Wales Miners Eisteddfod.

The beach in the centre of town has always been dangerous and swimming was never really possible. However, Porthcawl was luckily flanked by two superb stretches of sand, Trecco Bay in the east, Rest Bay in the west. Close to Trecco Bay, at Coney Beach, one of Wales' great holiday institutions quickly developed - the Coney Beach Funfair. The attraction at Rest Bay was rather more sedate and decorous - Royal Porthcawl Golf Club, one of the greatest and most prestigious courses in Britain.

With the advent of Miners' fortnight in the years after World War Two - two weeks in July and August when the mines shut and virtually the whole population of the mining valleys decamped to the seaside - Porthcawl suddenly mushroomed into one of the most popular holiday resorts in the country.

The fixed caravans of Trecco Bay Caravan Park offered cheap accommodation. The Coney Beach Funfair was close at hand and with the town of Porthcawl providing the usual array of fish and chip shops, ice cream parlours and pubs, everything you could want was available within the radius of a few short miles.

It was all too good to last. The 1970s and 80s saw a decline which, although not terminal, certainly mirrored the demise of other British seaside resorts in the face of continental competition. Guest houses closed and even the paddle steamers of the White Funnel Fleet - which had for many years been regular callers at Porthcawl breakwater - were finally laid-up for scrapping.

People still come to Trecco Bay for their annual holiday but Porthcawl these days seems to cater mainly for day trippers - something of a throw back to the charabanc trips of the early 20th century, in the days before paid holidays became the norm.

While there may be an air of faded greatness about the place, there is also a sense of vibrancy and excitement. Porthcawl, like many seaside resorts, looks to the future with hope and expectation.