One story that sticks in my mind from the vast number we covered for Look Up Your Genes with BBC Radio Wales was that of Kristina Taylor.

Kristina's search concerned her maternal grandfather. Her mother, Ruth Schmidt was born in 1913 in Germany as the illegitimate daughter of a German Aryan mother and a Jewish father from Poland.

When World War One began Ruth's father disappeared. She was just four years old in 1917, when she and her younger brother Hans were placed in a Christian orphanage in Dresden by their mother. She remained there until she was 14.

Children's home in Dresden. Ruth and Hans Schmidt are nearest the camera.

Ruth was six years old when the war ended. Her father had survived the war and came to claim his children from the home. Incredibly Ruth was given a choice by the Lutheran staff who ran the orphanage.

She was told she could stay with Jesus in the orphanage, or go with her father. Because she had been brought up in the Christian faith she chose to stay in the orphanage. She never saw her father again. She thought it likely that, being Jewish, he was later killed in the Holocaust.

Ruth left Germany in 1939, eight weeks before the outbreak of World War Two, and settled in England. In the 1980s she moved to Cardiff to live close to her two daughters, where she lived until her death in 2000.

Kristina started searching for her Jewish grandfather. Luckily he had an unusual name: Chaim Levy Rotblatt, which he changed to Herman Jordan, a fact she only learnt much later. Sadly, by the time her mother died she had made no progress, but nevertheless continued her quest.

Four years ago, Kristina entered his details on a Jewish genealogy website www.jewishgen.org and found his name. She contacted the person who had entered his details, and began a four year correspondence with Howard Rotblatt, even though neither could be certain whether this was the Chaim Rotblatt who would have been her grandfather.

After four years Howard and Kristina decided to undergo a DNA test to confirm their relationship. In August 2010 they discovered that they were indeed first cousins once removed; their fathers were brothers.

Kristina has since been to New York with her daughter, and met her mother's half brother Fred. Her mother's half sister Charlotte lives in Ohio. Kristina's mother's middle name was Charlotte, suggesting that Ruth's father must have named his second daughter after the one he lost.

Howard's family were able to help fill in the details of what had happened to Ruth's father in those missing decades.

Interned during World War One

Chaim had been interned in Austria for the duration of the Great War. He was unsuccessful in claiming his abandoned children following the end of the war, and went to live in Vienna where he married and had a second family.

Sadly his wife perished in Auschwitz, but he and his two children, Charlotte and Fred survived. Fred, aged 13 at the time, was one of the children evacuated to Britain on the Kindertransport. Chaim spent World War Two in hiding in Belgium and later emigrated to America where he changed his name. 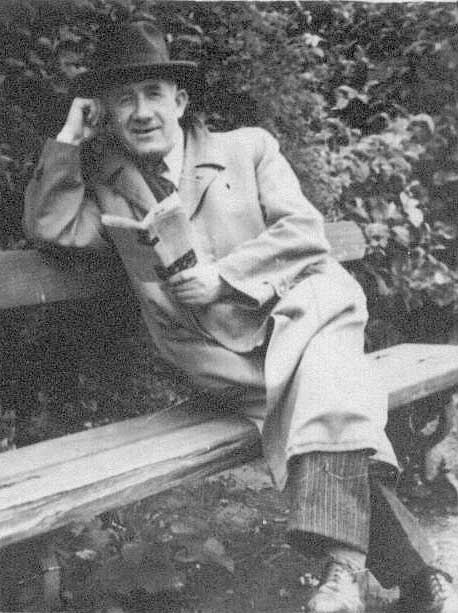 Further intrepid research by Kristina confirmed that Ruth's full brother, Hans, was released from the children's home in Dresden aged 14. Amazingly he hid the fact he was Jewish and became a driver during World War Two. After the war he worked as a policeman in East Germany under the Communist Regime. Hans died in 1989, just weeks before the fall of the Berlin Wall.

Many of Kristina's questions had been answered, but one issue remained unsolved.

Among her grandfather's possessions was an undated studio photograph of a little girl. On the back in Yiddish it says "My daughter aged 3".

Could this possibly be Ruth? Could Chaim have treasured this photograph all his life, through two world wars and moving between countries and continents? 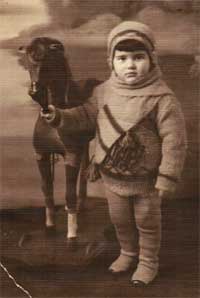 On the back of this photograph, in Yiddish are the words "My daughter aged 3"

I was sent the photograph and quickly realised that I was going to need the help of another expert. I recalled that each month in the Who Do You Think You Are magazine there is a section on how to date photographs, so I sent off the photo of the mystery girl to Dr Rebecca Arnold who works at the Courtauld Institute of Art in London.

Her reply was swift and truly incredible.

The knitted trousers that the mystery little girl was wearing came from a Woolworth's knitting pattern only published in 1916.

This was the year that Ruth Schmidt would have been aged just three. The year before she was placed in the orphanage and the last fond memory that Chaim would have of his daughter.

It's such an incredible story that Kristina decided to write a book, Tied With An Easy Thread, which has since been published.