From Cardiff Arms Park to the Millennium Stadium

Out of all the international sporting arenas in the world, Cardiff's Millennium Stadium has to be the most convenient and one of the most iconic. It sits on the banks of the River Taff in the centre of the city.

It is an ideal location that makes a visit to Cardiff special every time the Six Nations Championship is held. People come for the rugby and the celebrations - or commiserations - afterwards. Yet what many visitors don't realise is that the ground also sits in an area that has always had important social and historical connections. 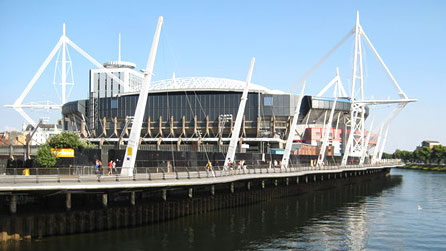 The original sports ground - and it was "sports", not just rugby - was named after an old hotel that used to exist on the spot where the Angel Hotel sits today. The original Cardiff Arms Hotel was knocked down in the late 1870s but its name lived on in the shape of the wide tract of open land that was once just a stone's throw from its front door.

The land, like many of the open spaces around Cardiff, was owned by the Marquess of Bute and, due to his munificence, was used for all types of activity, from parades and shows to concerts and, most importantly of all, for sports events.

A home for cricket

Cricket was the first major sport played on the land but any real development of the area was hampered by the fact that it lay so close to the Taff and was, therefore, always liable to flooding whenever there was anything like a heavy downpour.

A plan to take out the bend in the river - in all fairness, to suit the requirements of the Great Western Railway rather than to develop the sports facilities - resulted in the GWR's chief engineer Isambard Kingdom Brunel adding one more to his list of major achievements. The work was finished by 1853 and the scene was set for Cardiff Arms Park to start really developing.

The growth of rugby as a major sport in Wales dates to the 1870s, the Welsh Rugby Football Union being established in 1881. Soon the Arms Park was home to Cardiff Rugby Club and, increasingly, to the Welsh team as well. In the early days, international matches were played at various venues in Wales, in particular at St Helen's in Swansea, but gradually - as Cardiff's importance as a port and trading centre increased - the Arms Park came to be seen as the real home of Welsh rugby.

As well as rugby and cricket, soccer was also played at Cardiff Arms Park. Not until 1910, when Cardiff City created their pitch at Ninian Park, did soccer finally leave the ground.

New stands were built in 1885 but flooding was still a regular hazard and in the final decade of the 19th century new drains were laid in an attempt - not really successful - to solve the problem. It did not stop the ground, and the sport of rugby, becoming increasingly popular. When Wales entered their first "Golden Era" at the beginning of the 20th century the national team was undefeated at the Arms Park for 12 years.

The 1930s were a difficult time for Wales and for the Arms Park. Yet, somehow, they struggled through. For a while there was talk of the Welsh Rugby Union leaving the ground and decamping to Bridgend but, in the end, it came to nothing and, instead, the decision was made to revamp Cardiff Arms Park. New stands were built, including a brand new North Stand as well as new changing rooms for the players.

It was too good to last and in 1939 the outbreak of World War Two brought more problems for the Arms Park. The ground was seriously damaged during an air raid by German bombers on 2 January 1941, the North Stand being totally destroyed as well as bits of the South Stand and West Terrace. It was not until the early 1950s that the damaged stands were finally replaced. Perhaps more importantly, several of the drains under the pitch were also destroyed and this led, once again, to serious problems with mud, water and flooding in the post-war years.

Despite this, in 1953 the WRU made the announcement that, in future, all home international matches for Wales would be played at Cardiff Arms Park. And it was not just rugby. For the 1958 Empire Games the Arms Park acted as an athletics ground with a cinder track - state of the art facilities back in the 1950s - being built around the rugby pitch. 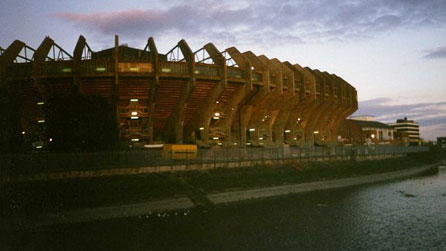 Since 1922, when the 4th Marquess of Bute sold the land to the Cardiff Arms Park Company for just £30,000, the Arms Park had been given to Cardiff Athletic Club on a 99 year lease. For a while both international and Cardiff sides continued to use the same pitch but, in 1962, a decision was made to split the Arms Park into two distinct grounds, one for international games, the other for use by Cardiff RFC.

With Cardiff's ground now located on what was once the county cricket pitch, Glamorgan Cricket Club moved into a new home at nearby Sophia Gardens. Cardiff Athletic Club surrendered their lease to the WRU and a debenture scheme was launched to fund the project, enabling debenture holders to buy match tickets for the next 50 years.

It took almost 17 years for the new National Stadium to become a reality. And then, within a dozen years the new ground was already dated and, in the eyes of some, unsafe. Consequently, yet another new development was proposed.

This was for the revolutionary Millennium Stadium, a facility that cost somewhere in the region of £150 million and would, when completed, provide Wales with state of the art sporting facilities. The finished stadium had a fully retractable roof and turf that could be grown in pallets to enable easy replacement of damaged grass.

With the new stands only partially finished, the first match at the Millennium Stadium was against South Africa. Wales duly won by 29 points to 19, a suitably fortuitous result. The stadium went on to host matches in two Rugby World Cups. For a short period at least, Cardiff Blues - as they had become known - moved out of the Arms Park to play at the Cardiff City Stadium but an announcement in May 2012 pleased most true rugby (and Cardiff) fans - Cardiff would be returning to the Arms Park.

Since its opening the Millennium Stadium has hosted concerts, football matches and boxing tournaments and is regarded as one of the finest entertainment and sporting venues in the world.

It is all a very far cry from the early days of Cardiff Arms Park when players had to change in the hotel across the road and, if it should happen to rain, spectators and players alike slowly sank into a wet and smelly bog.