In one of my recent blogs I wrote about finding an old postcard addressed to Lil Wilson.

It was posted in 1918 from her friend Gladys and sent to Lil's address of 10 Mountjoy Street in Newport. I found it on my computer when I was cleaning old files. 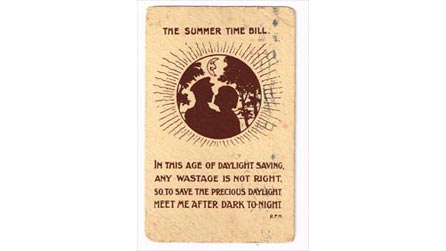 Just a line to say I am having ripping good time. Trusting you enjoyed yourself, which I have no doubt. I went to a dance last night. I can tell you Dear there were plenty of sailors and midies. I should very much like you to be here with me as times are jolly...ta ta for now, with love Gladys xxxx

We bought it at the flea market in Abergavenny back in 2005 as part of a programme idea for Look Up Your Genes, BBC Radio Wales' family history series. The idea was to reunite the postcard with Lil's family.

And at long last I am pleased to be able to report that I have finally managed to trace Lil's family.

In research, as in life, some things are easy and run smoothly and others are not so easy, and there is a temptation to give up. This search was one of those times when I kept wishing I'd never even had the idea in the first place!

Let's just say that looking for a Lil/Lily/Lilian Wilson in Newport without knowing her age or her parents' names was a challenge. But then I had a Eureka moment.

In 1918, Lil may not have had the right to vote but her parents or possible siblings might have while living at 10 Mountjoy Street.

Normally I'd rush off to the relevant county archives but this time I decided to send an advance email to Gwent Archives in Ebbw Vale. This was lucky because they replied to say that old copies of the electoral registers for Newport were not held by them but by the main reference library in Newport itself.

When I got to the library in John Frost Square I asked for some help. I was guided towards shelves heaving with old copies of electoral registers, as well as bound indexes of absent voters (which basically covered any soldiers who were away fighting during World War One).

To my amazement the absent voters' list was easy to use - once the librarian had utilised their ever powerful local knowledge to inform me that Mountjoy Street would have been in the Tredegar Ward - and I quickly found what I had started looking for in 2005! 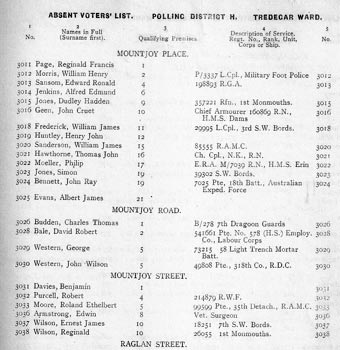 Clearly listed is number 10 Mountjoy Street, even if is rather confusingly located next door to Mountjoy Road and Mountjoy Place.

The names of Wilson, Ernest James number 18251 of the 7th South Wales Borderers and Wilson, Reginald number 26055 of the 1st Monmouths jumped off the page.

Fortified by finding these details I tried the main electoral registers to see what else I could find.

In 1920 Lilian Wilson was registered at that address. Next to her name was the letter O, indicating that she was eligible to vote.

In 1923 there was no sign of Lilian but I was glad to see that Reginald had returned home safely after the war and was living at number 10 again with Alfred Wilson and also Harry Glynn and Leslie Parry Jones.

The librarian suggested I try John's Newport Directory, which is a local trade directory similar to the our modern yellow pages but which also lists private residents if they had requested their details to be published.

John's Directory showed that in 1917 a lady named Mrs Margaret Wilson lived at number 10; in 1920 it was Miss Lilian Wilson but by 1923 it was Mrs Lilian Jones.

A quick scan of the marriage indexes on FindMyPast, which is free in the library, revealed that Lilian Wilson had married Leslie Parry Jones in 1921. Another click lead me to the digital image of their marriage certificate - again free of charge as I was in the library - and this confirmed both their ages and the name of her father, John.

Tracking down the Wilsons

So all that remained was for me to find a living member of the Wilson family and this is just the sort of thing that Genes Reunited was created for. So I pinged off some emails and waited patiently for a reply.

The 1911 census showed Margaret Wilson aged 53, a widow living with four children Ernest 17, Lilly 15, Reginald 14 and Alfred 9. But it also confirmed that Margaret had had nine children, two of whom had died and that incredibly she had married 36 years ago.

My maths told me that 1911 minus 36 equals 1875 but, try as I might, I couldn't find an entry in the marriage indexes for John Wilson marrying Margaret in 1875.

Luckily, though, I received a reply to my message from a man who was Lilly's great nephew and he was able to confirm that Lilly's closest brother Reginald had married Gladys Peake in 1924 and that two of their four children were still alive and living in Newport.

I am truly glad, and a little bit relieved if honest, to say that finally the postcard has made its way home again. It's been an incredible journey and just goes to show that perseverance pays.