Last week I had a day out in Ebbw Vale and spent several happy hours tucked away in the old steelworks that now house the Gwent Archives. I couldn't think of anywhere I'd rather be, especially when it was raining yet again.

I'd gone with two research projects in mind but was immediately sidetracked by an incredible video art installation, something I can honestly say has never to me happened before.

The sound of a melancholic cello drew me into a room where Nerea Martinez de Lecea's We Are Still Here was playing. It is a story about the red dust that covered Ebbw Vale during the steel production process, resulting in much of the surrounding hills, buildings, cars, laundry and even sheep getting covered in red dust.

My plan at the archives was to unearth some of the most unusual or quirky items that had been deposited with them. Their budgets don't always allow for the purchase of vast quantities of documents and so most archives rely on the generosity of local individuals, businesses and organisations to donate documents and items which might be of local historical interest.

In the Denbighshire Record Office, which is based in the old Gaol in Ruthin and well worth a visit even if you don't have any interest in family history, they have some weird and wonderful things in their Glyndwr Collection.

This is a collection of family papers from Edward Hughes (1862-1938) and his family from the Wrexham area. Objects include part of a zeppelin, onfederate bank notes, a package of Russian tea and a lottery ticket dated 1793.

Not the average household contents, I agree, and I can't help but wonder at how these were obtained. Perhaps Mr Hughes was travelling home from Hughesovka in a zeppelin drinking tea winning a card game with an American gentleman!

Other items deposited in the past include the diaries of local soldiers from World War One, minutes from Freemasons' meetings, a passport belonging to the travel agent Thomas Cooke from Newport dated 1845 for a trip to Russia, and the diary of Reverend LW Williams of Newbridge detailing his 1902 voyage across the Mediterranean and Black Seas.

There is also a vast collection of personal documents donated by the Rolls family, including Baron Llangattock of the Hendre, Monmouthshire. The most famous recent family member was Charles Stewart Rolls (1877-1910) , who after meeting Henry Royce in 1904 went onto create the Rolls-Royce. Sadly he was the first Briton to be killed in a flying accident, during a flying display near Bournemouth at the age of just 32.

But it his grandfather John Etherington Welch Rolls (1807-70) who appears to have led a really fascinating and affluent life. There are invitations to the coronation of George V, sketches of monkeys, navigational charts, alphabetical lists of yachts and letters signed by Charles Dickens and Florence Nightingale to name just a few of the curious items.

One of the archivists suggested I ordered D361/FP4/41. And I was amazed at what appeared just a few minutes later. 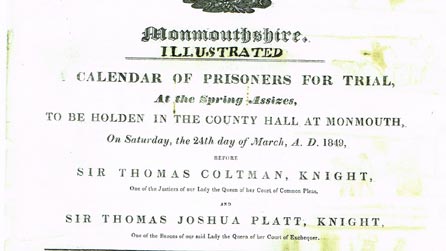 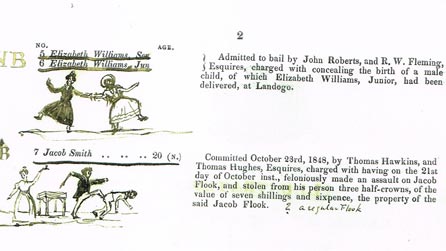 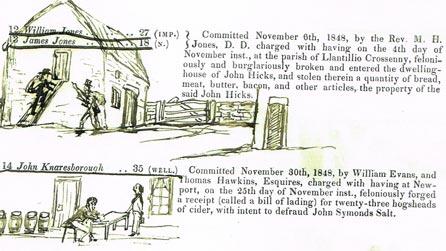 Clearly J E W Rolls was sitting on the jury during a very long day in 1849 and like most of us he was tempted to doodle. The end product is 6 pages of finely drawn cartoons illustrating the offences of each of the 60 prisoners in turn.

It has been well preserved and despite its sepia tint and age is robust and not torn or fragile in any way, thanks to how it has been stored in the past and is now being cared for by Gwent archives.

If you think you might have an item lurking in your attic or under the stairs in a dusty old shoe box then why not donate it? On their website Gwent Archives state that they are:

"Always pleased to accept new donations and deposits of records which... can come in many formats, from hand-written deeds and documents to typed minutes, maps, photographs or films. They can be the records of individuals or of societies, businesses or other organisations. Records do not have to be "old" and can relate to the recent past. You may well be surprised at the items we are interested in - we are trying to reflect all aspects of life in the Gwent area."

If you have something you would like to offer to a county archive then you can decide whether to donate the documents, in which case their ownership will pass to the Archives. Or, you can offer an item on indefinite loan, where the ownership remains with the person who deposited it.

Perhaps if you have your mother's land girls' uniform in your attic or another item which relates specifically to women in Wales rather than a geographical location then why not approach the Women's Archive of Wales. Their aim is to identify, rescue and preserve materials relevant to women's lives, past, present and future by actively collecting relevant records, and arranging for their deposit in an appropriate, recognised repository.

I really urge you to visit Ebbw Vale and especially the archives and have a look at the art exhibitions on display. The archives are also organising free sessions to help people start their family history research and the next one is on Friday 27 July 2012 at 10am.

If you join the Gwent Family History Society, you can travel further afield with a trip to the National Archives at Kew on Saturday 14 July 2012.