The lakes of Wales

When we consider the geography of Wales we invariably think of hills and mountains. Yet Wales is also a country of lakes. They may not be huge or extensive, like those in Cumbria, but they are significant and they make up an important part of our topography.

In total, the lakes of Wales occupy a surface area only of about 130 square km, less than 1% of the country's total area. The Welsh for lake is llyn and many of our lakes are known by this epithet. Others, like Bosherston in Pembrokeshire or Keepers Pond at Blaenavon, are known as ponds or, as in the case of Kenfig outside Bridgend, as pools. 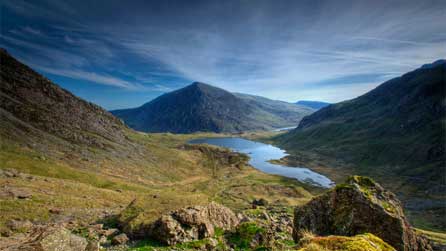 In Snowdonia National Park alone there are about 250 of these lakes but they are small in size and relatively shallow in depth. Several lakes are to be found in the corries below mountainous summits like Snowdon and Glyder Fawr, the very nature of the landscape keeping them small in size.

This is not the place to discuss the reason for the formation of the Welsh lakes. Suffice to say that in the hills and mountains of places like Snowdonia glacial erosion thousands of years ago caused the creation of the lakes while, nearer the coast, the sand bars and dunes created by the tides helped to create the lake systems. 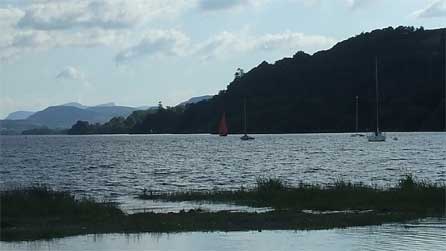 The largest Welsh lake is Lake Bala. It is just 6km in length, shorter than many of the reservoirs that dot the Welsh landscape. The largest lake in the south of the country is Llangorse. It is a shallow stretch of water, ideal for recreational use - like many Welsh lakes.

Welsh mythology is as fascinated by the lakes of the country as by the mountains and there are dozens of tales about these lonely but atmospheric stretches of water. 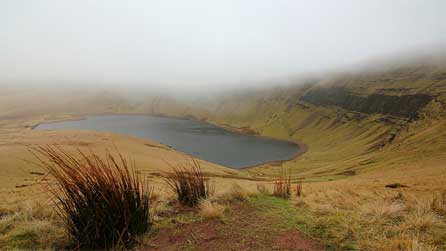 The legend of Llyn y Fan Fach is perhaps the best known. The lake sits on the side of the Black Mountain and, according to the legend, one of the sons from a nearby farm fell in love with and married a beautiful woman who appeared out of the lake.

The farmer had pledged never to strike her but, by accident, he struck her on three separate occasions. As she had vowed, the woman went back to the lake , leaving her husband devastated. She later appeared to one of her sons, giving him the secrets of herbal medicine. The sons became doctors, the first of the famous physicians of Myddfai. 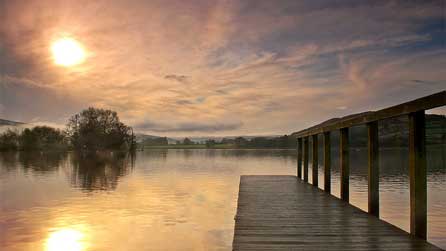 Both Bala and Llangorse lakes are said to cover "drowned cities", the bells of their churches audible to the human ear whenever conditions are right. That may be mere legend but the waters of Kenfig Pool do cover the long-lost town of Kenfig, a habitation covered first by the sand, then by the water of the area. 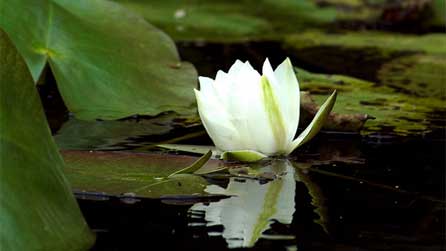 Bosherston Ponds on the south coast of Pembrokeshire are thought by many to have Arthurian connections. Although the modern lake was created by the Cawdor family from nearby Stackpole in the 18th century, there has always been an extensive stretch of water here and, according to legend, this was the lake where Bedwyr threw Excalibur after the death of his beloved king.

These days the lakes of Wales are used for many purposes. Whereas, previously, they were used to transport industrial produce, most of them are now used as reservoirs, either for domestic purposes or for powering hydro-electric schemes. The Dinorwic Scheme in north Wales is a classic example of this.

Tourism is another major user of the lakes these days. Bala and Llangorse are both well-used for boating, water skiing, canoeing and the like - where once, many years ago, human settlement began around the shores and flat areas bordering the lakes, now there are holiday sites, tents and caravan parks.

For those interested in flora and fauna there is plenty to look at in and around the Welsh lakes. At Bosherston you will find glorious water lilies and most of the lakes contain at least some brown trout. Visiting birds are also well represented.

The lakes of Wales are rich and varied in history and nature - well worth remembering the next time you decide to head off into the hills.