Last week's article involved the creation of an A-Z of family history resources and it got me thinking about what comes after Z.

In the General Register Office (GRO) birth indexes once you get to the end of each quarter you can often find a small separate list of individuals, all alone and unable to be processed in the same manner as the other births because their names are unknown.

These are foundlings. The people who come after Z. 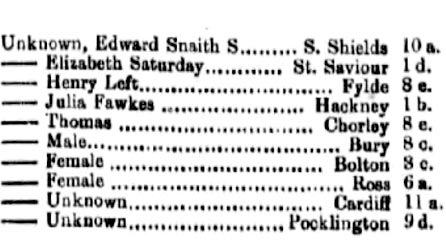 Input a name like William Young into Ancestry or another website where you can view the original image of the birth index. Keep scrolling through until you get to the last page, where the surnames beginning with Z are indexed.

At the very end you should find a small group of forlorn babies whose parents felt the best option would be for their child to have a better life without them.

So children baptised in the parish church of St John were named John, but as shown below others such as Elizabeth Saturday take the name of the day of the week, and I guess that Julia Fawkes was found on 5 November 1881.

Over the past few years I've been asked on several occasions to help with research into foundlings, twice on behalf of foundlings who are desperate to find some biological connection or simply some answers to the daily question of "who am I and where do I come from?"

Each time I find myself hoping that this will be the time where I can actually use my research skills to help. But so far I haven't been able to help at all. Maybe by publishing their stories in this blog I can help in a small way.

Ioma Jones contacted me from her home in Ireland to ask for help tracing further information relating to her great grandmother. Family legend was that she was left on a doorstep in Cwmbach in Glamorgan but unfortunately Ioma has such few details it's hard to even pin down the correct birth entry for her grandmother Eleanor Evans, later the wife of Harry Russell. Ioma knows they were buried in Brithdir so perhaps someone in that area might know more. Do get in touch.

For once it might well have been easier to find Ioma's great-grandmother if she had been born in London as she may well have been one of the 27,000 children who passed through the doors of the Foundling Hospital between 1739 and 1954. Yes, that's not a typo - it does say 1954!

The archives relating to the Foundling Hospital can be searched in the London Metropolitan Archives, although I fear that that is where the family history trail will end for those who have a foundling ancestor.

But what if you were a modern day foundling?

In 1960 David was found wrapped in a rainbow coloured blanket on the doorstep of a second floor flat in Golders Green. To read more about David's story visit his blog therainbowbaby.blogspot.co.uk.

David and his partner Julie have searched long and hard into every possible lead including testing his DNA. The results pointed to Scottish borders ancestry on the male side, but with no close matches (his DNA analysis is 90% Western European, 10% SE Asian). With time it is possible that someone who knows something about his story will decide to come forward or the DNA database throws up a match.

I was asked to get involved because there was a potential Welsh link, albeit a very tenuous one. A Welsh man, Richard Hamer who was born in Rhayder in 1899, lived in a neighbouring flat to where David was abandoned. The aim was (or is) to trace the descendants of Richard Hamer and ask them to provide a DNA sample. Even if this only results in that family being eliminated from the list of possibles it would mean a great deal to David.

In April 2011, BBC Three broadcast a documentary about a baby boy found in 1986 at Gatwick airport. Steve Hydes, now 25, was found as a 10-day-old baby on the floor of a ladies toilet in Gatwick airport. I was asked to try and help find his mother. I like a challenge but this task needed a magic wand!

Steve's DNA was compared to a global genetic databank of millions of individuals and from this, a number of individuals who are Steve's seventh or sixth or even, in one case, fifth cousin were identified. For most of us this would be too distant to be of any real interest but if you have no knowledge of your biological heritage then I imagine that a fifth cousin might feel like finding a twin.

In 2000 Germany introduced 'baby-drops' where mothers could anonymously leave babies they were unable to look after themselves in the knowledge that they would be properly cared for. Now a network of some 80 'hatches' exist across Germany and similar schemes exist in Japan, Pakistan and the Philippines.

Clearly having a foundling in your family is not only a thing of the past and is certainly much more that the famous fictional foundling, Oliver Twist.