The wind that afternoon was cutting, slicing like a teachers cane through the air and down the grey length of Pembroke River.

Small waves slapped in against the mud and shingle on the Bentlass side of the stream but out in the centre of the river the tide was fierce and strong. With the tide flooding fast, the waves were several feet high and the current, always dangerous and unpredictable on this stretch of water, was running strongly. 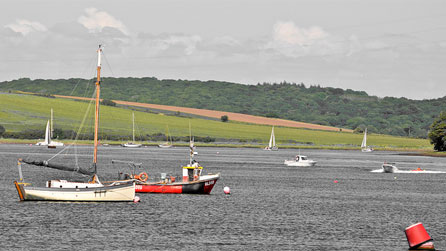 It was Friday 8 February 1889. For over 30 years John Jones had operated a ferry - no more than a large rowing boat with a sail - between Bentlass on the southern flank of the river and Lower Pennar on the north. The ferry carried men from places like Castlemartin and Angle to work in the Royal Naval Dockyard at Pembroke Dock and then, when their days work was done, took them home again.

Operating out of the Salt House in Bentlass, Jones also carried women on their way to do their weekly shopping in Pembroke Dock. And 8 February, being a Friday, was market day in the Pembrokeshire town. So, despite the weather, 14 women had made the journey and now, as evening began to close in, they had trooped together up the hill from the town, their arms full of purchases and shopping bags. Now they stood waiting patiently for Jones the Boatman on the Ridge at Lower Pennar.

John Jones found it a hard pull across Pembroke River but he was an old hand at the game. He knew the river well, knew it in all its guises, and despite the conditions out in the centre of the stream he was not unduly worried. Besides, as he was getting older, these days he had a young boy to help him on the oars.

The ferry grounded on the Ridge and all 14 women crowded impatiently onto the boat. Quickly Jones pushed off, eager to be back on his own side of the river.

By the time they had reached mid stream the ferry boat was pitching wildly in the waves, spray and spume thundering off her sides. Sometimes breakers smashed into her side, sending water pouring over the gunwales and soaking the heavy dresses of the women passengers. Still John Jones was not unduly worried.

What happened next is more guesswork that hard historical fact. It is thought that one of the women panicked and leapt to her feet to avoid one of the breakers. The ferry boat, unbalanced by the sudden movement, dipped her side into the water and almost immediately another breaker hit her. Gallons of water poured into the vessel and she began to settle swiftly by the stern.

Within seconds the river was a mass of struggling bodies as passengers were pitched into the waves. Jones' young helper jumped desperately over the bow and began to strike out for the shore, now no more than 20 or 30 yards away. Before he had gone a few feet the frantic figure of a terrified woman heaved out of the water and clutched at his shoulders for help.

There was a brief struggle, then both boy and woman disappeared beneath the waves. By now would-be rescuers had appeared on the river bank, summoned from their houses by the screams of the passengers. Some of them waded into the river, desperately trying to reach the terrified passengers drowning before their eyes, but it was no use. The current was too strong.

By nightfall the full extent of the tragedy had become clear. Fourteen female passengers, Jones the Boatman and his young helper had all perished, drowned in the muddy waters of Pembroke River, just a few yards away from safety.

For the men and women who gathered on both sides of the river there was little they could do to help. All hopes of rescue and survival had gone; now all they could do was gather in the bodies.

As night fell, the debris from the disaster began to float ashore on the incoming tide - parcels and packages so recently bought from the market stalls in Pembroke Dock, shopping bags and pieces of the heavy, saturated clothing that had undoubtedly helped to pull the women down.

The disaster of the Bentlass Ferry has, now, been largely forgotten. In the grander scheme of things it was a fairly minor event. But it was a devastating blow for those small communities around the Pembroke River. Men had lost wives, children had lost their mothers, all part of the human tragedy that so often makes up the history of Wales.