The birth of Barry Docks

Visitors to the seaside town of Barry, six or seven miles to the west of Cardiff, might be forgiven for thinking that the place held nothing more important than a pleasure beach, a fun fair and a few empty docks that seem to have little or no purpose.

Yet there was a time when Barry was the largest coal exporting port in Britain, possibly even the world. That may have been a long time ago and the town's days of glory may be gone, but what a glory they were. 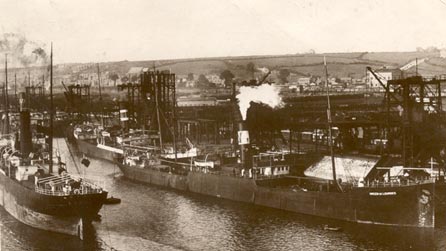 The development of Barry as a port was down to two things - the rapid growth of the south Wales coal trade and the dynamic personality and business acumen of David Davies, the first Welsh millionaire.

The area around Barry has been occupied since earliest times, Mesolithic flints having been found at Friars Point on Barry Island and the remains of an Iron Age fort having been uncovered on the promontory at Porthkerry.

The Romans knew the area well, one of their retired soldiers building a villa at nearby Llandough. The raiding Norsemen named the two islands out in the estuary - Steep Holm and Flat Holm - while the Normans (themselves of Viking origin) came to settle and stay, erecting a castle at Barry itself.

The town - if it can justify such a title - was badly hit by the Black Death in the 14th century and, while the place continued to function as a small port and trading centre, as late as 1871 the population was no greater than 100. Barry Island, just off the coast, was popular with locals and visitors alike who would make their way out to the island by boat or, at low tide, via a series of stepping stones. And that was it - until the coal trade arrived.

By the second half of the 19th century Cardiff, the main coal exporting port in Wales, had become something of a bottleneck. The docks, created by the Marquis of Bute, were large enough to cater for his own exports but other coal owners found themselves having to wait - as well as pay - not only to use the docks but also to ship their raw product down the valley.

The Taff Vale Railway, the main means of shipping coal down to Cardiff, became a single line track after Pontypridd and, because of the shape of the valley, there was no possibility of extending or developing the line. Many mine owners found themselves seriously hampered by what was, in effect, a monopoly in favour of the Bute concerns.

In 1883 a group of these mine owners, headed up by the enormously wealthy and dynamic David Davies, owner of the Ocean Collieries, formed themselves into a cabal or group and sought permission to build a dock at Barry, serviced by a new railway.

The Taff Vale promptly opposed the bill and the proposal was dropped but Davies was nothing if not persistent. The following year the group was successful in gaining parliamentary permission for their enterprise.

Work began on the new dock at Barry on 14 November 1884, along with the construction of the new railway link. Everything was completed in double quick time and the dock opened for trade in 1889.

In due course, further docks were added and while exports in the first year were just one million tons, by 1903 they had multiplied to over nine million. By 1913, the year before the outbreak of World War One, Barry had surpassed both Cardiff and Penarth to become the largest coal exporting port in the country.

The docks themselves were surrounded by dozens of business enterprises, everything from repair yards and cold storage facilities to flour mills and shipping agents. Even in the 1920s, as a world-wide depression began to bite into the Welsh coal trade, there were still over 50 independent companies trading out of the docks area.

The town of Barry developed along with the docks. And, after 1884, with Barry Island connected to the mainland by a causeway, Barry became a unique combination of industrial centre and tourist destination. From the 1890s P and A Campbell ran their White Funnel paddlers from a pier in the docks and, realising the value of such an enterprise, the Barry Railway Company soon decided to run their own cruise ships from the area. 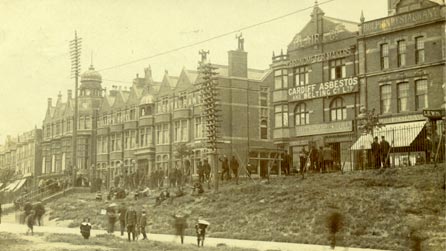 From the Eric Williams collection

Of course, it did not last. The inevitable collapse of the Welsh coal trade after the war left Barry and its docks stranded, without purpose or plan. The port struggled on, the arrival of the Geest Company in 1959, importing bananas from the West Indies, gave some degree of job security but when they moved out in the 1980s Barry, as a port, went into terminal decline. 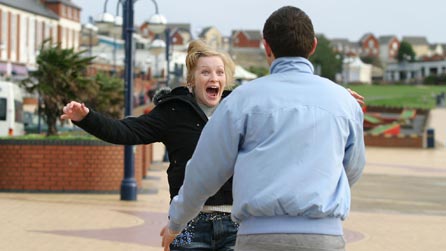 Gavin and Stacey was filmed in Barry

These days the old waterfront has been revamped and redeveloped, like so many other dockland areas. Parts of the old docks have been used in the filming of TV shows like Doctor Who and Torchwood and, of course, the television series Gavin and Stacey was both set and, in no small degree, filmed there. Barry Island struggles on - the old Butlins Holiday Camp, centre of so much entertainment on the island, closed at the end of the 20th century but the funfair and beach remain.

Barry has a glorious history, of which its people should be proud. It faces severe challenges in the years ahead but, with fortitude and the occasional backward glance, it should be able to pull through. It is no more than the town deserves.