Clough Williams-Ellis, the man who built the Prisoner's Village

Anybody visiting the Italianate village of Portmeirion in north Wales cannot fail to remember the 1960s cult TV programme The Prisoner. For a few years it was essential viewing and even now has a dedicated band of followers, many of whom regularly take trips to the strange but enchanting village where the series was filmed. Yet few people know much about the creator of that village, the English born, Welsh-based architect Bertram Clough Williams-Ellis. 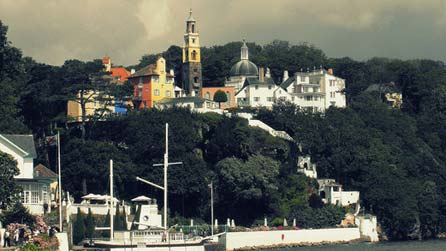 He was born at Gayton in Northamptonshire on 28 May 1883. His father, however, was Welsh - possibly being related to and descended from Owain Gwynedd - and when Williams-Ellis was just four years old the family moved back to north Wales to live. The young boy was educated at Oundle School and, later, at Cambridge where he studied natural sciences.

He left Cambridge without taking his degree, however, and being interested in architecture and buildings, began working for the Architectural Association. He only stayed there a for a few months before gaining more experience with a private company of architects. But when he was just 22 years old he decided it was time to 'bite the bullet' - he set up his own architectural business.

It was a brave move. Clough Williams-Ellis was not trained in architecture and was entirely self-taught. Fortune certainly favoured the brave because the young man never looked back.

He became one of the most popular and most innovative architects of the 20th century. He believed that it was entirely possible to create buildings that were in tune with the environment, that you could build houses or even a whole series of them without destroying the site on which they had been built; an unusual stance or viewpoint in the 1920s and 30s.

In 1908 Williams-Ellis had inherited a country house, Plas Brondanw, from his father. He began to re-model and re-design it (practising on it, in fact) and spent the rest of his life working on what became a long-term project. In 1915 he married the writer Amabel Strachey, daughter of the owner of The Spectator magazine, and had a distinguished war career in the Welsh Guards. He was awarded the Military Cross for bravery.

He began to build Portmeirion in the 1920s, opening it to the public in 1926. The village was far from completed and he continued to design and build more phases until the 1970s. However, some of his other buildings did not elicit quite the same level of approval as Portmeirion.

He also designed the café and summit building on Snowdon, a creation that was later to earn the disapproval of Prince Charles. The Prince called it "the highest slum in Britain" - although, to be fair, the building he saw was not the one designed by Clough Williams-Ellis. It had been vastly altered and redesigned by others in the 1960s.

One building of his that was well received was Lloyd George's house at Llanystumdwy, Ty Newydd. The house, now a writer's centre, still boasts a long room with a wonderful curved ceiling that seems to pick up sound and transmit whispers at one end to listeners at the other: a remarkable piece of engineering and architecture.

Bertram, Clough Williams-Ellis was awarded a CBE and knighthood in 1972. He died on 9 April 1978, renowned as one of the most important architects of his day. And anyone who visits the village of Portmeirion will testify to that fact.